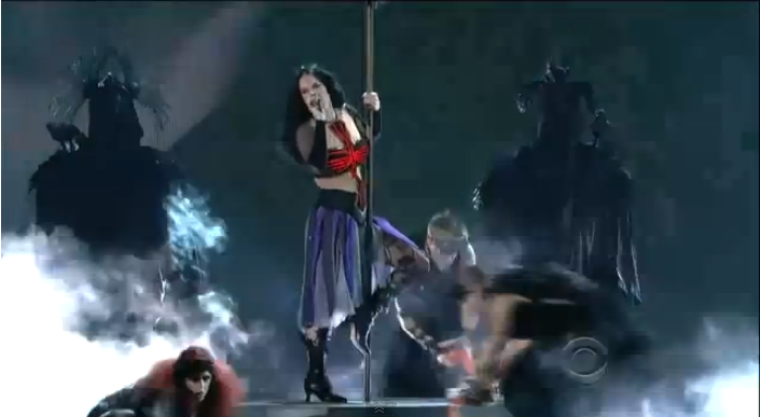 Katy Perry uses an upside-down witch's broom as a pole to pole dance in her "Satanic" performance of "Dark Horse" at Sunday's Grammy's. | YouTube Screen Shot 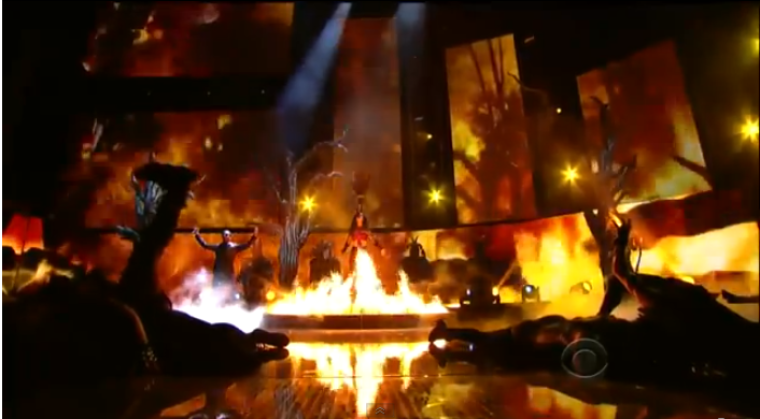 Katy Perry stands, dressed as a witch, behind a fire and in front of an upside-down broom, which doubled as broom stick and dance pole before she symbolized burning at the stake during Sunday's Grammy's performance. | YouTube Screenshot
View Photos

Award-winning gospel artist Natalie Grant left the Grammys early on Sunday, refusing to say why. Bloggers speculated that she left in response to Katy Perry's "satanic" performance or because of a mass wedding of 34 couples that included homosexuals.

"We left the Grammy's early. I've had many thoughts, most of which are probably better left inside my head," Grant tweeted that night. The artist kept her message positive, however, declaring, "I've never been more honored to sing about Jesus and for Jesus. And I've never been more sure of the path I've chosen."

Perry's performance involved many images evocative of the occult, including beasts, fire, and witchcraft. Opening as a witch cloaked in black, Perry pole-danced on a broom, and closed with a fiery ending – burning at the stake. One viewer tweeted, "Katy Perry promoting witchcraft, demons, magic, Satanism, the dark horse with demonic red eyes of the apocalypse ready for the perfect storm."

A 29-year-old raised in a strong Christian household, Perry rejected her faith in an interview with Marie Claire, where she declared that she does not believe in heaven or hell.

Nevertheless, bloggers speculated that the "Satanic" performance was not the only cause for Grant's early disappearance. During a performance of Macklemore and Ryan Lewis' "Same Love," 34 couples, straight and gay, were married.

One user tweeted at Grant, assuming she walked out due to the wedding: "Do you have any gay friends? Your hair, make up and stylists don't count," tweeted @jorgiecakes. Grant finished his sentence, tweeting that her stylists "respectfully disagree" that they "don't count."

Grant released a statement on Facebook on Monday , in response to all the speculation, saying, "It does sadden me when people argue, judge and hurl insults at each other from both sides of the fence."

She stressed, "I NEVER said I left during any particular performance. I only said I left early."

The artist also emphasized that she "never pointed out any one particular performance," but rather "said I had many thoughts about the entire show, which were best left inside my head and that is where they will stay."

"So those who say I condemned one performance but then condoned others clearly did not read the post," she wrote. "What I DID say is this: I am honored to be a part of the Christian music community. I've had many people throughout my career ask why I never tried to go in to mainstream music and last night was a beautiful reminder that I love singing about Jesus and FOR Jesus."

"I've judged no one. I hate no one. And I believe that every person has been created in the image of God," Grant declared. "I won't use my platform to engage in political arguments that will only divide and not unite."

Grant closed her statement, which has over 93,000 likes so far, with a thank you to the Grammys for her two nominations. "I'm so grateful that NARAS and The Grammys continue to recognize the contribution that gospel and Christian music make to the world," she stated.