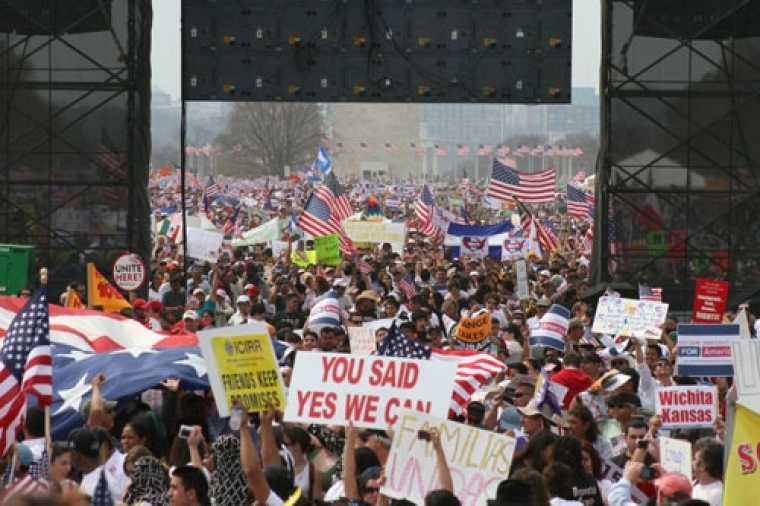 More than 200,000 people gathered at the National Mall to call on Congress to quickly overhaul the U.S. immigration system on Sunday, March 21, 2010 in Washington, D.C. | (Photo: The Christian Post) 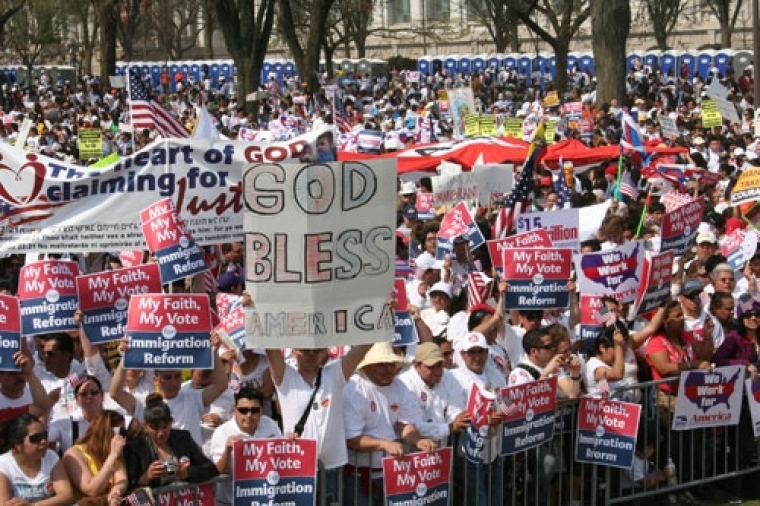 More than 200,000 people, including many from the religious communities, gathered at the National Mall to advocate for comprehensive immigration reform on Sunday, March 21, 2010 in Washington, D.C. | (Photo: The Christian Post) 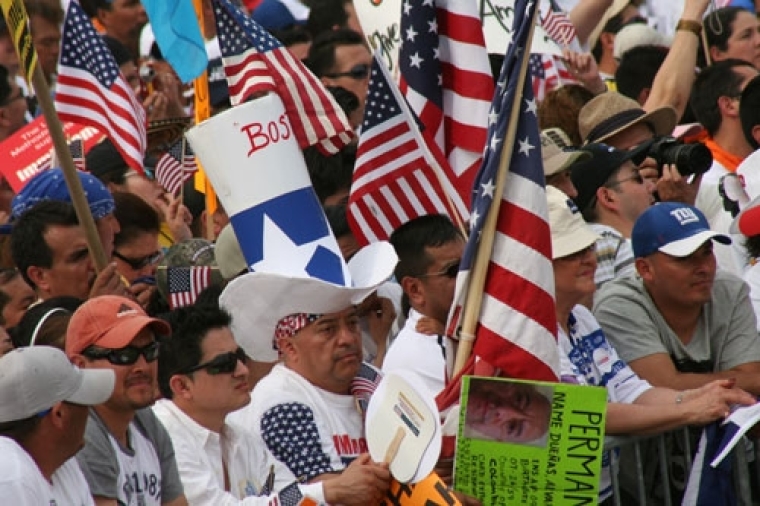 Participants at the pro-immigration reform rally at the National Mall on Sunday, March 21, 2010 in Washington, D.C. | (Photo: The Christian Post)
View Photos

Editors' Note: This is the second of a three-part series on the greening of the Hispanic community's participation in national politics, brought to the forefront by a decision by progressive Democrats to push gay marriage equality into the national debate over immigration reform.

The second article explores controversy within the Hispanic community over gay rights, and the third analyzes faith trends among younger Hispanics that may lead to an erosion of lock-step support for Democrats in favor of more independent voting status for Hispanics.

Prominent Hispanic organizations such as the League of United Latin American Citizens (LULAC) and the National Council of La Raza (NCLR) are backing provisions for gay couples in immigration reform talks – but Hispanic evangelicals want to keep immigration reform and gay rights as separate issues.

The question, sources say, is when Hispanics are asked to choose immigration reform over gay rights during the legislative process.

That moment is coming, according to Noel Castellanos Christian Community Development Association , CEO of the Christian Community Development Association and one of 150 Evangelical leaders who called for comprehensive immigration reform in Washington in January. He said trying to marry the gay rights and immigration reform agendas is too controversial and evangelicals have asked President Barack Obama to keep them separate.

"Right now, I can say as a general coalition we have talked to the President about trying to keep those two issues separate. It's very problematic," Castellanos told The Christian Post in a recent interview. But just last month in a submission to the U.S. Senate Judiciary Committee, NCLR president and CEO Janet Murguía argued for provisions for same-sex couples to be included in any new policy on immigration.

"Family unity has always been the cornerstone of our immigration system. We must address the unnecessary separation of families who are kept apart by extraordinarily long wait times for certain family visas, including the families of bi-national and same-sex couples," wrote Murguía.

In a USA Today report last month, Republican Sen. Marco Rubio noted that the more controversial attempts to marry immigration reform and a gay rights agenda becomes, the more difficult it's going to be to achieve reform. "I think if that issue (gay rights) becomes a central issue in the debate it's going to become harder to get it done because there will be strong feelings on both sides," Rubio told news site BuzzFeed online last month. And Evangelicals agree.

"Injecting a contentious social issue into the immigration debate calls into question the commitment to actually achieving immigration reform," Galen Carey, vice president of the National Association of Evangelicals, told USA Today. "Too many politicians in both parties are using the immigration issue to score political points. We need a laser focus on building bipartisan consensus on fixing our broken immigration system. The future for millions of immigrant families hangs in the balance," he added. "A lot of religious leaders (in the immigration reform process) would like to keep these issues separate," noted Castellanos. "I feel like I am open to the needs of same-sex families but as a Christian organization we are still promoting a view of family that's traditional."

Rubio forms part of a bipartisan group of eight Republican and Democratic senators who recently produced a blueprint for comprehensive immigration reform according to USA Today. Their plan does not include any provision for gay citizens to sponsor immigrant partners. Details of a plan by President Obama leaked in January, however, include support for same-sex couples. But according to Castellanos, "we [evangelicals] have got broad traction on these issues [immigration reform]. Evangelicals are not leading on what they are against, we are leading on what we are for and that's keeping families together [in the traditional sense]," he said.

He noted that if other Hispanic groups like La Raza and LULAC focused more on what's a common theme in each group seeking immigration reform – traditional families – everyone can win. "That's the big picture," said Castellanos. "That's the win-win."