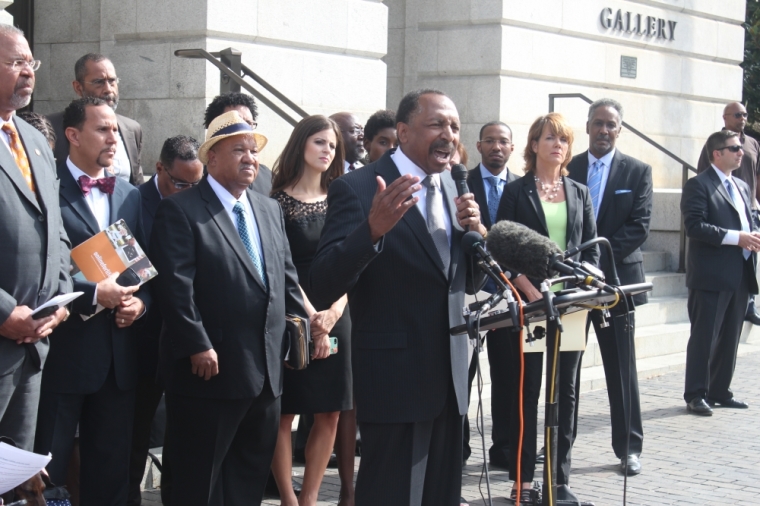 Bishop E.W. Jackson speaks at a rally outside of the National Portrait Gallery in Washington D.C. on August 27, 2015, where he other concerned pastors and activists called on the gallery to remove the bust of Planned Parenthood founder Margaret Sanger. | 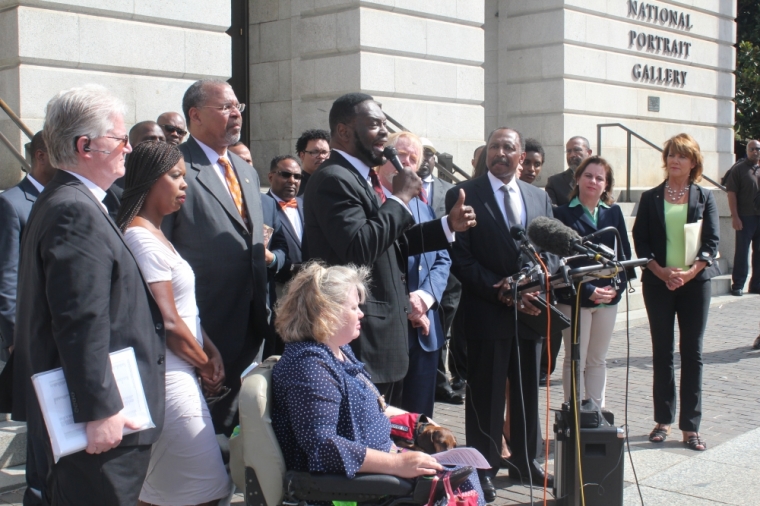 Bishop Harry Jackson speaks at a rally outside of the National Portrait Gallery in Washington D.C. on August 27, 2015, where he other concerned pastors and activists called on the gallery to remove the bust of Planned Parenthood founder Margaret Sanger. | (Photo: The Christian Post/Samuel Smith) 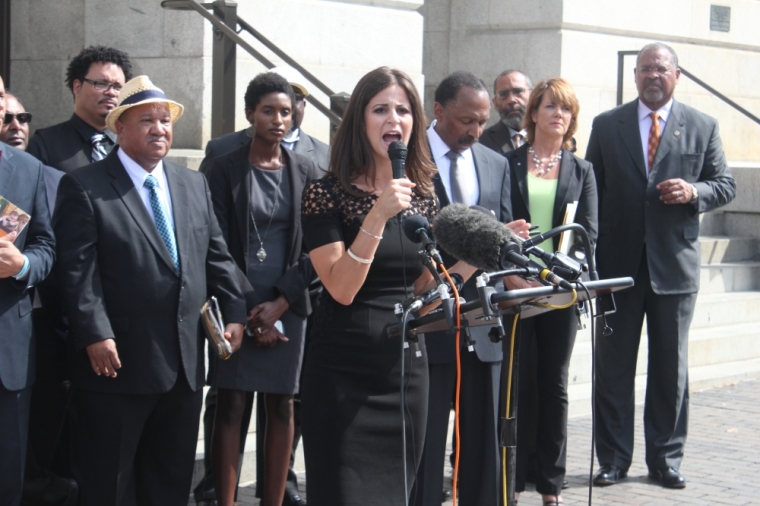 Lila Rose, founder of the pro-life group Live Action, speaks at a rally outside of the National Portrait Gallery in Washington D.C. on August 27, 2015, where she other concerned activists and pastors called on the gallery to remove the bust of Planned Parenthood founder Margaret Sanger. | (Photo: The Christian Post/Samuel Smith)
View Photos

WASHINGTON — Prominent black pastors and pro-life activists gathered in front of the National Portrait Gallery on Thursday to demand that the taxpayer-funded museum remove a bust of Planned Parenthood's white supremacist founder, Margaret Sanger, from the institution's "Struggle for Justice" exhibit.

After the National Portrait Gallery, which is run by the Smithsonian Institution, refused last week to take action on a letter sent by a coalition of 10 black pastors requesting the removal of Sanger's bust from the gallery, Bishop E.W. Jackson and the conservative group ForAmerica organized a rally Thursday morning to voice displeasure with the Gallery's decision to keep the bust.

Nearly 20 African-American pastors and pro-life advocates spoke at the rally and explained that Sanger, who established abortion organizations that eventually became the Planned Parenthood Federation of America, did not advocate for abortion and birth control because she wanted to help "disadvantaged women," but because it was her goal to use eugenics to eliminate what she considered people of "inferior races."

Jackson quoted a letter that Sanger sent to birth control advocate Dr. Clarence Gamble in 1939 about her Negro Project, which was Sanger's eugenics plan for black America. Jackson explained that Sanger told Gamble that three or four "colored ministers" should be hired to make sure that black people don't catch onto the fact they aimed to wipe out the African-American population.

"'We don't want the word to go out that we want to exterminate the Negro population and the minister is the man who can straighten out that idea if it ever occurs to any of their more rebellious members,'" Jackson quoted Sanger as writing in the letter. "No wonder the KKK loved her. She began her career by trying to reduce the population for black and other minorities through eugenics. The sterilizations that later happened in this country were largely inspired by Margaret Sanger's movement. One of her most favorite slogans was, 'More children from the fit, less from the unfit.' She said that was the chief aim of birth control. Another was 'Birth control to create a race of thoroughbreds.'"

"She referred to black people and others whom should be banned from having children as 'human weeds' and 'human waste,'" Jackson continued. "She said this, 'We are paying for, even submitting to, the dictates of an ever increasing, unceasingly spawning class of human beings who never should have been born at all."

As Sanger's bust currently sits in the same exhibit that honors civil rights champions such as Martin Luther King Jr. and Rosa Parks, the black pastors were adamant that Sanger's inclusion in the gallery's "Struggle for Justice" exhibit is a "slap in the face" to African-Americans and the Civil Rights Movement.

"The last thing we need is a white supremacist sitting between the bust of Martin Luther King and Rosa Parks," The Rev. Johnny Hunter, chairman of the Frederick Douglass Foundation, said. "That is a slap in the face of black folks and I hope the curator can understand that."

In response to the letter sent by the coalition Ministers Taking a Stand earlier this month, National Portrait Gallery Director Kim Sajet replied with a letter stating that the gallery will keep the bust because Sanger brought "medical advice and affordable birth control to disadvantaged women."

Jackson also explained that some studies have shown that the "black population is not being replenished and is therefore, in the long term, in decline as a result of abortion."

"We don't need to be spending tax dollars on someone who was a eugenicist and a racist and thought the same way Hitler did," Jackson asserted. "The woman was a racist and she was a genocidal figure in American and in human history and to honor her is be complicit in her evil and her racism. That is right, if you are honoring Margaret Sanger, you are joining together in her racist ideology."

"Having Margaret Sanger on display is akin to giving Joseph Stalin or Mao Zedong, giving them the Nobel Peace Prize," Blye said. "The Smithsonian's reasoning for having her there, particularly the reasoning based upon providing family planning, is akin to putting Hitler on display along with great European statesmen."

Bishop Harry Jackson, senior pastor of Hope Christian Church in Maryland, explained that honoring Sanger with the bust puts a stain on the racial progress that was made by civil rights leaders.

"Take down the bust because it is wrong," Jackson said. "If that bust remains in this place of honor it tarnishes the legacy of the Civil Rights Movement. So I say, with a resounding declaration, take down the bust."

"If you Mr. curator or Mrs. curator haven't spoken to Bishop Jackson and gotten this thing settled by October 10th, then in October, we are going to bring the real 'Black Lives Matter' movement here," Hunter threatened. "They are going to march from the Supreme Court and come down to the gallery and show you some real photos of what is going down. If you really want to do what is right, put Margaret Sanger's bust in the dirt."