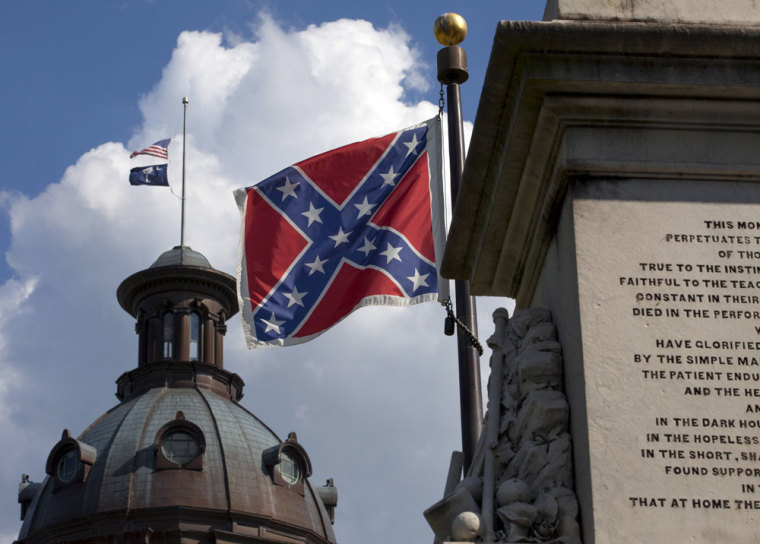 The U.S. flag and South Carolina state flag flies at half staff to honor the nine people killed in the Charleston murders as the confederate battle flag also flies on the grounds of the South Carolina State House in Columbia, SC June 20, 2015. | (Photo: Reuters/Jason Miczek) 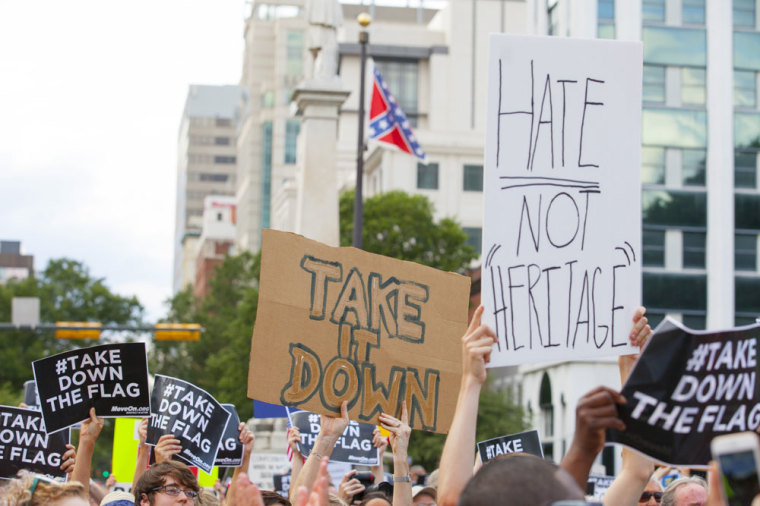 People hold signs during a protest asking for the removal of the confederate battle flag that flies at the South Carolina State House in Columbia, SC June 20, 2015. | (Photo: Reuters/Jason Miczek)
View Photos

The fatal shooting of nine unarmed African Americans in a South Carolina church by a white assailant has reignited the debate whether the Confederate Battle flag is a symbol of Southern heritage or a relic of white supremacy. Southern Baptist leader Russell Moore is calling for the Confederate flag to be taken down, but South Carolina Sen. Lindsey Graham is defending it.

The Confederate flag flying at full-mast from the South Carolina Capitol grounds, even after the "racist act of violence," raises the question of "what we as Christians ought to think about the Confederate Battle Flag," Moore, president of the Ethics and Religious Liberty Commission of the Southern Baptist Convention, writes on his blog.

Roof told authorities that he wanted to "start a race war" by doing the unthinkable.

White Christians ought to think about what the flag says to our African-American brothers and sisters in Christ, Moore writes, identifying himself as a "descendant of Confederate veterans."

"The gospel frees us from scrapping for our 'heritage' at the expense of others," he argues. "As those in Christ, this descendant of Confederate veterans has more in common with a Nigerian Christian than I do with a non-Christian white Mississippian who knows the right use of 'y'all' and how to make sweet tea."

The flag may mean many things, "but with those things it represents a defiance against abolition and against civil rights," he writes. "The symbol was used to enslave the little brothers and sisters of Jesus, to bomb little girls in church buildings, to terrorize preachers of the gospel and their families with burning crosses on front lawns by night."

The cross and the Confederate flag cannot co-exist without one setting the other on fire, Moore goes on to say, urging white Christians to "listen to our African-American brothers and sisters."

"Let's care not just about our own history, but also about our shared history with them … Let's take down that flag," Moore concludes.

However, Sen. Graham, a Republican presidential candidate whose home state is South Carolina, says the flag needs to remain in place as a heritage.

Speaking to CNN, Graham argued that symbolic items have not promoted racism, "but what's in people's heart." He called for a "balanced" approach, pointing out that the Civil War memorial honoring fallen Confederate soldiers and one honoring African-Americans are situated next to each other.

"It works here, that's what the Statehouse agreed to do. You could probably visit other places in the country near some symbol that doesn't quite strike you right," said Graham, who canceled campaign events in South Carolina following the massacre.

French, who is also from the South, writes in his column that the Confederate battle flag is a painful symbol to African-American citizens, especially given its recent history as a "chosen totem of segregationists." But he argues, "If the goal of our shared civic experience was the avoidance of pain, then we'd take down that flag." Quite the contrary, he adds, the goal is to use history "to understand our nation in all its complexity — acknowledging uncomfortable realities and learning difficult truths."

French notes that the war did not begin with an explicit aim to end slavery. "When hundreds of thousands of southern men took up arms (most of them non-slave-owning), many of them fought with the explicit belief that they were standing in the shoes of the Founding Fathers, men who'd exercised their own right of self-determination to separate from the mother Country. Others simply saw an invading army marching into their state — into their towns and across their farms — and chose to resist."

Removing a Confederate battle flag from a Confederate memorial wouldn't be any different from chiseling away the words on the granite or bulldozing the memorials themselves, he says.