Pontiff Challenges Americans to Be 'Vigilant' Defenders of Religious Liberty 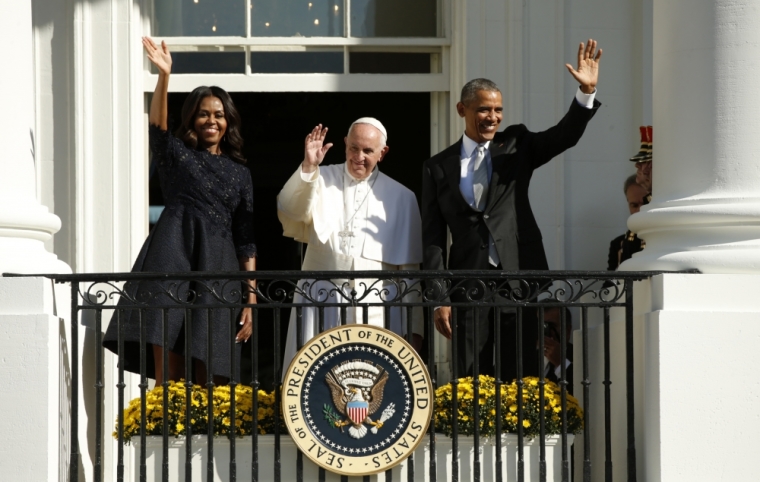 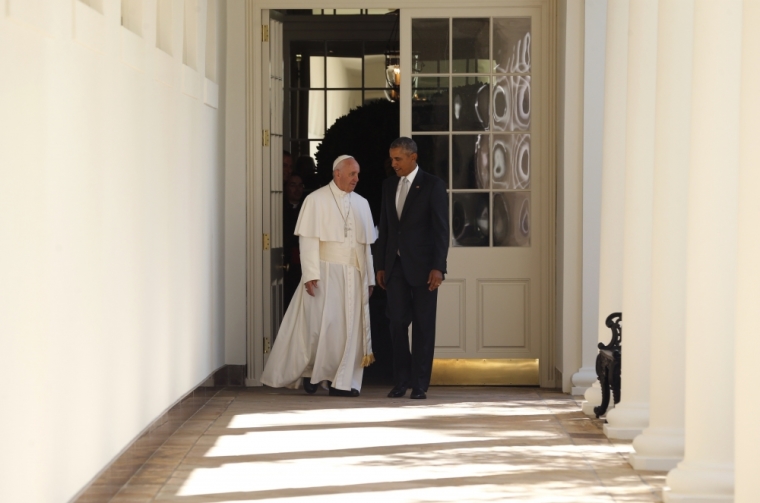 U.S. President Barack Obaka and Pope Francis (L) walk down the White House colonnade to the Oval Office during a welcoming ceremony for the pontiff in Washington, September 23, 2015. | (Photo: Reuters/Jonathan Ernst) 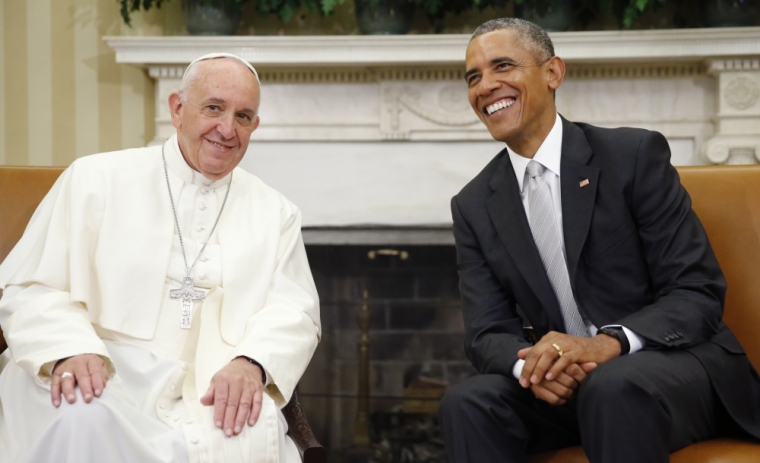 U.S. President Barack Obama sits with Pope Francis (L) in the Oval Office as the pontiff is welcomed to the White House during a ceremony in Washington, September 23, 2015. | (Photo: Reuters/Jonathan Ernst) 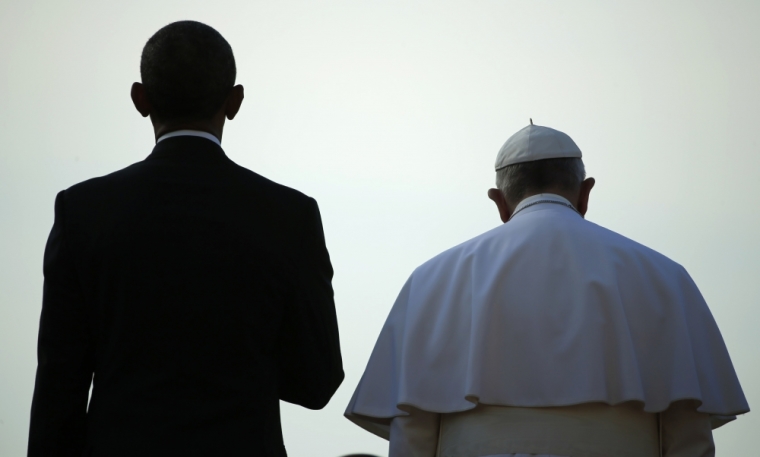 U.S. President Barack Obama (L) stands with Pope Francis during an arrival ceremony for the pope at the White House in Washington September 23, 2015. The pontiff is on his first visit to the United States. | (Photo: REUTERS/Jonathan Ernst) 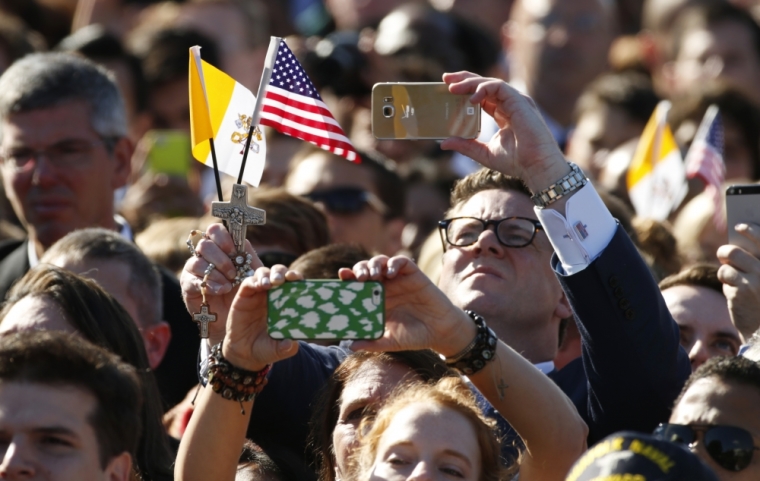 People take pictures during an arrival ceremony for Pope Francis at the White House in Washington, September 23, 2015. The pontiff is on his first visit to the United States. | (Photo: Reuters/Kevin Lamarque) 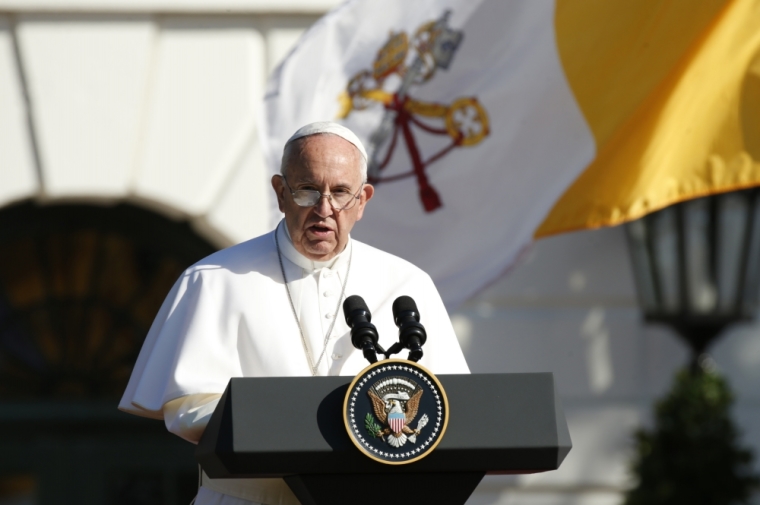 Pope Francis speaks during a ceremony welcoming him to the White House in Washington, September 23, 2015. | (Photo: Reuters/Kevin Lamarque) 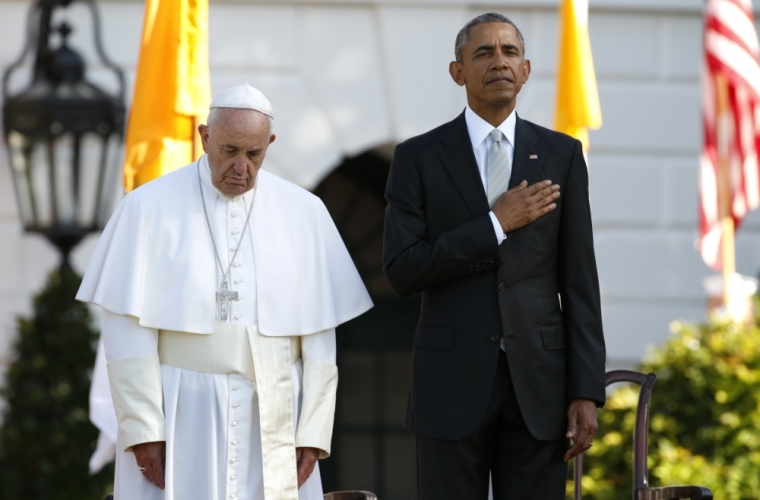 U.S. President Barack Obama (R) stands with Pope Francis during an arrival ceremony for the pontif at the White House in Washington September 23, 2015. The pontiff is on his first visit to the United States. | (Photo: Reuters/Kevin Lamarque)
View Photos

WASHINGTON — With over 11,000 ticketed guests gathered on the South Lawn, Pope Francis made his first-ever visit to the White House Wednesday morning, and called on the world to defend religious liberties and take better care of the environment before going to the Oval Office for a private meeting with President Barack Obama.

The leader of the Catholic Church was welcomed to the White House by the president and first lady Michelle Obama. After the playing of the Holy See's national anthem, the U.S. national anthem, and a short speech by Obama, the pope made his first direct address to the American people and challenged all Americans to be "vigilant" defenders of religious liberty.

"Mr. President, together with their fellow citizens, American Catholics are committed to building a society which is truly tolerant and inclusive, to safeguarding the rights of individuals and communities, and to rejecting every form of unjust discrimination," the pontiff asserted. "With countless other people of goodwill, they are likewise concerned that efforts to build a just and wisely ordered society respect their deepest concerns and the right to religious liberty."

"That freedom reminds one of America's most precious possessions," he continued. "And, as my brothers, the United States Bishops, have reminded us, all are called to be vigilant, precisely as good citizens, to preserve and defend that freedom from everything that would threaten or compromise it."

In the president's speech, Obama also discussed religious liberty and explained that Christians throughout the world are being killed for their faith, a fact which he was criticized for not mentioning after the beheadings of Coptic Christians by Islamic State militants in Libya.

"You remind us that people are only truly free when they can practice their faith freely," Obama told the pope. "Here in the United States, we cherish religious liberty. It was the basis for so much of what brought us together. And here in the United States, we cherish our religious liberty, but around the world, at this very moment, children of God, including Christians, are targeted and even killed because of their faith."

"Believers are prevented from gathering at their places of worship. The faithful are imprisoned, and churches are destroyed," the president continued. "So we stand with you in defense of religious freedom and interfaith dialogue, knowing that people everywhere must be able to live out their faith free from fear and free from intimidation."

After discussing the importance of religious liberty, Francis used a good portion of his speech to discuss the the political issue of climate change, and argued that the time has come for the world to address the issue. The pontiff commended Obama for introducing an initiative to reduce air pollution.