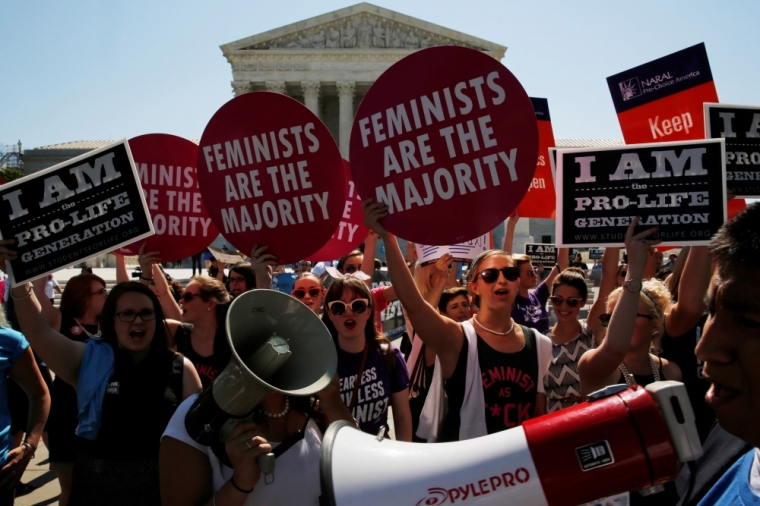 Pro-abortion protesters and pro-life activists jostle with their signs as they demonstrate in the hopes of a ruling in their favor on decisions at the Supreme Court building in Washington, U.S. June 20, 2016. | (Photo: Reuters/Jonathan Ernst) 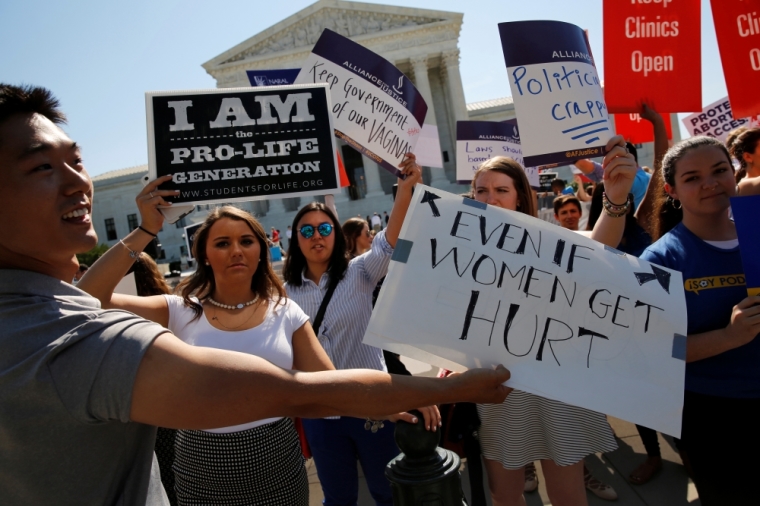 Pro-abortion protesters and pro-life advocates jostle with their signs as they demonstrate in the hopes of a ruling in their favor on decisions at the Supreme Court building in Washington, U.S. June 20, 2016. | (Photo: Reuters/Jonathan Ernst) 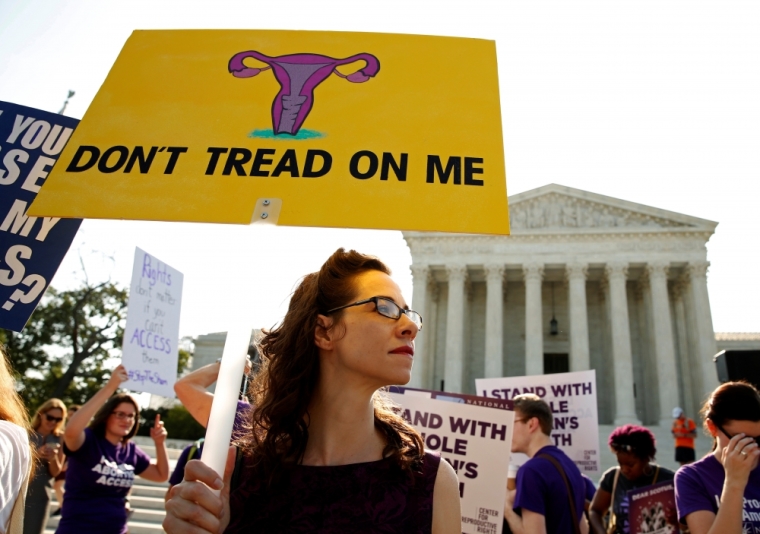 Demonstrators hold signs outside the U.S. Supreme Court as the court is due to issue its first major abortion ruling since 2007 against a backdrop of unremitting divisions among Americans on the issue and a decades-long decline in the rate at which women terminate pregnancies in Washington, U.S. June 27, 2016. | (Photo: Reuters/Kevin Lamarque) 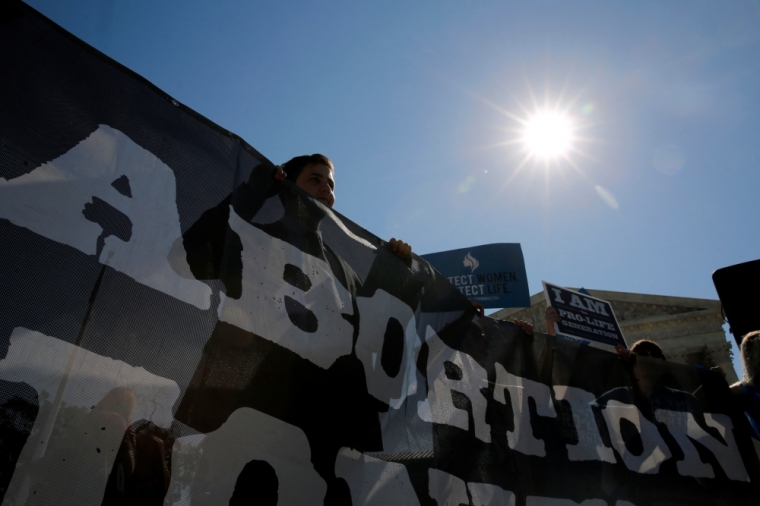 Anti-abortion protesters demonstrate in the hopes of a ruling in their favor on decisions at the Supreme Court building in Washington, U.S. June 20, 2016. | (Photo: Reuters/Jonathan Ernst) 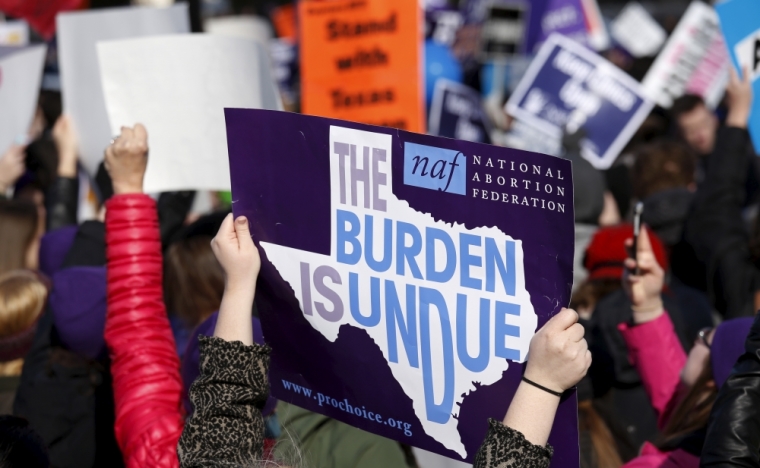 Pro-abortion protesters demonstrate in front of the U.S. Supreme Court as the court takes up a major abortion case in Washington, in this file photo taken March 2, 2016. | (Photo: Reuters/Kevin Lamarque)
View Photos

In a 5-3 decision, the highest court in the land concluded that the Texas' law's demand that abortion providers have hospital admitting privileges and that clinics be regulated as surgical centers violated the U.S. Constitution.

"We conclude that neither of these provisions offers medical benefits sufficient to justify the burdens upon access that each imposes," wrote Justice Breyer.

"Each places a substantial obstacle in the path of women seeking a previability abortion, each constitutes an undue burden on abortion access … and each violates the Federal Constitution."

In July 2013, then Republican Gov. Rick Perry signed into law House Bill 2, which among other things banned abortions after 20 weeks' gestation and required abortion clinics to the meet the same basic health and safety standards as outpatient surgical centers.

Soon after it became law, HB 2 endured a series of legal challenges as many clinics in the Lone Star State closed due to their inability to fulfill the safety requirements of the new law.

In June 2015 a three judge panel of the Fifth Circuit Court of Appeals upheld nearly all of HB 2, allowing only an injunction on behalf of Whole Women's Health.

"In plain terms, H.B. 2 and its provisions may be applied throughout Texas, except that Supreme Court precedent requires us to partially uphold the district court's injunction of the ASC requirement as applied to the Whole Woman's Health abortion facility in McAllen, Texas, and to uphold the district court's injunction of the admitting privileges requirement as applied to Dr. Lynn when he is working at the McAllen facility," read the panel's decision.

Throughout January and February, several amicus briefs were filed by groups and elected officials representing both sides of the overall abortion debate.

In February, groups including the National Right to Life Committee, the American Center for Law & Justice, Concerned Women for America, and Live Action filed briefs on behalf of HB 2.

Following oral arguments in March, some pro-life activists expressed concern that the law might be struck down, noting the inability to read crucial swing vote Justice Kennedy's opinions on the case.

Steven H. Aden, senior counsel with the Alliance Defending Freedom, told The Christian Post in an earlier interview that he believed Kennedy was good at hiding his opinions during arguments.

"Justice Kennedy has a judicial demeanor that precludes one from reading him," said Aden, who serves as director of Life Alliances for ADF.

"He's wise to the knowledge that people will take everything he says and his gestures and the looks on his face as a signaling one way or the other. So he does not disclose by verbal or nonverbal means his position."

Family Research Council Senior Fellow Cathy Ruse provided CP with comments in March regarding what she observed during the arguments, agreeing that Kennedy's views were uncertain.

"No one hearing arguments today could come away with a clear idea of how Justice Kennedy is likely to vote. Even when he is very vocal, Kennedy's comments and questions serve as poor predictors of his votes," said Ruse.

In his dissent, Justice Alito denounced the majority decision, saying that it "strikes down numerous provisions that could not plausibly impose an undue burden."

"For example, surgical center patients must 'be treated with respect, consideration, and dignity.' Tex. Admin. Code, tit. 25, §135.5(a). That's now enjoined. Patients may not be given misleading 'advertising regarding the competence and/or capabilities of the organization.' §135.5(g). Enjoined," wrote Alito.

"And each center 'shall develop, implement[,] and maintain an effective, ongoing, organizationwide, data driven patient safety program.' §135.27(b). Also enjoined. These are but a few of the innocuous requirements that the Court invalidates with nary a wave of the hand."