A former police officer-turned-psychologist has revealed his Bible-based insights on how war veterans struggling with post-traumatic stress disorder (PTSD) and other traumatic brain injuries (TBI) can find lasting hope and healing.

Dr. Timothy Barclay, Associate Professor of Psychology at Liberty University and a licensed clinical psychologist at Wyndhurst Counseling Center in Lynchburg, Va., explained that many veterans today are “falling through the gaps” when it comes to mental health care.

“There are a lot of veterans with PTSD who are struggling, but many don’t seek treatment for a variety of reasons,” he said. “Number one, they don’t know where to go, because the only system that they know of is the VA [hospital], and they don’t know any other sources where they can get treatment.”

“Secondly, they believe they don’t need treatment — they believe it’s something that will pass on its own given time, and that they can just willpower their way through it,” he continued. “Those common mistakes can be fatal.”

According to the U.S. Department of Veterans Affairs, more than 20 million U.S. military veterans are currently living in the U.S. After chronic exposure to life-threatening situations in a theater of war, many of them struggle with PTSD and various traumatic brain injuries. If left untreated, sufferers of such trauma can experience severe consequences — and sometimes death.

But nearly half of U.S. veterans who need mental health care don't get it, a recent study found. Veterans who seek help for PTSD and other issues are often discouraged by the VA’s short-staffed clinics and hospitals, long wait times, and minimal social support.

A former detective sergeant in the New Castle (Pennsylvania) Police Department, who also served in the U.S. Army, Barclay developed a passion for treating this underserved population while interacting with hundreds of individuals struggling with mental health issues. So, after earning his Ph.D. in Psychology and working for several years as a clinical psychologist, Barclay started a nonprofit organization — the Collateral Damage Project (CDP) — providing holistic, in-depth care to veterans experiencing symptoms of PTSD or TBI.

“We think that’s aptly named because our vets are collateral damage to the system; we’re losing so many per day just for not having proper care,” he said of CDP. “In my practice, we’ve always treated vets and offered various levels of pro bono services, but you’re only scratching the surface doing some free treatment here and there. You’re really not getting anywhere. What really needs to be done in treating those types of disorders is a very intense level of care.”

CDP is a 9-5 program offering psychotherapy, comprehensive treatment, and counseling to 8-10 veterans during eight 4-week cycles per year. Prior to treatment, all participants complete a full psychological, neurological, and behavioral evaluation to receive individualized care tailored to fit their personal needs.

“What makes our program unique and distinct from other organizations and treatment programs is its intense nature,” Barclay said. “We offer this level of care completely free; we’re even able to pay for the cost of transportation, lodging, meals, etc.”

The program is also faith-based — a critical element missing from most traditional mental health programs.

“The research states that’s one of the core components military members want in their treatments; they want a holistic view — not just treating the person, but the soul as well,” Barclay said. “What CDP seeks to do is provide the best treatments known in research, but also providing that spiritual aspect, too, so we can truly treat the individual from a holistic point of view. Not just treat them as a number, but treat them as a human being, as a creation of God.”

As part of the program, Barclay employs a research-based method giving veterans the tools to live better lives and realize their full potential. The four traits that create a state of well-being and resilience, according to his research, are hope, commitment, accountability, and passion.

“It’s the combination of those things that really give us the impact and the progress,” he said.

As a Christian, Barclay believes that these four traits embody the very nature of God: He provides hope through the sacrifice of His son; He embodies commitment through the laying down of His life; He demonstrates accountability through the unity of the Father, Son, and Holy Ghost; and displays harmonious passion in His relationship with His son.

“I find that the biblical aspects of hope, commitment, accountability, and passion match up with what is out there in the empirical literature,” he said. “So, I validated that model and have shown it to be empirically valid, assessing it with clinical populations and non-clinical populations, working with active duty and retired special operations military personnel. We use that model as part of our counseling with Collateral Damage Project.”

“The abundance of those traits allows us to live at a higher capacity,” he added. “That’s exactly how God calls us to live.”

One issue in the VA system that CDP seeks to address, Barclay said, is the minimal support for veterans struggling to transition from military to civilian life.

“There’s a lack of that type of care, and I believe it comes from the way the military approaches it,” Barclay said. “There’s no training that takes place for them to mentally make that transition [to civilian life]; this fuels that gap and makes it exceptionally difficult for soldiers to cope in an environment where that hyper-vigilance is no longer needed So, they basically just end up wallowing in that frustration without getting that proper care, and unfortunately, it’s leading to a lot of suicide.”

As an associate professor of psychology at Liberty University, Barclay draws upon his research in behavioral science and real-life experience when teaching his students how to minister to those suffering from trauma. He’s also written a textbook based on his research, which he uses in teaching a Theories class.

“I’m always directed toward 2 Peter 1:5, where Peter talks about adding to your faith goodness, knowledge, self-control, perseverance, mutual affection, love, and if we possess these things in abundance, they will keep us from being ineffective,” he said. “If we possess those things in abundance — goodness, knowledge, self-control, perseverance, love — they will keep us from living ineffective lives, and that will give us the ability to touch other lives and to make an impact on people for the cause of Christ.”

A PTSD or TBI diagnosis can be devastating, crushing the resilience of the sufferer and tearing families apart. But Barclay maintains that it doesn’t have to be a death sentence. By treating both the mind and soul, he believes it is possible to heal from mental trauma — and wants to impart hope to those who are suffering.

“A lot of people have this conception that PTSD is a chronic condition — that’s there’s no cure for it, they just have to live with it, and the common method of treatment is medication,” he said. “That’s just not true. With the proper treatment, PTSD is curable and because of the level of care that we’re able to provide, we’re able to remove many, if not all of those medications that [veterans] are on.”

He added, “Our tagline for CDP is, ‘restoring what war has taken.’ That’s actually our mission. What we’re able to do with the level of intervention is to restore that individual to their level of functioning before they were exposed to trauma.” 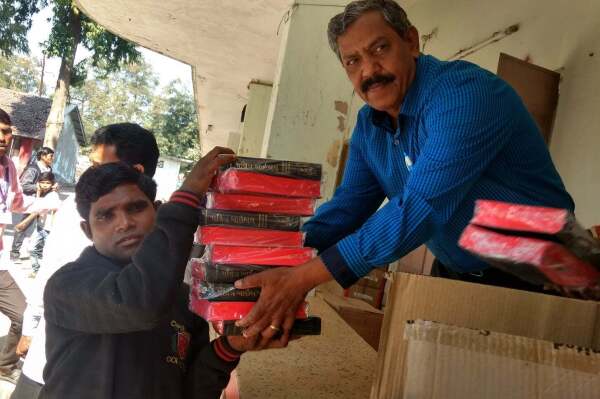