BROOKLYN, New York — It was just a quarter after 7 on a rainy Friday morning in May when I met Bill Wilson, founder of the largest children’s ministry in the world, at the headquarters of Metro World Child. He was dressed in a three-piece suit and seated at the communal housing lunchroom for breakfast before heading to his weekly leaders' meeting, where leaders from all over the world tune in to get a rundown of all that’s going on in the ministry.

I was asked to join Pastor Bill for breakfast. I greeted him with “Good morning, how are you?” To which the minister, a force of nature all on his own, responded: “It’s Friday!” I took it to mean TGIF, one day closer to Saturday, Wilson’s favorite day of the week.

Every Saturday for the last 50 years, Wilson has jumped on a yellow school bus and picked up inner city kids to take them to church.

“There’s a difference between happiness and joy," he said of what brings him the most pleasure in life. "I’m not an overly happy person but I have joy. Driving the bus brings me joy because you get to watch them walk out of where they live and get on the bus [and] see how they respond at Sunday School. To me, that’s a joyful thing because you know it’s because you’ve been obedient for a long time."

This reporter was influenced by Wilson’s ministry as a child and since I was spending the morning with him and attending his staff meeting, he requested I sing a song and share some of my testimony with his team members who were present and would be tuning in from across the world. As we sat and ate breakfast together, I watched him as he made sure everything was on schedule and his team had everything necessary to execute his vision for the morning's meeting.

At the table, we were joined by donors and workers in the ministry. Although Wilson briefly reminisced about our chance encounter over 25 years ago, he limited his words and was noticeably preparing himself for the task at hand. After eating a plate of eggs, bacon and a biscuit he got up and headed toward the meeting space. He walked with a certain authority as he greeted workers with hugs and handshakes as he passed by them. All noticeably revered their fearless leader.

As the meeting kicked off with worship Wilson stood at the back of the room. He said it was his way of discerning the atmosphere of worship among his team.

“It’s never been about anybody’s ability, it’s been about their availability. I think the availability is what separates the liars from the buyers,” Wilson later said to me, explaining his definition of authentic ministry.

After worship, he arose, walked over to his pulpit and instructed that the lighting in the room be turned up because he doesn't like the “dark” club feel that most modern churches today go for in ministry. He then proceeded to talk to Metro’s leaders, whom he now considers to be his family.

“I had one sister and one brother and they’re both gone. I’ve pretty much been on my own for all these years. But the people I feel the closest to would be the people I serve with here,” Wilson said of whom he believes his family to be after being abandoned by his mother as a child.

At age 12, Wilson was left on the side of the road in Saint Petersburg, Florida. He had no idea at the time that his mother wouldn’t come back for him so he stayed there. Alone and hungry, he waited for three days before someone passing by finally stopped to see if he was OK. The man who pulled his car over gave Wilson a warm plate of food and then put him on a bus that was headed to a Christian camp. As Wilson recalled, no one at the camp would pray over him, possibly because of how malnourished he appeared, but it was there where he realized Jesus was the one who would never leave him.

Wilson always shares bits of his testimony when preaching and as he spoke to his staff and leaders at Metro that morning, encouraging them to “toughen" up and be bold in their faith, he once again used his life as an example. His passionate preaching was delivered after the staff gave praise reports about all they did that week and his sermon was meant to help them open their spiritual eyes and realize the impact they are making in the lives of thousands.

During our one-on-one time, Wilson revealed that he saw his mother again about 20 years after she abandoned him on the streets of Florida. He hired an agency to track her down and discovered that she was still living in the same city where she left him.

“Her brain was so deteriorated from the alcoholism for so many years,” Wilson described. “I came up to her and said, ‘I’m your son.’ She said, ‘I have no son.’”

Unfortunately, the ministry leader didn't have photos from his childhood to show his mother so he had nothing but words to offer her. But she refused to accept him.

Six weeks after his heartbreaking reunion with his mother, she was found dead on the street and that chapter of his life was officially closed.

“It would be very easy for someone who comes from my background and seen what I’ve seen from the time I was a child to be this hateful, bitter, angry old man. I had to realize that my mother made choices and I was the recipient of someone who made bad choices. Most of us are waiting for someone to come to us to say they’re sorry,” he said.

“So you’re telling me you’re waiting for someone you have no control over to tell you they’re sorry before you can move on with your life? I don’t think so. He who the Son sets free is free indeed. And I couldn’t wait and I didn’t wait.

"I’ve chosen not to wait for my mother to come to me. I had to make the decision and be the bigger person and come to her and tell her I forgive her. That was on me. The Bible's very clear, those of you that are more spiritual should take the higher road. I had to do that with her.”

Despite all he endured as a child, Wilson went on to found Metro World Child in Brooklyn in 1980. Fifty years later, the pastor’s unique concepts of outreach and exciting Sunday school programs, as well as training courses and curriculum development, are now used globally.

What started in a small building in the ghetto of Brooklyn has now grown into an international ministry that reaches over 200,000 children weekly. Metro World Child has Sunday schools around the world, including: New York City, Kenya, the Philippines, Peru, South Africa, India, Colombia and Haiti.

Wilson’s heart of compassion for suffering children everywhere came because of the pain he experienced as a young child. He first began sharing the hope of Jesus as a teenager in Florida where he drove a van to take needy children to Sunday school. That concept would go on to become Wilson’s popular bus ministry, which is now practiced at the ministry's many locations worldwide. 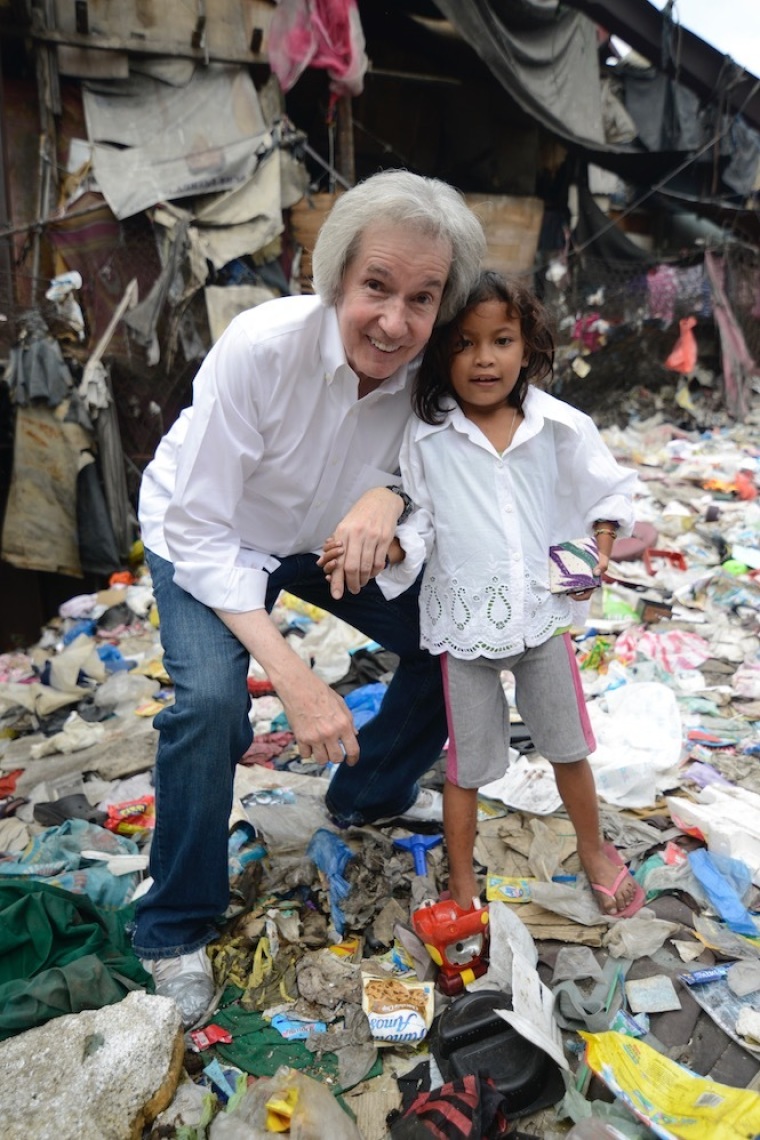 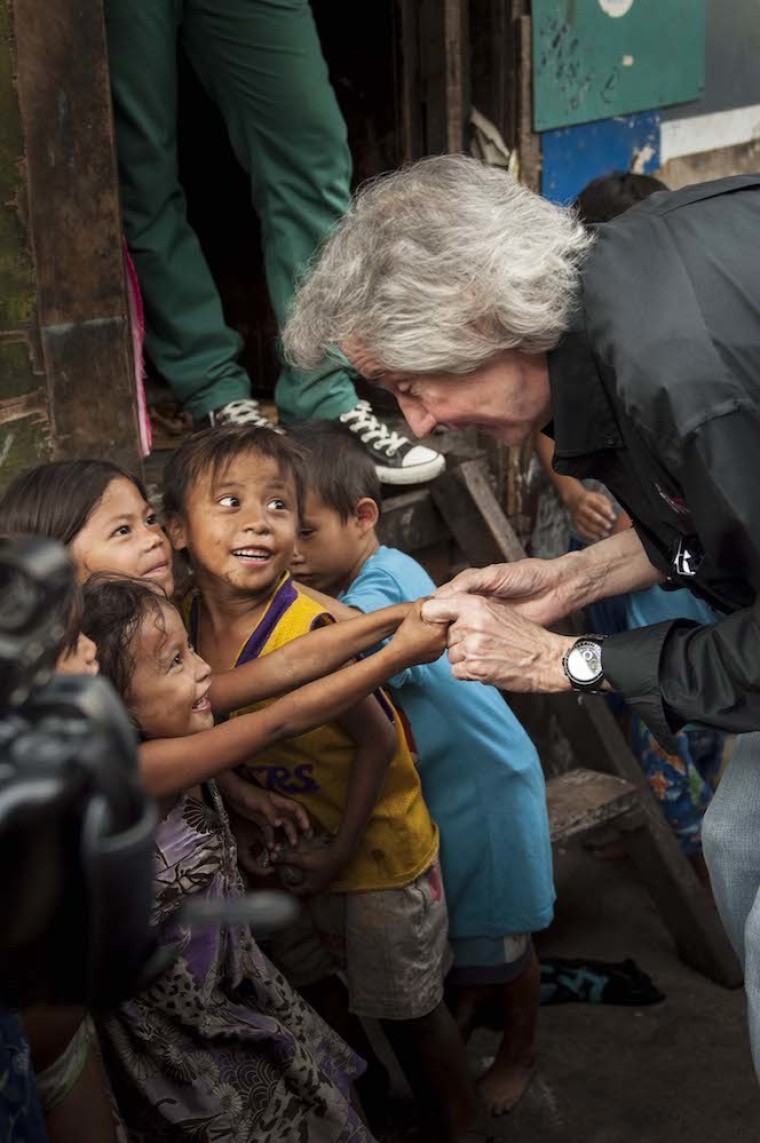 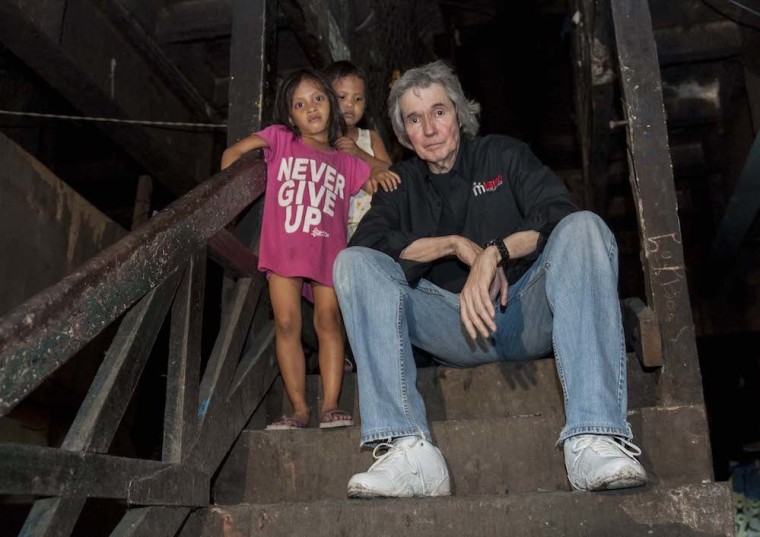 As I watched Wilson talk to leaders at the staff meeting, I couldn’t help but notice his man-made dimple, a scar that remains on the side of his face after he was shot while ministering in one of New York City's most dangerous areas in Brooklyn on March 5, 2003. And that wasn't the only time he was wounded, either. On another occasion he was stabbed, and while doing missionary work near the Syrian border he was shot in the back. Fortunately, the bullet was stopped by a bulletproof vest but the wound resulted in broken ribs and a head injury.

"One of the things I’ve always told people — whether it’s the staff or even on television — is that your commitment has to be stronger than your emotions,” Wilson said, explaining why he keeps going despite all he’s been through. “People put it on T-shirts and quote me on it; they think it’s a nice, cute little saying. But people lose the profundity of the statement in the simplicity of it. Because most people live their lives on emotions.”

“If I didn’t do anything every time I didn’t feel like doing anything I wouldn’t do much. But the commitment side of it is what carries you way beyond the emotions. And if people can grasp that and make it applicable in their lives, that will carry them past the horrific things that life will just throw at you, not just me,” he continued.

“I’ve seen 23 people murdered, saw a little girl get her head chopped off. … But everything that has happened to me in these past 50 years of ministry was designed to get me to quit. And if you quit, the enemy wins, the game’s over and you become no more than a statistic.”

Despite it all, he’s managed to keep his focus on the mission.

I asked if he'd ever sought counseling to help him through some of these traumatic experiences but he said he never had.

“I’ve had people describe me in psychological terms, which maybe that meant that I should have had counseling. I’ve had one psychiatrist, we were in a casual conversation and he said, ‘Technically, with everything you’ve seen, the life experiences, the tragedies, by living where you’ve lived and traveled where you’ve traveled, technically you shouldn’t be able to put two sentences together and make it coherent. It’s only by the grace of God.’ And I understand that, I know that very well,” Wilson admitted.

He's continued to expose himself to the needs of the world and although it “breaks his heart” it’s what motivates him and gives him the fuel to forge ahead.

“I’ve forced myself to travel and see the need. Because when you see the need, you get close enough to the urgency. It breaks your heart but it also demands a response. It demands something from you. It angers you, it frustrates you, but it drives you to make a difference,” he confessed. “I do it on purpose because I’m preaching and speaking so much. If that’s your world, if that’s all you see, then you get sucked in and cut off from the real world.”

After the meeting, we headed to lunch upstairs in a conference room with some of Wilson’s colleagues and an Asian pastor who works in Chinatown and has replicated Metro World Child in areas of the world where Christianity is heavily persecuted. While eating some New York style Spanish food, Wilson listened to a pitch to take the children’s ministry into a new region of the world.