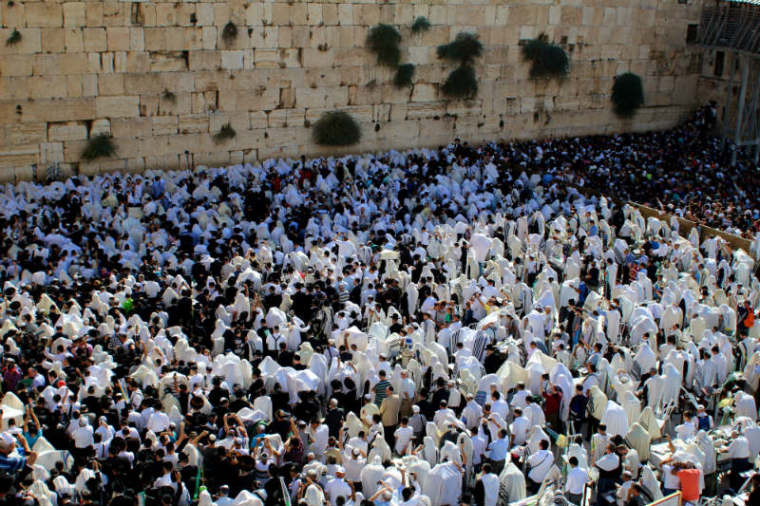 This photo shows pilgrims at the Wailing Wall in Jerusalem. | (Photo: PBS/Bosie Vincent) 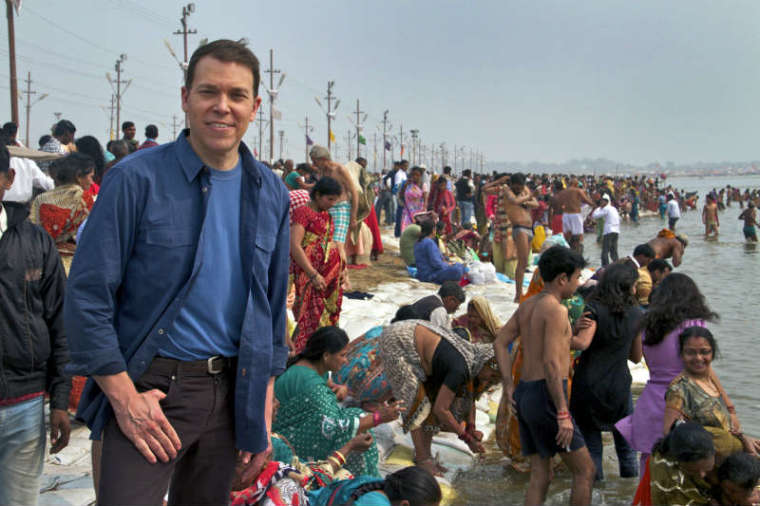 An estimated 300 to 330 million "spiritual tourists" visit significant religious sites every year, such as the Jesus Trail or the Wailing Wall in Israel. Why do they do it, and what are they searching for? Bruce Feiler, author of the bestsellers Walking the Bible: A Journey by Land Through the Five Books of Moses and Abraham: A Journey to the Heart of Three Faiths, embarked on several spiritual journeys with seekers of various faiths to find out.

In a new series titled "Sacred Journeys With Bruce Feiler" and premiering on PBS Tuesday, Dec. 16, Feiler accompanies pilgrims from the U.S. in their spiritual quests to sacred sites in France, Japan, Saudi Arabia, Jerusalem, India, and Nigeria. The six-part series kicks off with Feiler's journey with a group of solders that includes Wounded Warriors, soldiers injured during their service in Iraq and Afghanistan, to the believed healing waters of a Roman Catholic shrine in Lourdes, France.

Feiler also spends time with Brian Kwan, a Colorado man who had a crisis of faith after losing his Christian father. Why did Kwan, who converted from Buddhism to Christianity as a teen, choose to embark on the 40-mile, four-day journey known as the Jesus Trail?

As Kwan told Feiler, "I struggled deeply with my faith, and while I never left the church, I was slipping quickly. But every time I would return to coming to Him as I was and placing my faith wholeheartedly in Jesus again, the best way that I can put it is that I felt like I was returning home. Still, I felt that if I was going to continue my relationship with Christ, I felt the need to learn more about the region that Jesus spent time in."

Watch a preview of "Sacred Journeys With Bruce Feiler" that shows the host's time in Jerusalem in the video player below.

Below is a transcript of The Christian Post's interview with Feiler, who shares what he learned from journeying with these various seekers, his assessment of the future of faith, and why he is so fascinated with the subject with religion.

CP: What was your motivation for the project? Where did you get the idea?

Feiler: As you know, I've spent 20 years going on religious journeys of this kind. I wrote the book Walking the Bible, which came out in 2001, then a series of books in the space (since) Walking the Bible, (such as) Abraham (and) Where God Was Born. And I made a show for PBS after Walking the Bible came out called "Walking the Bible." It was very successful on PBS. After that, PBS came to me and asked if I would do a show on pilgrimage and I didn't want to do a show that was a series of Wikipedia entries. Pilgrimages are strange journeys that strange people do in strange places. But what do you hear so much in religious circles these days: 'Oh, I'm not religious but I'm spiritual.' So we know that everybody is on a journey of some kind. So what I wanted to do is make a series so that whatever journey you're on, it was reflected on the screen and it could really change you. So that was really the motivation.

CP: How did you choose which countries to visit?

Feiler: So it turned out that while organized religion is really threatened today, attendance and membership are dropping, pilgrimage is surging. A U.N. report from this fall said that 330 million people a year go on a pilgrimage, that's a million people a day. So we spent a year trying to figure out which pilgrimages we wanted to cover to come up with the six that we were putting on the air. And so we ended up with... I went bathing with the 100 million people in the Ganges, a 700-mile Buddhist track in Japan, we went with 40 Wounded Warriors from Iraq and Afghanistan to bathe in the holy waters of Lourdes in France, the Catholic shrine, and then there's an hour where I walked on the Jesus Trail in Israel.

CP: What were some key things you took away from the experience?

Feiler: I think the key to us was finding the pilgrims, that you were experiencing it through their eyes. And I think that what I found was that people tend to do these journeys in moments of transition in their lives. They just graduated from school and they're starting a new chapter in their life. We follow a young couple on the Jesus Trail that just got married (and) they're about to have children and they're reflecting on what their life will be like. People who lost a job, or getting divorce, or retired.

I mean there's a great story in one of the signature stories of the whole series, is we travel with this young man from Colorado on the Jesus Trail. The Jesus Trail is a 40-mile, 4-day track from Nazareth to the Sea of Galilee and people very much do this to sort of walk in the footsteps of Jesus and try to understand what that would be like. This man, Brian Kwan, he was born Buddhist but converted to Christianity when he was 16. And then suddenly in his twenties his father died and he goes through a period where he questions his faith: 'How can I love a God who takes my father away from me without even saying goodbye?' (He) decides to go walk in the footsteps of Jesus. He goes with only the clothes on his back and a Polaroid camera, because he's a cameraman. During these four days he kind of works this out. He gets to the point at the end where he gets baptized in the River Jordan. And it's this kind of change ... You go on a journey like this, you're going to be changed in one way or the other. You may not always anticipate how it's gonna be, but the experience is so powerful, I think even the viewers will be changed to.

CP: Are there any stand-out similarities or differences with the various faiths you explored?

Feiler: Research in this country shows that religion is very fluid these days so half of all Americans will change faith in the course of their lives, four in 10 Americans are in an interfaith marriage. So in the old days, when I was growing up where you kind of were ghettoized and surrounded only by people in your own faith or tradition, we're not in that time anymore. The dominant way we encounter the world is through the Google box. We search for what to buy and search for what to think, search for news, search for entertainment, and increasingly, search for religion. The number one thing that's most similar among the different pilgrims on these different journeys in these different faiths is they're all searching. It's that they no longer want to just passively accept the religion, they want to be active in deciding what they believe. That's the big change. For me, I'm the father of soon-to-be 10-year-old twin daughters, and it empowers me to say, 'Look, here's what I believe. You don't have to agree with me. You can decide for yourself.' It's harder, but ultimately it can be more fulfilling.

CP: What is your assessment on the future of faith?

CP: What is it that fascinates you about religion?

Feiler: You and I could walk outside and walk down the street and ask every single person we meet, 'Tell me what's going on your life. Tell me, tell me something you're struggling with. Tell me something you're excited about.' And that relates in some way to the search for meaning, to the idea of connecting with other people, to the idea of what's your purpose for being here, to the idea of what's your goal in your life, to the idea of how do you want to be as a person and as a member of a family and a community. Religion has a tremendous amount to say to that, and you can see it from three hundred million different angles. So to me, it really is this search for meaning that I've personally been interested in, and doing it through this prism is a very effective way to get to the question of who do I want to be, what do I want to teach my children, and how do I want to be as a family member, as a community member, as a sort of person alive today. This is a great way to ask this question. And it's really ultimately what the people going on these pilgrimages are asking and what you can see in this series.

In addition to authoring several bestsellers, Feiler also writes the "This Life" column for the Sunday The New York Times. Learn more about "Sacred Journeys With Bruce Feiler" at PBS.