Can we remain neutral toward Jesus?

In a recent conversation with a younger co-worker, he expressed to me that many in his generation are experiencing real frustration with the news media, along with feelings of uncertainty and a lack of hope for the future. How can we know which news is true, and where or in whom can we place our trust? Where can I find lasting peace in these times of true uncertainty and suffering in the world?

Whether we are aware of it or not, our worldview is constantly being shaped and formed by what we hear, read, and choose to believe. Our worldview informs our personal, social, and political lives. It helps us understand our purpose. Our worldview determines our ethics, our values, and our capacity for happiness. It helps us answer the big questions of life: How did I get here? How am I to live? Where do I find meaning in life? What is my ultimate destiny?

CP Reporter Brandon Showalter recently wrote that “a new survey shows that the majority of Americans no longer believe that Jesus is the path to salvation and instead believe that being a good person is sufficient.”

Showalter went on to say that “...the latest findings — exploring perceptions of sin and salvation — from George Barna… show that nearly two-thirds of Americans believe that having some kind of faith is more important than the particular faith with which someone aligns.”

Yet faith without a foundation is blind faith. It is blind speculation.

I sometimes wonder how well we know ourselves, particularly the deep thoughts and intentions of the heart. I do not think we realize how feelings, desires, and emotions have such a great influence over the decisions and choices we make. They often cause us to bypass our logic and reason, and lead us away from what is true. What I have concluded is that although our emotions and feelings may be real, they are unreliable.

One of the most wonderful examples that captures the essence of this human struggle to find Christ can be found in the life of Sheldon Vanauken. In his wonderful book A Severe Mercy, Vanauken details his long spiritual journey. He first describes himself as an agnostic, but then later admits he was actually an easygoing theist who regarded Christianity as a sort of fairy tale.

Sheldon Vanauken lived in different places in the world, yet he somehow struck up a long-distance friendship with C.S. Lewis. Much of the book is an exchange of letters between the two of them. In his letters, Vanauken would ask the spiritual questions that troubled him most, and Lewis would patiently and intelligently respond.

Vanauken describes the spiritual breakthrough that brought him to faith. Please take note of his thought process and how honest he is with himself:

“Christianity—in a word, the divinity of Jesus—seemed probable to me. But there is a gap between the probable and proved. How was I to cross it? If I were to stake my whole life on the Risen Christ, I wanted proof. I wanted certainty. I wanted to see him eat a bit of fish. I wanted letters of fire across the sky. I got none of these. And I continued to hang about on the edge of the gap.”

At this point, he realized that he was in kind of a spiritual limbo. He described it in these words:

“The position was not, as I had been comfortably thinking all these months, merely a question of whether I was to accept the Messiah or not. It was a question of whether I was to accept Him—or reject. My God! There was a gap behind me, too. Perhaps the leap to acceptance was a horrifying gamble—but what of the leap to rejection? There might be no certainty that Christ was God—but, by God, there was no certainty that He was not. If I were to accept, I might, and probably would, face the thought through the years: ‘Perhaps, after all, it’s a lie; I’ve been had!’ But, if I were to reject, I would certainly face the haunting, terrible thought: ‘Perhaps it’s true—and I have rejected my God!’ This was not to be borne. I could not reject Jesus. There was only one thing to do, once I had seen the gap behind me. I turned away from it and flung myself over the gap toward Jesus.”

A few days later, he wrote these words to C.S. Lewis:

“I choose to believe in the Father, Son, and Holy Ghost—in Christ, my Lord and my God. Christianity has the ring, the feel of unique truth. Of essential truth. By it, life is made full instead of empty, meaningful instead of meaningless. Cosmos becomes beautiful at the Centre, instead of chillingly ugly beneath the lovely pathos of spring. But the emptiness, the meaninglessness, and the ugliness can only be seen, I think, when one has glimpsed the fullness, the meaning, and the beauty. It is when heaven and hell have both been glimpsed that going back is impossible. But to go on seemed impossible, also. A glimpse is not a vision. A choice was necessary: and there is no certainty. One can only choose a side. So I—I now choose my side.”

The words of Vanauken that seem to be so pivotal are “A choice is necessary.” He is correct. A choice has to be made.

I learned the truth of this because you cannot remain neutral toward Jesus. To not make a decision, in the end, is to make the decision not to accept Him. At a certain point in Jesus’ ministry, He confronted His own disciples with the necessity of a choice. In the sixth chapter of John (vs. 66-69), many of His followers began to withdraw from Him and chose to no longer follow Him. They did not like what He was teaching. He is standing there, with only the twelve disciples remaining. He asks them, “Do you not want to leave too and go with them?” Peter responds and says:

“Lord, to whom shall we go? You have words of eternal life. We have believed and have come to know that You are the Holy One of God.”

What a powerful response by Peter. If we do not put our faith in You, Jesus, who will we look to for eternal life?

Who will we put our hope and faith in? This is the question we are all confronted with. It is the choice we have to make. If I do not look to Christ for eternal life, to whom shall I look? Who will I rely upon? Remember, faith must have a foundation, and if Jesus is not that foundation, who or what will be?

Get your copy of Richard’s newest book Reflections on the Existence of God on Amazon or at existenceofgodbook.com 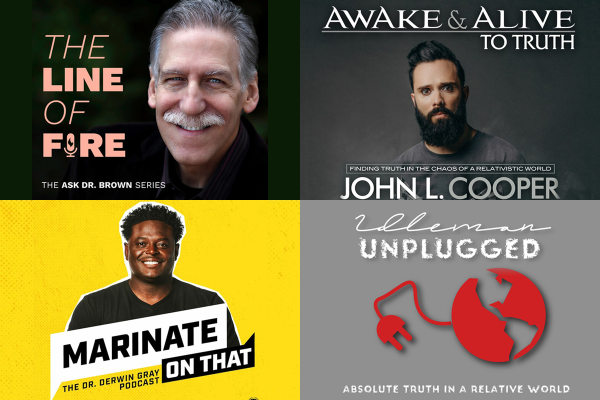 Are you looking for amazing podcasts this holiday season — shows that give you joy and hope and get you thinking about ...