Everyone has a certain perspective on how life works. It is the lens through which we see life. It is what most people call a worldview. When we are born, we begin to try and understand how life works. Over time, we formulate a philosophy of life - a worldview. This worldview influences how we see ourselves, how we relate to others, and how we live our lives.

“The best atheists agree with the best defenders of faith [in God] on one crucial point: that the choice to believe or disbelieve is existentially the most important choice of all. It shapes one’s whole understanding of human life and purpose, because it is a choice that each must make for him or herself.”

If we are seeking to discover what is true about God, we must remember that truth is discovered and not invented. It is discovered by examining the available evidence that enables us to come to a rational conclusion. If something is supported by evidence, it is worth believing.

William Kingdon Clifford was a philosopher who lived in England more than 150 years ago. He was not very well known because his life was cut short at age 33. His recently discovered essay entitled “The Ethics of Belief” is receiving a great deal of attention.

In this essay, written in 1877, Clifford says that it is our moral obligation to believe responsibly. We must base our beliefs on sufficient evidence that we have diligently investigated. He believed this to be of such great importance because beliefs influence one’s actions. They are foundational to life.

In commenting on this essay, journalist Francisco Mejia Uribe contends that Clifford is on to something because when we believe something, the stakes are high. Every single belief has the capacity to be truly consequential, particularly if the belief is in error and involves the most significant issues of life.

This insight has caused me to wonder how many people examine the evidence on the existence of God before they come to belief. How many of them believe responsibly? I often think people make their decisions about spiritual reality based on subjective preferences. It reminds me of Pascal’s observation that most people invariably arrive at their beliefs not on the basis of proof (evidence) but on the basis of what they find to be attractive to them. It is quite clear, however, that truth is not a matter of subjective taste but that which is based on objective evidence.

I might add that this tendency of not believing responsibly is true of atheists and Christians. In both cases, they cannot give a good explanation of the position they have taken; they cannot explain the evidence that has led them to belief.

I am reminded of Sir Hector Hetherington, who, for 25 years, was the Principal (President) of the prestigious University of Glasgow in Scotland. In Samuel Leith’s book The Impossibility of Agnosticism, Hetherington had this to say about our search for spiritual truth:

“There are issues on which it is impossible to be neutral. These issues strike right down to the roots of man’s existence. And while it is right that we should examine the evidence, and make sure that we have all the evidence, it is equally right that we ourselves should be accessible to the evidence. We cannot live a full life without knowing exactly where we stand regarding these fundamental issues of life and destiny.”

Do we not care about what is true? Are we afraid to look reality in the eye because it may take us in a direction we don’t want to go? I believe this is one of the great flaws in our human character. We stubbornly hold on to our beliefs because they generally reflect how we want life to be rather than how life actually is. For this reason, evidence does not seem to matter.

A great example of this is Dr. Francis Collins. Many consider Dr. Collins to be one of the most effective and ground-breaking scientists in the world. Collins graduated with a degree in chemistry from the University of Virginia. He earned his PhD in chemistry at Yale and then decided, for good measure, he would go to medical school at the University of North Carolina. From there, he returned to Yale and later, the University of Michigan. He is most noted for having been chosen to chair the Human Genome Project where, in 2003, he led an international collaboration of two thousand scientists in sequencing the human genome. More recently, he was appointed by President Obama to be the Director of the National Institutes of Health. Clearly, he is a prominent scientist, but what is perhaps even more interesting is his spiritual journey.

He began this journey as an atheist. In his third year of medical school, while he was working in the hospital, he was attending a woman who had exhausted her options for treatment. She suffered from a heart condition and was going to die soon. Collins was moved by this kind and faithful woman. She had a strong faith, and she shared it with him. She said, “You know, I’m ready to go. Don’t worry about me.”

And then she said, “Dr. Collins, you’ve been so kind to listen to me and care for me and listen to me share with you about my faith. Tell me about your faith. Tell me what you believe.” Collins later wrote in this collaboration of writings by leading thinkers:

“Nobody had ever asked me that question before, not like that, not in such a simple, sincere way. I realized I didn’t know the answer. I felt uneasy. I could feel my face flushing. I wanted to get out of there. The ice was cracking under my feet. All of a sudden, by this simple question, everything was a muddle.”

Collins began to wonder if he was an atheist because he had chosen the position of reason or because it was the answer he wanted. Finally, it came to him. Collins shares in this collection of stories:

“As a scientist, I had always insisted on collecting rigorous data before drawing a conclusion. And yet, in matters of faith, I had never collected any data at all. I didn’t know what I had rejected. So, I decided that I should be a little better grounded in my atheism. I better find out what this is all about. So, I challenged a patient of mine who was a Methodist minister. And, after listening to my questions and realizing that I was not dealing with a very full deck of information, he suggested that I read the Gospel of John, which I did…I found the scripture to be interesting, puzzling, and not at all what I had thought faith was about… then I began to read C.S. Lewis and realized there was a great depth of thinking and reasoning that could be applied to the question of God.”

Lewis convinced him that reason and faith go hand in hand, though faith has the added component of revelation—the Bible. Collins had previously believed that Jesus and the stories of the Bible were nothing more than mere myths. Again, as he studied the historical evidence, he was stunned at how well documented and how historically accurate the Bible is. He also saw a surprising fidelity of the transmission of the manuscripts that were passed down over the centuries. And, over time, Francis Collins, based on the accumulation of the evidence that he observed, concluded that God exists, and that Jesus is the Son of God. He also concluded that most of the religious skeptics that he knew and that he meets today are just like he was. That is to say, they didn’t want to think about these things and never looked at any evidence, never drawing conclusions from the real evidence that was available.

This is what Dr. Dallas Willard, former professor of philosophy at the University of Southern California, believed was a major problem with individuals who considered themselves to be agnostic or atheist. Willard found that so many of the students and scholars he encountered on campus and in the world were guilty of what he called “irresponsible disbelief.” These bright men and women would often choose to disbelieve in something without any significant commitment to an investigation of that disbelief by way of sound reasoning and careful examination of the evidence.

Over 40 years ago, I read the wonderful book A Severe Mercy, by Sheldon Vanauken. The book details his long spiritual journey as an agnostic. Though Vanauken lived in different places in the world, he somehow struck up a long-distance friendship with C.S. Lewis. Much of the book is an exchange of letters between the two of them. Vanauken was seeking to get answers to the spiritual questions that troubled him the most.

Lewis’ answers provided the evidence that he needed to finally make a personal decision.

After coming to the conclusion that God exists and that Jesus was the Son of God, Vanauken was able to look back on his life and realize that he had contempt towards Christianity, but it was a contempt against something he realized he knew nothing about. He realized, like Francis Collins, that most of the people who reject Christianity know almost nothing of what they are rejecting.

This article is from Richard’s best-selling book Reflections on the Existence of God. a series of short essays that reveals the powerful evidence for God’s existence.

Get your copy today on Amazon or at reflectionsontheexistenceofgod.com. Preview Chapter 1 for free here!

Richard E. Simmons III is a Christian author, speaker, and the Executive Director of The
Center for Executive Leadership, a non-profit, faith-based ministry in Birmingham, Alabama.
His best-selling titles include The True Measure of a Man, The Power of a Humble Life,
Wisdom: Life's Great Treasure, and his newest book, Reflections on the Existence of God.
Follow Richard on Facebook, Instagram, and LinkedIn @thecenterbham. Tune in to
Richard's Reliable Truth Podcast on your favorite podcast app. 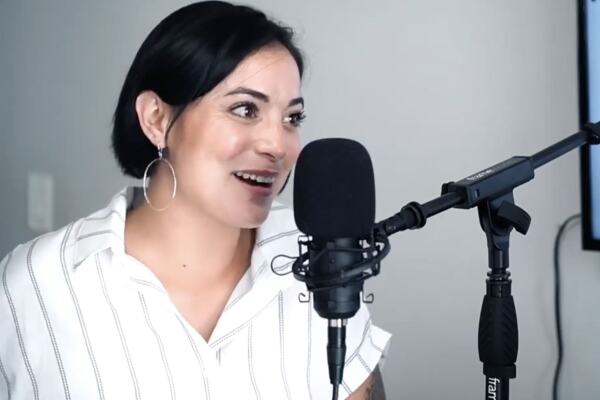 Alia has a story that will move you to tears as she explains her painful experiences. But her journey will also inspire ...