As the year 2020 comes to a close, most people are ready for this year to end and hoping the new year will bring less pain and suffering. But will that be the case?

Modern people seem to struggle with the issue of pain and suffering more than anyone else in history. For those of us in the Western world, we live in such prosperity yet struggle much more with affliction than people in other parts of the world. Author Philip Yancey says in his book Where is God When It Hurts:

“Books on the problem of pain divide neatly into two groupings. The older ones, by people like Aquinas, Bunyan, Donne, Luther, Calvin, and Augustine, ungrudgingly accept pain and suffering as God’s usual agents. These authors do not question God’s actions. They merely try to ‘justify the ways of God to man.’ The authors wrote with confidence, as if the sheer force of their reasoning could calm emotional responses to suffering.

Modern books on pain make a sharp contrast. Their authors assume that the amount of evil and suffering in the world cannot be matched with the traditional view of a good and loving God. God is thus bumped from a ‘friend of the court’ position to the box reserved for the defendant. ‘How can you possibly justify yourself, God?’ these angry moderns seem to say. Many of them adjust their notion of God, either by redefining His love or by questioning His power to control evil.

When you read the two categories of books side by side, the change in tone is quite striking. It’s as if we in modern times think we have a corner on the suffering market. Do we forget that Luther and Calvin lived in a world without ether and penicillin, when life expectancy averaged thirty years, and that Bunyan and Donne wrote their greatest works, respectively, in a jail and a plague quarantine room? Ironically, the modern authors—who live in princely comfort, toil in climate-controlled offices, and hoard elixirs in their medicine cabinets—are the ones smoldering with rage.”

Author Tim Keller encounters many religious skeptics in Manhattan where he works, and so many of them are skeptics because of the pain and suffering they see in life. How could a good God, a just God, a loving God allow such misery, pain, and anguish to exist?

However, Keller points out on the flip side that he has seen many people find God and transformation in the midst of pain and suffering. Adversity moves them toward God instead of away from Him. He says troubled times awakens people out of the belief that they are sufficient without God. This often leads people into a serious search of the divine.

C.S. Lewis seemed to have a good grasp on this. In his book The Problem of Pain, he says:

“Pain insists upon being attended to. God whispers to us in our pleasure…but shouts in our pain; it is His megaphone to rouse a deaf world.”

He goes on to say:

“No doubt pain as God’s megaphone is a terrible instrument; it may lead to final unrepented rebellion. But it gives the only opportunity the bad man can have for amendment. It removes the veil; it plants the flag of truth within the fortress of a rebel soul.”

Political commentator Dinesh D’Souza speaks of Bart Ehrman, an author, scripture scholar, and former Christian who abandoned his faith because of unspeakable suffering he saw out in the world. He said, “I could no longer reconcile the claims of faith with the facts of life.” What is interesting is that Ehrman acknowledges that he personally has never experienced any real suffering in his own life. What troubles him most is the suffering of people in Asia, Africa, and South America. Yet, ironically this is where Christianity is flourishing in the places where the suffering is the greatest.

“Christianity is flourishing wonderfully among the poor and persecuted, while it atrophies among the rich and secure.”

I love the story that a woman named Andrea Dilley tells about her life. She was raised by medical missionaries in Kenya and was exposed to a great deal of suffering and death. As a teenager, she began to question her faith and the goodness of God. When she reached her twenties she completely rejected God and Jesus. What drove her away was her anger at God over the suffering and injustice in the world.

Dilley shares how one evening she got into a philosophical discussion with a young man who, like her, did not believe in God, but also did not believe in an absolute moral law. She found herself in a real argument with him, saying, “If morality is subjective, you cannot say Hitler was wrong. You can’t condemn evil.” It then powerfully struck her that she was arguing with him from a theistic perspective. She said:

“When people ask me, what drove me out the doors of the church and then what brought me back, my answer to both questions is the same. I left the church in part because I was mad at God about human suffering and injustice. And I came back to church because of that same struggle. I realized that I couldn’t even talk about justice without standing inside of a theistic framework. In a naturalistic worldview, a parentless orphan in the slums of Nairobi can only be explained in terms of survival of the fittest. We’re all just animals slumming it in a godless world, fighting for space and resources. The idea of justice doesn’t really mean anything. To talk about justice, you have to talk about objective morality, and to talk about objective morality, you have to talk about God.”

She logically concluded that without God and an absolute moral law, justice is a meaningless word.

What I like about Andrea Dilley is her integrity. She rejected a belief in God because of the pain and suffering that she saw out in the world. She did not realize how her new belief in atheism contradicted her everyday life experience. Her belief in the value of human life and justice came very natural to her. She recognized it to be true. She did not see the contradiction in her life until she got into a discussion with a young man who did not live with that same contradiction. He was an atheist and recognized in his worldview, morality is subjective and therefore you cannot say Hitler’s actions were evil.

To Dilley’s credit, she recognized this massive contradiction and was not willing to live with it. She knew in her heart that human beings are of great value and need to be treated with dignity and respect. So, Andrea Dilley changed her mind and embraced the Christian worldview because it was consistent with the real world in which she lives.

So how should we view pain and suffering in our life? CP Voices Contributor Anthony Costello recently wrote that “...suffering is not random, and while undesired it is yet purposeful. Within the context of God’s ultimate plans, suffering is by design. Tears exist within the broader context of God’s providence, which is the entire redemption of the world. This is our starting place as Jesus people, lest suffering appear pointless and begin to overwhelm our souls.”

Who are you clinging to in the storms of life? Where are you taking your pain? I encourage you to bring your suffering to Jesus, and let Him rescue you.

Father, we are truly thankful that You give us light to live by, though we feel like we’re sometimes out in the dark. We know that You give us light, and understanding, and truth, and I pray, Father, that You would use these words to encourage us and that You truly would help us to build our lives on a strong foundation so that we can weather the storms when they do come. We do thank You for Your goodness and mercy. We thank You that we know that You love us even as we look around this world and see all the pain and suffering and evil. We thank You that You have not abandoned us. We pray these things in Christ’s name, Amen.

Get your copy of Richard’s newest book Reflections on the Existence of God on
Amazon or at existenceofgodbook.com 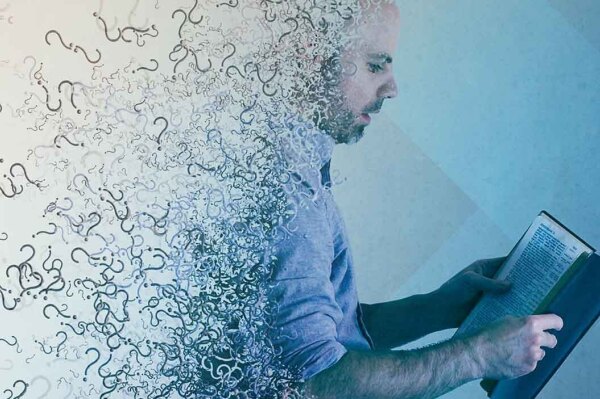