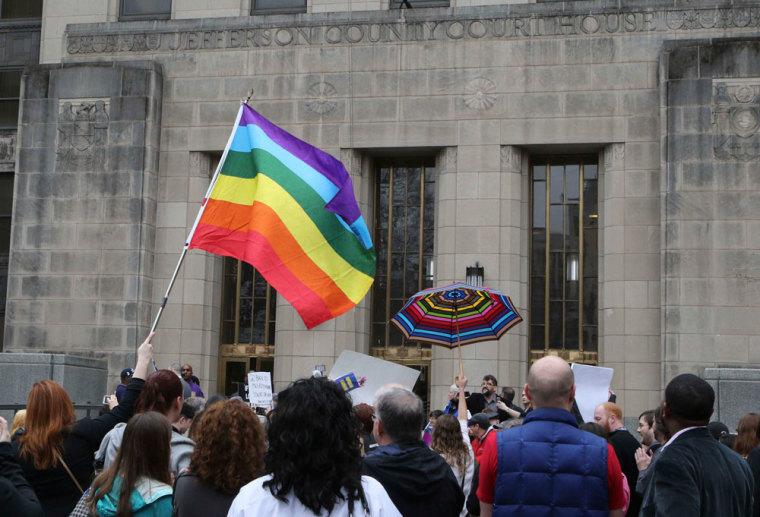 Supporters of same-sex marriage hold a rainbow flag and a rainbow umbrella outside Jefferson County Courthouse in Birmingham, Alabama February 9, 2015. Same-sex couples began marrying in Alabama on Monday despite an attempt by the conservative chief justice of the state's Supreme Court to block judges from issuing marriages licenses to gay men and women in open defiance of a January federal court ruling. | (Photo: Reuters/Marvin Gentry) 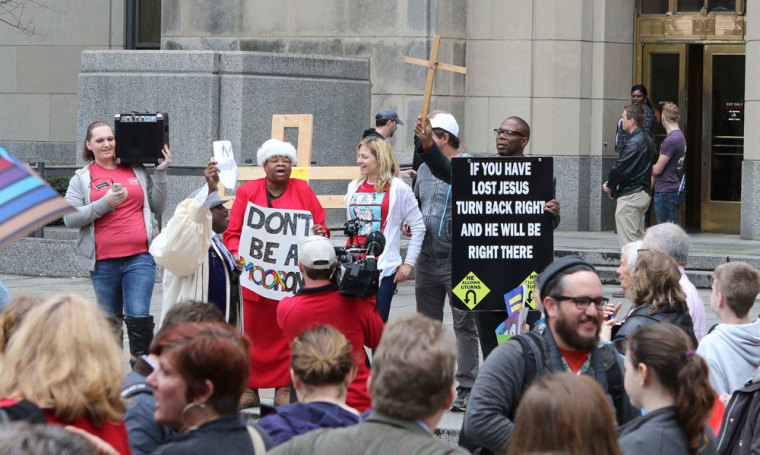 Supporters and opponents of same-sex marriage hold signs on the steps of Jefferson County Courthouse in Birmingham, Alabama February 9, 2015. Same-sex couples began marrying in Alabama on Monday despite an attempt by the conservative chief justice of the state's Supreme Court to block judges from issuing marriages licenses to gay men and women in open defiance of a January federal court ruling. | (Photo: Reuters/Marvin Gentry)
View Photos

There is a state of confusion in the state of Alabama over whether same-sex couples can legally get a marriage license.

1. A Federal judge overstepped her authority.

Judge Callie S. Granade, a federal district judge in Mobile, ruled that an amendment to Alabama's constitution defining marriage as the union of one man and one woman was unconstitutional. A federal district judge, however, can only make rulings that are binding on those before her in court. Her decision does not bind all the state's probate judges, which are the officials who issue marriage licenses.

Even The New York Times, a liberal newspaper that is sympathetic to gay marriage, has acknowledged this fact.

Reporter Emily Bazelon defends Alabama Supreme Court Chief Justice Roy Moore's claim that Granade does not have authority over all of the probate judges in a Feb. 11 article for NYT Magazine cleverly titled, "In Sort-of-Defense of Roy Moore."

After interviewing Florida International University law professor Howard Wasserman, Bazelon concluded Granade's ruling was "peculiar" because, "District-court rulings, even if they're about important matters of policy, usually affect only the people involved in the case in question." Only a federal appeals court or the U.S. Supreme Court can issue a ruling that is binding on the entire state, Bazelon learned.

Additionally, the case for which Granade issued her ruling did not even have a probate judge as a defendent. The state's attorney general was sued even though he has no authority to issue a marriage license.

So, now a single federal judge in Alabama is attempting to rewrite the state's marriage laws on a, literally, case by case basis.

Robert McFarland, vice dean and associate professor of Law at Faulkner University's Thomas Goode Jones School of Law, explained the situation well in an article for The Public Discourse.

"Judge Granade has now set herself up to be the chief probate officer in the state of Alabama. She has not defined marriage, and her failure to do so leaves state actors, especially probate judges, without a definition of the institution for which they are issuing state licenses. Worse, she has provided no legal standards — not even a limiting principle — to guide her administration of Alabama family law, which she has now taken upon herself. She will be rewriting the family laws of Alabama, piecemeal and arbitrarily, from her bench. Rather than conducting legislative hearings regarding the familial rights and duties related to the definition of marriage, Judge Granade will be conducting contempt proceedings in which she will decide on a case-by-case basis which actions of Alabama officials violate the Constitution and which do not," he wrote.

2. The U.S. Supreme Court is being ignored, but has, so far, offered no help.

In United States vs. Windsor, the Supreme Court struck down the part of the federal Defense of Marriage Act that said federal law would not recognize same-sex marriages in states that allow same-sex marriages. Defining marriage was the purview of the states, the Court ruled, so the federal government cannot decide to ignore a marriage license issued by a state. Ironically, Granade cited that decision in striking down Alabama's marriage law.

Since the Supreme Court is expected to decide by this June whether the U.S. Constitution requires states to issue marriage licenses to same-sex couples, the confusion in Alabama could have easily been avoided by simply waiting for the high court's decision. However, Granade, a federal appeals court and the Supreme Court itself have all, so far, declined opportunities to issue a stay in Granade's ruling.

3. In trying to fix the problem, the Alabama Supreme Court could actually make it worse.

The Alabama Supreme Court has been asked by two traditional marriage advocacy groups to order the state's probate judges to not issue marriage licenses to same-sex couples.