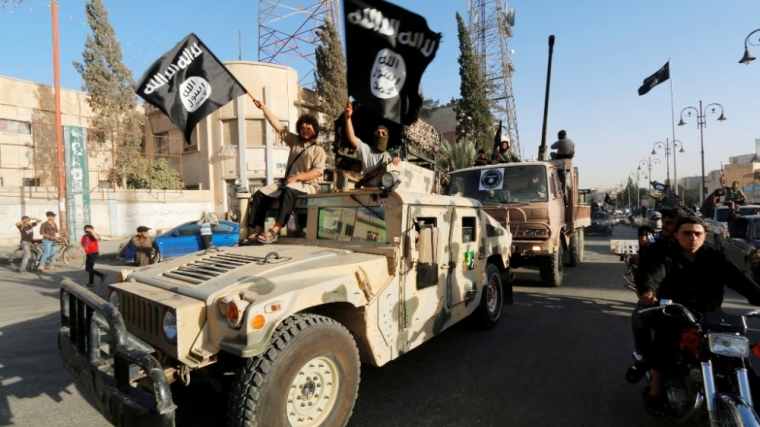 Militant Islamist fighters take part in a military parade along the streets of Syria's northern Raqqa province, June 30, 2014. The fighters held the parade to celebrate their declaration of an Islamic "caliphate" after the group captured territory in neighbouring Iraq, a monitoring service said. The Islamic State, an al-Qaeda offshoot previously known as Islamic State in Iraq and the Levant, posted pictures online on Sunday of people waving black flags from cars and holding guns in the air, the SITE monitoring service said. | (Photo: Reuters) 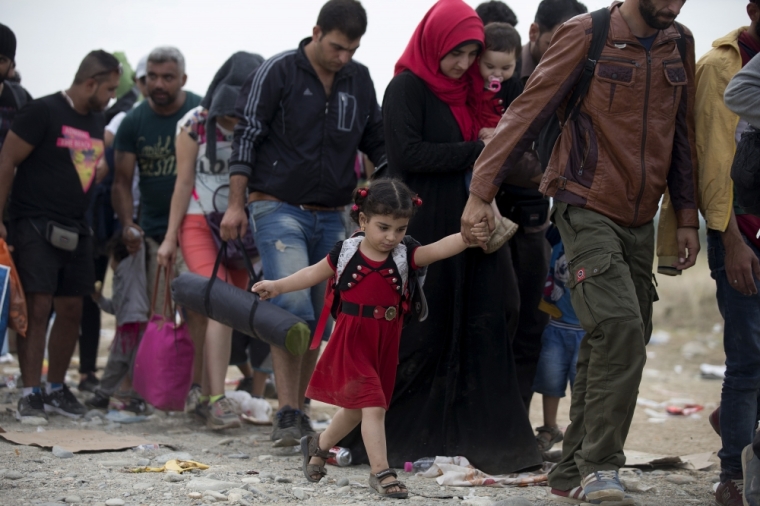 Migrants walk on a dirt road after crossing the Macedonian-Greek border near Gevgelija, Macedonia, September 6, 2015. Several thousand migrants in Macedonia boarded trains on Sunday to travel north after spending a night in a provisional camp. Macedonia has organised trains twice a day to the north border where migrants cross into Serbia to make their way to Hungary. Since June, Macedonian authorities have said that more than 60,000 migrants have entered the country, and around 1,500 entered just in one day, mainly refugees from Syria. | (Photo: Reuters/Stoyan Nenov) 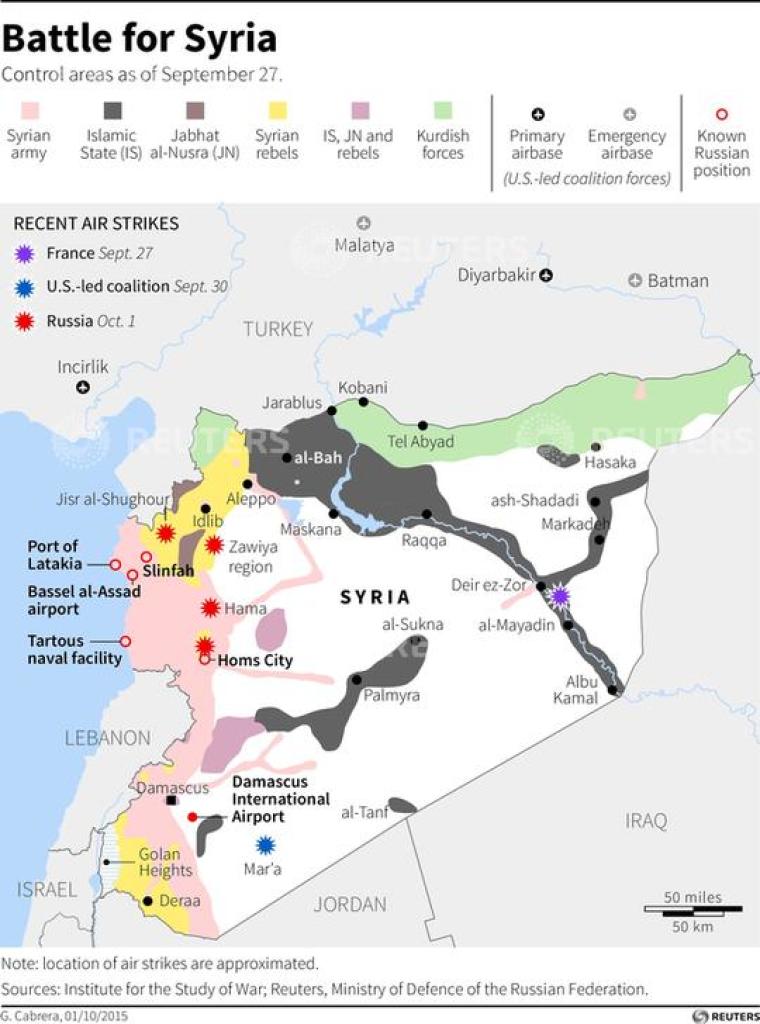 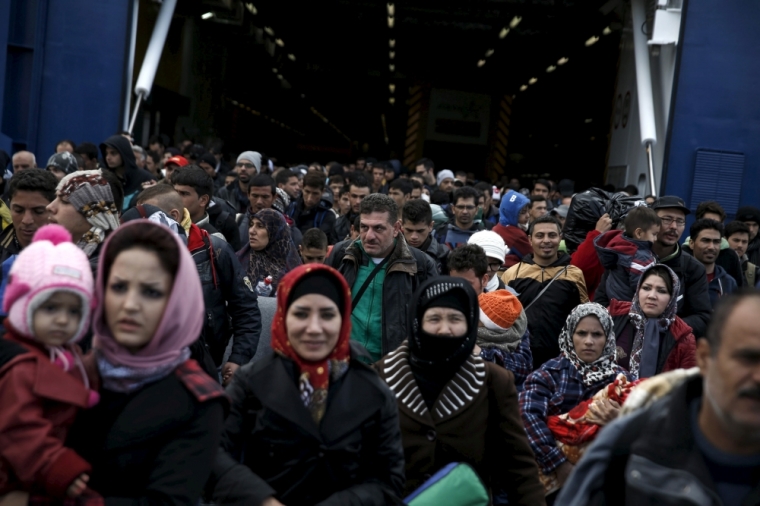 Refugees and migrants arrive aboard the passenger ferry Blue Star Patmos from the island of Lesbos at the port of Piraeus, near Athens, Greece, October 29, 2015. More than half a million migrants have transited through Greece so far this year, many fleeing Syria's civil war on a short but perilous crossing from Turkey on inflatable rubber boats. | (Photo: Reuters/Alkis Konstantinidis) 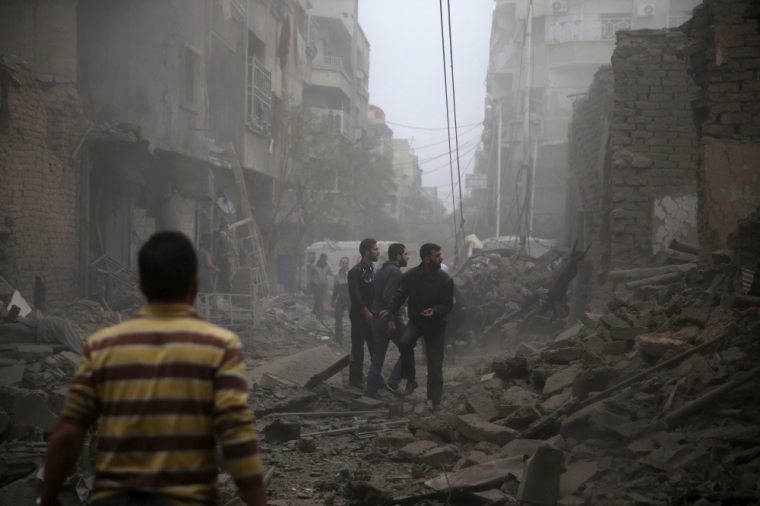 Residents inspect damage from what activists said was an airstrike by forces loyal to Syria's President Bashar al-Assad on the main field hospital in the town of Douma, eastern Ghouta in Damascus, October 29, 2015. | (Photo: Reuters/Bassam Khabieh)
View Photos

The Islamic State terror group has captured the Syrian town of Maheen in the central Homs Province, reports have said, and is now advancing toward the nearby town of Sadad, which is home to nearly 15,000 Syriac Orthodox Christians.

BBC News reported that the terror group, which has captured significant territory across Syria and Iraq, has been focusing on expanding from its mainly northern and eastern strongholds toward Homs in central Syria in recent months.

The Syrian Observatory for Human Rights said that the fall of Maheen started with two suicide blasts on Saturday, with government forces eventually being driven out of the city. The watchdog group said that at least 50 government soldiers were killed or wounded in the fighting.

Clashes have already began on the outskirts of the mostly Christian town of Sadad, which has 14 churches and a monastery, reports added.

Christians and other religious minorities have been heavily persecuted across the towns captured by the Islamic jihadists. Back in August when IS captured the town of Qaryatian, Christians were handed down 11 demands to follow, or face death.

The 11 stipulations, along with paying the Ismalic jizya tax imposed on non-Muslims, prohibited things like the establishment of churches, the displaying of crosses, making Muslims hear Christian prayers or rituals of worship, the hiding of spies, offending Islamic religious beliefs, the carrying of weapons, the sale of pork or wine to Muslims, and failing to dress modestly.

Reuters has reported that IS' conquests continue despite Russia joining airstrike operations in Syria in the past months, and despite the U.S. recently announcing it's sending in ground troops for the first time to participate in a limited capacity in the efforts to stop the terror group's advancement.

While IS is fighting both the Syrian government's army and various rebel groups in the war-torn country, Russia has backed the government of President Bashar al-Assad in his fight against the rebels. The Obama administration remains opposed to Assad, however, and has raised concerns that the Russian airstrikes are targeting his opponents, rather than being fully engaged in combating terrorism.

The four-year-old civil war has killed close to 250,000 people so far, and forced nearly half of Syria's population, or 11 million people, to flee their homes.

The Syrian Democratic Forces army, which has been fighting IS across the country, meanwhile announced on Saturday that it will be intensifying its campaign to liberate the southern countryside of al- Hasakah that has fallen under the terror group's hands.

"Today, we declare the first step of our military action within a plan of liberating the whole Syria from the terrorist gangs. On this base, we declare the start of a campaign to liberate the southern countryside of al- Hasakah with the participation of all factions of Syrian Democratic Forces and the support of U.S.-led coalition warplanes," the group's General command said in a statement.

"Our campaign is going to continue until liberating all the occupied areas in al- Hasakah by terrorist organization of Daesh and until restoring security and stability to the area," it added.

It also urged civilians to get away from IS positions, warning them that jihadists are trying to use people as human shields to protect themselves from the ongoing airstrikes.