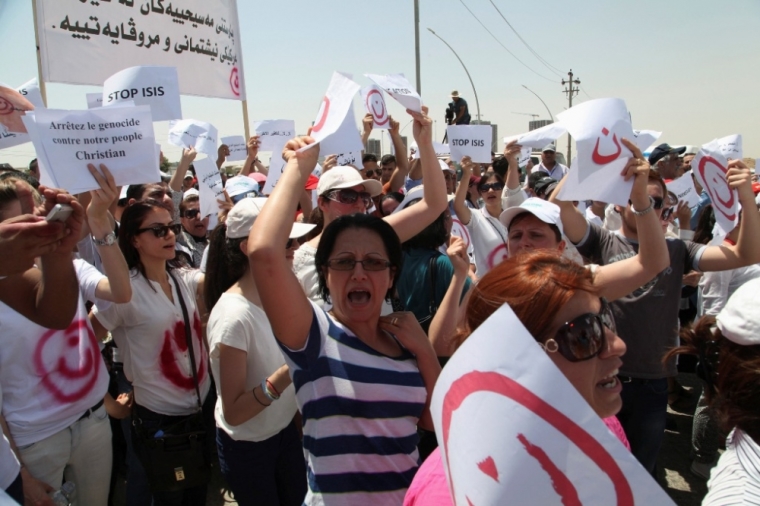 Christian demonstrators carry signs as they protest against militants of the Islamic State, formerly known as the Islamic State in Iraq and the Levant, in Arbil, north of Baghdad July 24, 2014. Hundreds of Iraqi Christians marched to the United Nations office in Arbil city on Thursday calling for help for families who fled in the face of threats by Islamic State militants. | (Photo: Reuters/Azad Lashkari) 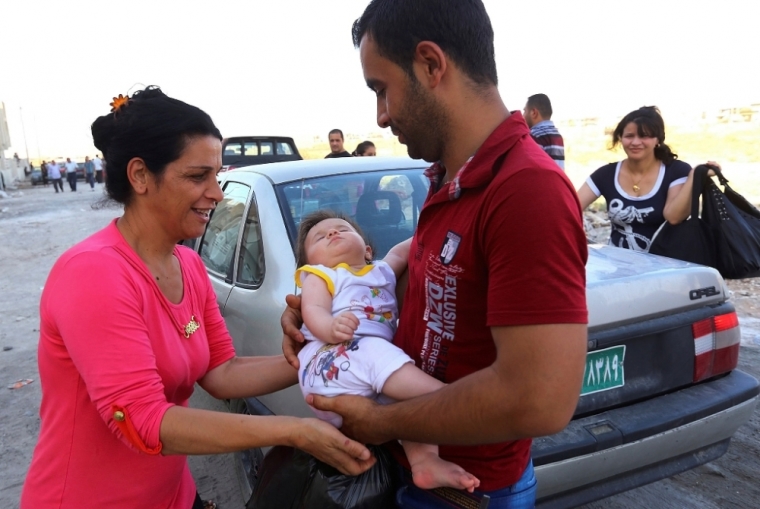 An Iraqi Christian family fleeing the violence in the Iraqi city of Mosul, arrives at the town of Qaraqush in the province of Nineveh, July 19, 2014. The ancient Christian community of the northern Iraqi city of Mosul had all but fled by Saturday, ending a presence stretching back nearly two millennia after radical Islamists set them a midday deadline to submit to Islamic rule or leave. The ultimatum by the Islamic State drove out the few hundred Christians who had stayed on when the group's hardline Sunni Muslim fighters overran Mosul a month ago, threatening Christians and the diverse city's other religious communities. | (Photo: Reuters/Stringer) 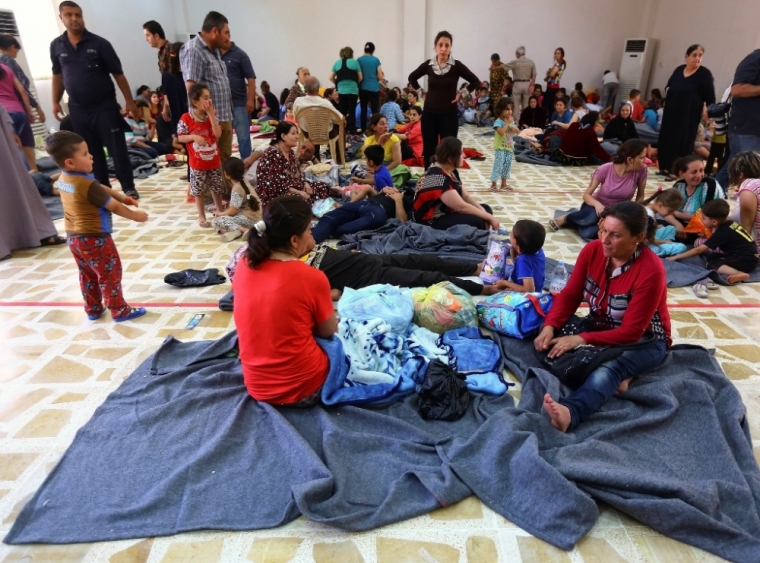 Christian families, who fled from violence in Mosul, gather inside a building which was used as a social club in Arbil, in Iraq's Kurdistan region June 26, 2014. Iraqi forces launched an airborne assault on rebel-held Tikrit on Thursday with commandos flown into a stadium in helicopters, at least one of which crashed after taking fire from insurgents who have seized northern cities. | (Photo: Reuters/Stringer) 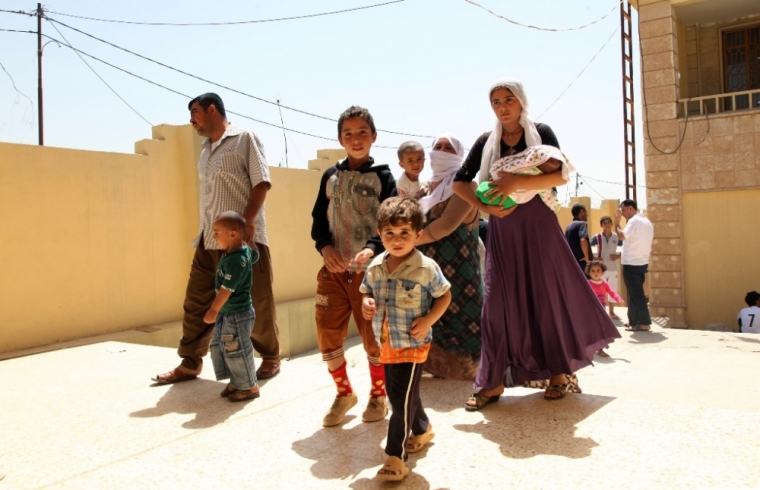 Displaced families from the minority Yazidi sect, fleeing the violence in the Iraqi town of Sinjarl west of Mosul, arrive at Dohuk province, August 4, 2014. Iraq's Prime Minister Nuri al-Maliki ordered his air force for the first time to back Kurdish forces against Islamic State fighters after the Sunni militants made another dramatic push through the north, state television reported on Monday. | (Photo: Reuters/Ari Jala) 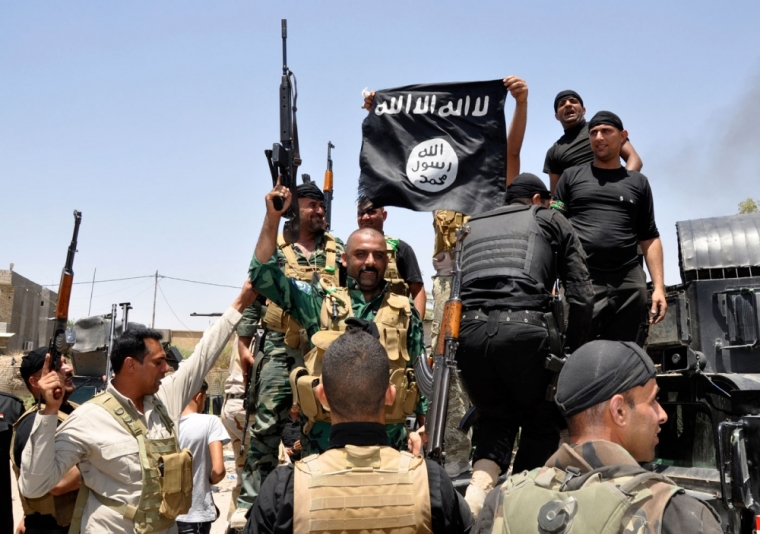 Iraqi security forces pull down a flag belonging to Sunni militant group Islamic State of Iraq and the Levant during a patrol in the town of Dalli Abbas in Diyala province, June 30, 2014. The leader of the al Qaeda offshoot now calling itself the Islamic State has called on Muslims worldwide to take up arms and flock to the "caliphate" it has declared on captured Syrian and Iraqi soil. Picture taken June 30, 2014. | (Photo: Reuters/Stringer)
View Photos

President Barack Obama announced Thursday night at the White House that the U.S. military will engage in targeted airstrikes against Islamic State terrorist convoys in Iraq if they advance toward the U.S. embassy in Baghdad or the consulate in Arbil.

Obama emphasized that while he believes the "U.S.cannot and should not intervene every time there's a crisis in the world," he said his administration is taking action in this case to help "avert a massacre."

"In recent days, these terrorists have continued to move across Iraq, and have neared the city of Arbil, where American diplomats and civilians serve at our consulate and American military personnel advise Iraqi forces," Obama said. "We're also providing emergency assistance to the Iraqi government and Kurdish forces so they can more effectively wage the fight against ISIL."

"We've begun operations to help save Iraqi civilians stranded on the mountain," Obama said. "As ISIL has marched across Iraq, it has waged a ruthless campaign against innocent Iraqis. And these terrorists have been especially barbaric toward religious minorities, including Christians and Yazidis."

"Yazidi women, men and children from the area of Sinjar have fled for their lives by the thousands, perhaps tens of thousands," noted Obama, who said the U.S. had to act to "carefully and responsibly prevent a potential act of genocide."

"Today, America is coming to help," Obama commented, in response to Iraqi civilians' pleas for intervention.

By Thursday night, the Defense Department said it had already dropped 72 bundles of food (8,000 ready-to-eat meals) and 5,200 gallons water to the estimated 40,000 Iraqis stranded on the peaks of Mount Sinjar.

Prior to Obama's announcement, White House Press Secretary Josh Earnest announced Thursday afternoon that while the administration would be taking action to combat the Islamic State terrorists who have a "callous disregard for human rights," he emphasized that there is "no American military solution for the problems in Iraq."

Earnest further explained that while the U.S. was considering airstrikes, the administration hadn't yet committed to taking direct action, but did plan to coordinate strategic efforts with Iraqi and Kurdish forces.

"Iraqi and Kurdish authorities are focused on this specific threat to the nation, and to the vulnerable populations that live in these areas," Earnest said. "The U.S. government and military is supporting the ongoing efforts of Iraqi and Kurdish officials to address this urgent humanitarian crisis that exists."

Earnest added that the U.S. has military personnel on the ground in Iraq who are working with Iraqi and Kurdish Security Forces to evaluate their capabilities and will be providing an assessment of the situation to the administration.

"The militant group said in a statement on its Twitter account that its fighters had seized 15 towns, the strategic Mosul dam on the Tigris River and a military base, in an ongoing offensive that began at the weekend," Reuters reports. "Kurdish officials say their forces still control the dam, Iraq's biggest."

Reuters also reports that two witnesses said Thursday that "Islamic State fighters had hoisted the group's black flag over the dam, which could allow the militants to flood major cities or cut off significant water supplies and electricity."

Mark Arabo, national spokesman for the group "Ending Genocide in Iraq," told CNN Wednesday that "Christianity in the city of Mosel is dead and a Christian holocaust is in our midst."

"This is truly a living nightmare that's not going away,"Arabo explained. "Day-by-day, it's getting worse and worse. More children are being beheaded; mothers are being raped and killed; fathers are being hung. Right now, 300,000 Christians are fleeing, living in neighboring cities, just wanting a chance — not just to survive, but to live."

Arabo, who said his group met with Deputy National Security Advisor Ben Rhodes at the White House last week, has been asking the administration to take action against the Islamic State and protested outside the White House in support of Iraqi Christians seven weeks ago.

"The world hasn't seen an evil like this for generations," he added. "There's actually a park in Mosul (the second largest city in Iraq) where they put beheaded children on a stick. These are crimes against humanity."

Ninety five percent of all Christians have fled Mosul and 5 percent have converted to Islam, according to Arabo. He further explained that even if Christians are able to meet the Islamic State's demands to pay a fine instead of converting to Islam or be killed, their homes and property are being taken and men are watching the terror group capture and kidnap their wives and daughters.

Andrew White, an Anglican canon at St George's church in Baghdad, who has served the Christian community in Baghdad for 10 years, said in a newsletter that the Islamic State has been able to commit atrocities in Iraq without fear of reprisal because the world's attention is focused on the Israel-Hamas conflict.

"The Islamic State simply said we can do anything now the world is just looking at Gaza," White said in the newsletter sent to supporters of the Foundation for Relief and Reconciliation in the Middle East, according to the Anglican Communion News Service.

"It is as if hell has broken out here and nobody cares … The situation is so serious and it is very easy to feel forgotten," White said.

He continued: "Even in Baghdad people are terrified of what is happening around us. … The number of kidnappings here has soared and people simply do not know what is going to happen next."

On Tuesday, U.S. Ambassador to the United Nations Samantha Power released a statement announcing that the administration is condemning the Islamic State's attacks in Iraq.

"I condemn in the strongest possible terms the Islamic State in Iraq and the Levant ... [And ISIL's] reported abuse, kidnapping, torture and executions of Iraq's religious and ethnic minorities and its systematic destruction of religious and cultural sites are appalling."

"The U.S. supports the Iraqi Security Forces and Peshmerga Forces working to defend these areas against ISIL. .... The U.S. is committed to helping the people of Iraq as they confront the security and humanitarian challenges in their fight against ISIL. Iraq's leaders must move swiftly to form a new, fully inclusive government that takes into account the rights, aspirations and legitimate concerns of all of Iraq's communities," Power added.

Islamic State terrorists, an offshoot of al Qaeda, have come within a 30 minute drive of Arbil, according to Reuters.