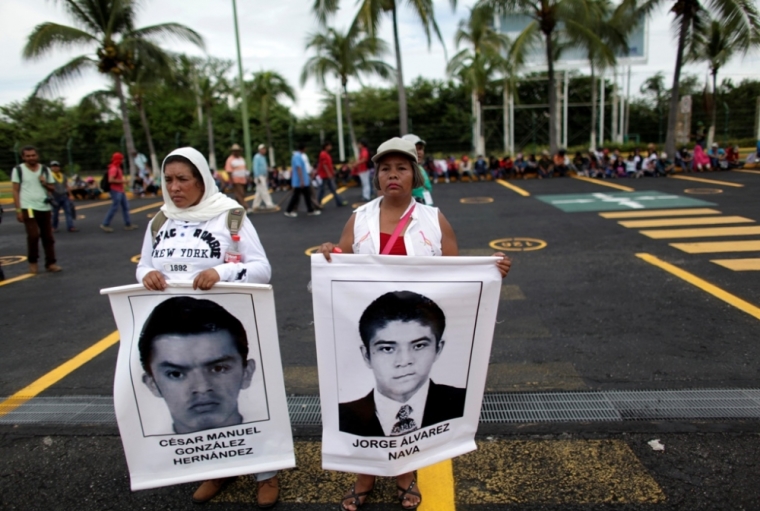 Relatives hold photographs of trainee teachers on the parking lot of the airport during a protest in reprisal for the apparent killing of 43 trainee teachers, in Acapulco, November 10, 2014. According to the government, corrupt police in league with a local drug gang abducted and apparently murdered the students in the southwestern sate of Guerrero in late September. The government says it found charred remains of dozens of bodies in a garbage dump and in a river, and that three men detained in the case admitted setting fire to the victims. | (Photo: Reuters/Daniel Becerril) 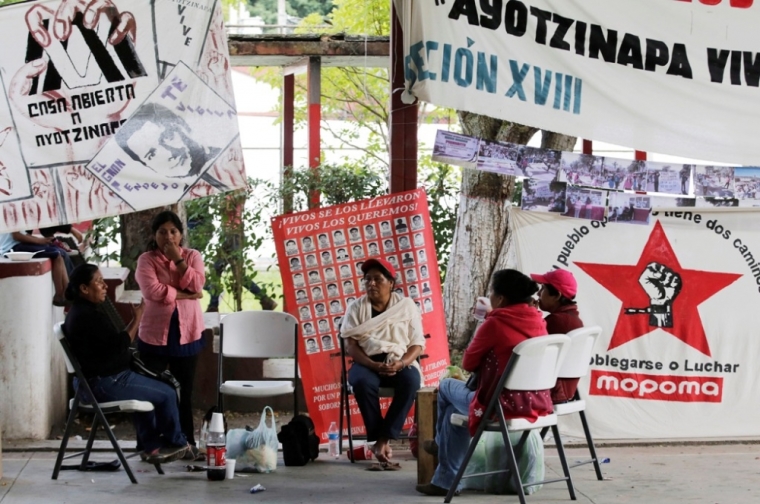 Relatives of missing students sit next to a banner reading "they took them alive, we want them back alive" outside their Ayotzinapa Teacher Training College in Tixtla, near Chilpancingo, in the southwestern state of Guerrero, November 10, 2014. The students were abducted by corrupt police in September. Though the government said on Friday it looked as though the students had been killed, then incinerated by gangsters working with the police, it stopped short of confirming their deaths for lack of definitive evidence. | (Photo: Reuters/Henry Romero) 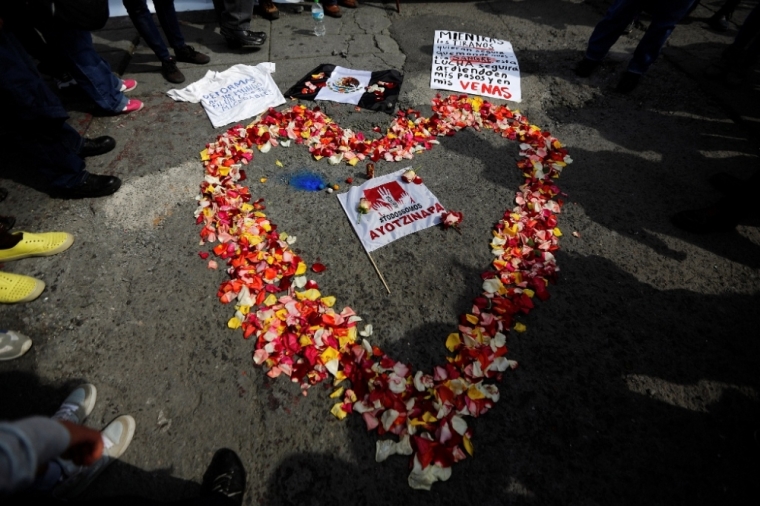 Flowers arranged in the shape of a heart are seen during a protest to demand more information about the missing students of the Ayotzinapa Teachers' Training College "Raul Isidro Burgos" at Zocalo Square in Mexico City, November 9, 2014. | (Photo: Reuters/Tomas Bravo)
View Photos

Roman Catholic Church bishops condemned the ongoing "corruption, impunity and violence" in Mexico over the missing 43 students believed to have been massacred by a criminal gang after being handed over by corrupt policemen. Massive protests in Acapulco against government inaction meanwhile resulted in clashes that left 16 officers injured.

"Adding our voice to theirs and to all of society, we say, 'Enough with so much corruption, impunity and violence,'" the Mexican bishops' conference said, standing in solidarity with the victims' families.

"Respectfully and energetically, we ask the authorities to take the investigation to its final consequences so that it's known with certainty what has happened with the disappeared, and the intellectual authors ... are punished with the full weight of the law," the statement continued, according to Catholic News Service.

"At the same time, we demand the enforcing of the rule of law to put an end to all forms of violence, illicit activities, corruption, impunity and the complicity of some authorities with organized crime."

The Guardian reported that protests led to police clashes in Acapulco over the government's response to the case, where 43 student teachers were taken in southern Mexico six weeks ago.

The kidnappings in September were allegedly carried out by police officers who turned the students over to the Guerreros Unidos drug cartel. Three students were reported to have been killed in the incident, and while there is no official confirmation on what happened to the others, authorities have stated they believe the students were killed by the gang members.

Attorney General Jesús Murillo revealed last week that a large group of young people were massacred in a rubbish tip near Iguala shortly after the students were taken. The victims were then burned on a large pyre for 14 hours, making identification of the remains very difficult.

The protests in Acapulco on Monday resulted in 16 injured officers, but there is no official number of how many demonstrators were injured.

Mexican citizens have been expressing their increasing frustration with government corruption and inability to deal with the country's large criminal gangs problem.

The Bishop of Campeche, His Exc. Mgr. José Francisco Gonzalez, said in his homily on Sunday: "We live in a very corrupt country, where the people and the politicians are not interested in living in the truth."

He added, "What happened in Iguala is not an isolated case."

Gonzalez called on people to refuse to cover or protect criminals, and encouraged them to denounce irresponsible politicians, who he accused of having "turned away from God and the truth."

He reminded the congregation that "Jesus cleansed the Temple, which had become a den of thieves and corrupt people, and that is what is lacking in our country."

Jesuit Fr. Conrado Zepeda separately commented on the protests, and said that the case with the massacred students was "the straw that broke the camel's back."

"It has to do with the young, students, the poor, people unable to defend themselves being attacked in this way. This is why civil society has revolted," Zepeda said.