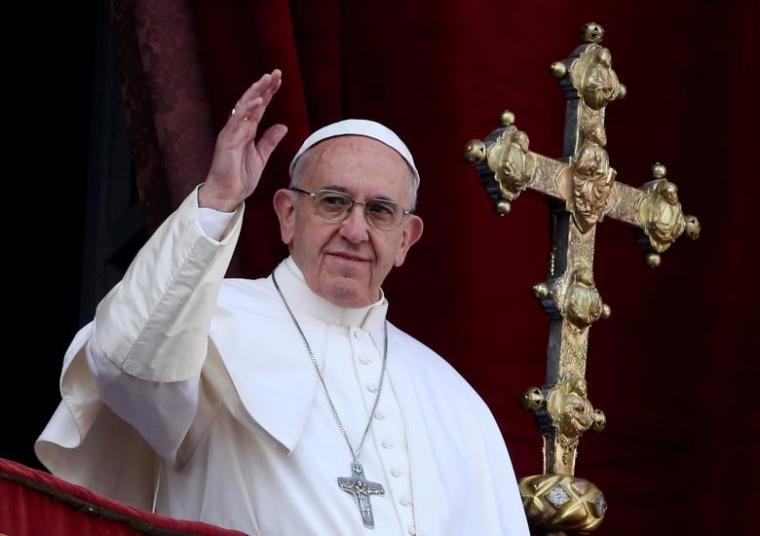 Pope Francis waves after delivering his ''Urbi et Orbi'' (to the city and the world) message from the balcony overlooking St. Peter's Square at the Vatican, Rome, Italy, December 25, 2016. | (Photo: Reuters/Alessandro Bianchi) 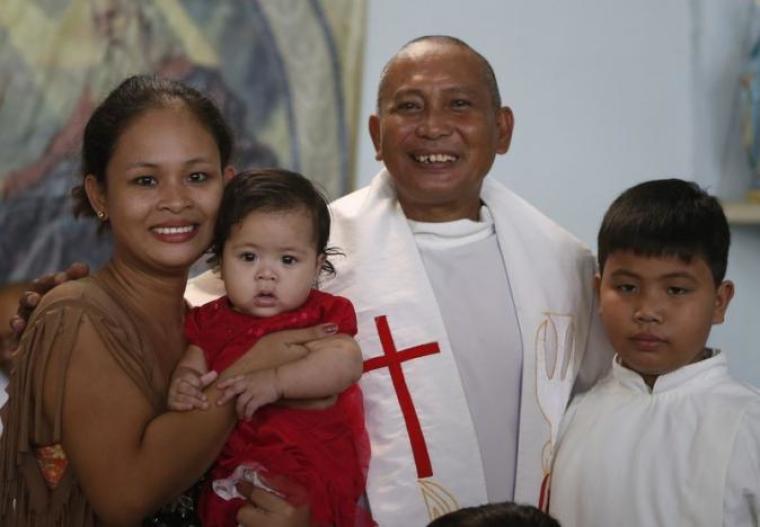 Roman Catholic priest Father Elmer Cajilig smiles as he poses with his common law wife Kristine and their children after a holy mass at a chapel in Lambunao, Iloilo on Panay island in central Philippines January 11, 2015. | (Photo: REUTERS/Erik De Castro)
View Photos

Pope Francis said Thursday that he's open to the idea of ordaining married men to serve as priests in remote areas suffering from priest shortages.

It was unclear Friday, however, what impact this discussion will have on the United States, which is also experiencing a shortage of priests.

In an interview published Thursday with Germany's Die Zeit, Francis said while removing the celibacy rule is not the answer to the Catholic Church's priest shortage, he was open to studying whether "viri probati" — or married men of proven faith — could be ordained.

"We must consider if viri probati is a possibility. Then we must determine what tasks they can perform, for example, in remote communities," he was quoted as saying.

The pontiff told the publication that a shortage of priests had become an "enormous problem," and noted that the first response must be prayer combined with a more intense focus on "working with young people who are seeking orientation."

He further asked that the discussion on married priests be faced "fearlessly."

"Fears close doors, freedom opens them, and even when [the space for] liberty is small, it opens a window," he said.

According to ABC, the "viri probati" proposal has been around for decades, but it has drawn fresh attention in recent years due to Pope Francis' appreciation of the challenges facing the church in places like Brazil, a huge Catholic country with an acute shortage of priests.

The Center for Applied Research in the Apostolate at Georgetown University highlights data that shows the Catholic Church has been increasingly turning to Africa and Asia to find priests to staff its parishes in the U.S., Europe and other parts of the world because it's now struggling to find native priests.

The Christian Post reached out the several Catholic archdioceses as well as the United States Conference of Catholic Bishops for comment on the discussion Friday and many were either not prepared to comment on the development or were unable to respond in time for this report.

Patricia Garcia, a lifelong Catholic and an administrative worker at the Corpus Christi Catholic Church in New York City told CP Friday that she agrees with the pope's approach and noted that the shortage of priests was not just an issue for remote areas.

"I didn't even know this but I agree," said Garcia. "Working at a church and working regularly with the priest I see that we don't have as many priests. Especially this church, we only have one priest, the pastor.

"Things are not the same as they used to be. It's not that your beliefs change. It doesn't mean that my belief as a Catholic has changed. A lot of people are not doing like before [when] they would go into priesthood. There's a lot of churches and not that many priests to go around to service the area," she said.

"As long as they are married and they have all their sacraments. It's a good idea if you look at it with an open mind. But if you want to be stuck in the old ages, how it used to be, we can't be stuck there because that's not how we're living right now. Unfortunately, everything has changed. We can't have it every way we want it. We are moving on in trying to help each other as well," she added.

Francis said while he favors a celibate priesthood, celibacy technically can be up for discussion since it's a discipline of the Church, not a dogma.

Crux notes that most Catholic priests are expected to remain celibate, although Catholicism does include 23 Eastern churches in full communion with Rome whose clergy are allowed to marry.

There are also a few hundred former Protestant ministers in the U.S., who've entered the Catholic Church as married men and permitted to remain married after being ordained as Catholic priests.

Responding to other questions in his most recent interview, the pontiff said he was also concerned about the rise of populism in the West and called it "evil."

"Populism is evil and ends badly, as the past century has shown," he said, arguing that it is a means of "using the people" by offering them a messiah.