Americans with a high level of religious knowledge have a warmer view of Jews, Catholics, mainline Protestants and Buddhists than they have of evangelical Christians and are least warm to Muslims and atheists, according to a new study from the Pew Research Center.

The findings of the What Americans Know About Religion study came from a survey that asked nearly 11,000 U.S. adults questions on a variety of religious topics.

Some of the survey questions were used to examine whether Americans with higher levels of religious knowledge had more positive attitudes toward various religious groups. In general, it was found that the more people know about a particular religion, the higher they would rate it on a thermometer scale ranging from zero to 100.

When it comes to evangelicals, however, respondents reflected an exception to that trend.

“One notable exception to this pattern is evangelical Christians. Respondents who answer at least 25 religious knowledge questions rate evangelicals more coolly (43 degrees, on average) than those who correctly get eight or fewer questions right (53 degrees). The survey also shows little connection between overall levels of religious knowledge and views of Mormons and Catholics, once demographic factors are taken into account,” Pew reports. 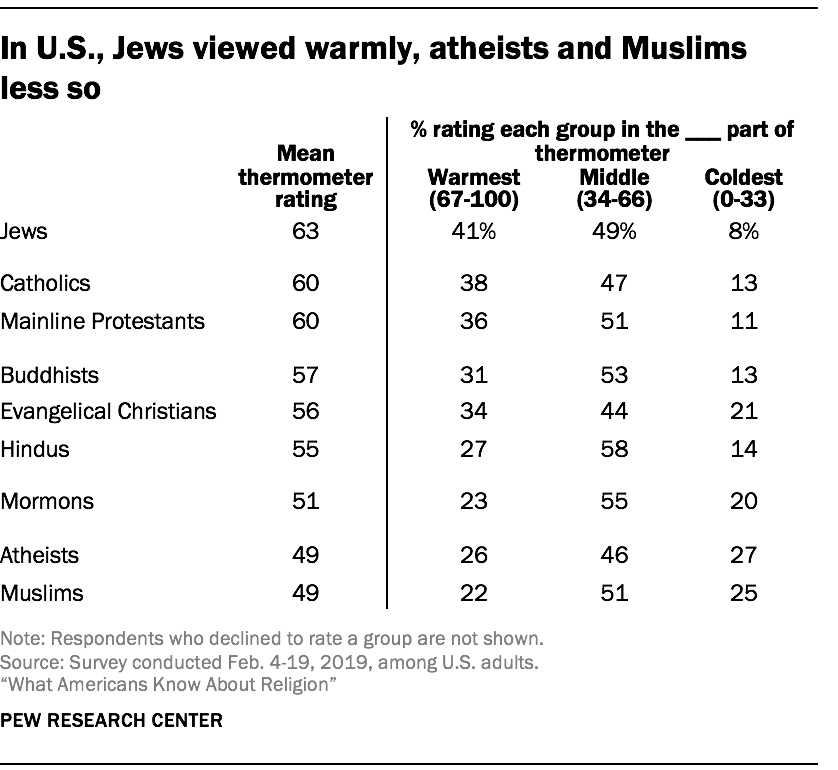 Generally, respondents in the survey expressed the most warmth for Jews compared to other religions ranked.

“In the U.S., no major religious group is viewed more warmly by the overall public than Jews. When asked to rate a variety of groups on a ‘feeling thermometer’ ranging from 0 (coldest and most negative) to 100 (warmest and most positive), Americans give Jews an average rating of 63 degrees, and four-in-ten people rate Jews in the warmest portion of the scale (at 67 degrees or higher),” the Pew report said.

Catholics and mainline Protestants each receive an average rating of 60 degrees, followed by Buddhists (57 degrees) and evangelical Christians (56 degrees), as well as Hindus (55 degrees). 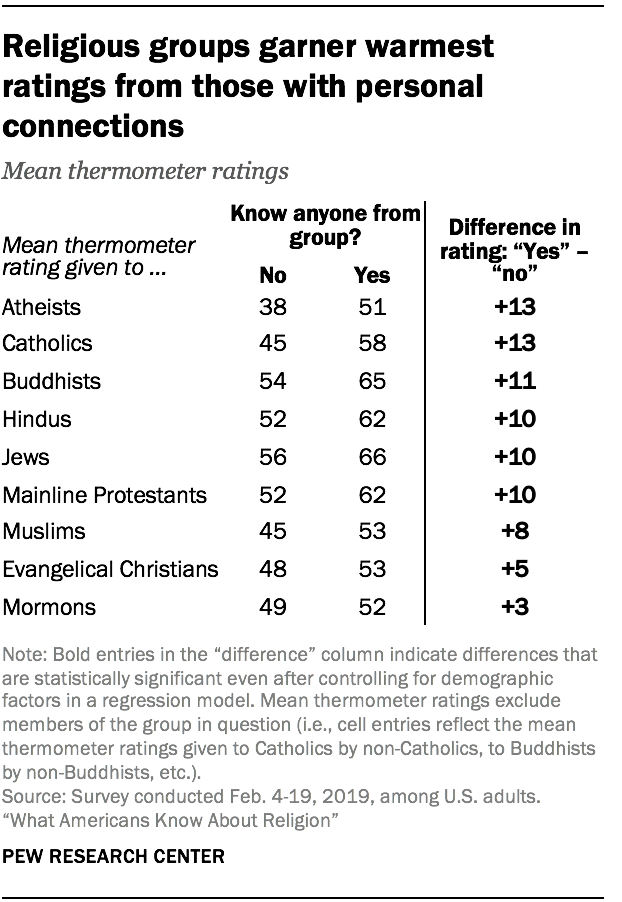 In 2017, when Pew conducted a similar survey, evangelical Christians, rated relatively warmly at 61 degrees — the same mean rating the group had since Americans were surveyed on the issue in 2014.

The diminishing favorability of evangelicals has been tied by some to the election of President Donald Trump.

On Monday, an NPR/PBS NewsHour/Marist poll showed that 73 percent of white evangelical Christians approve of the job Trump is doing as president. Only 23 percent disapprove and four percent said they were unsure.

Earlier this month, Peter Wehner, a senior fellow at the Ethics and Public Policy Center who writes widely on political, cultural, religious, and national security issues and is the author of The Death of Politics: How to Heal Our Frayed Republic After Trump, argued in The Atlantic that the evangelical Christian witness has been damaged by their support of the president.

“There’s a very high cost to our politics for celebrating the Trump style, but what is most personally painful to me as a person of the Christian faith is the cost to the Christian witness. Nonchalantly jettisoning the ethic of Jesus in favor of a political leader who embraces the ethic of Thrasymachus and Nietzsche—might makes right, the strong should rule over the weak, justice has no intrinsic worth, moral values are socially constructed and subjective—is troubling enough,” he wrote.

Atheists and Muslims, both with a mean reading of 49, received the lowest rating in the survey while Mormons earned an average rating of 51 degrees.