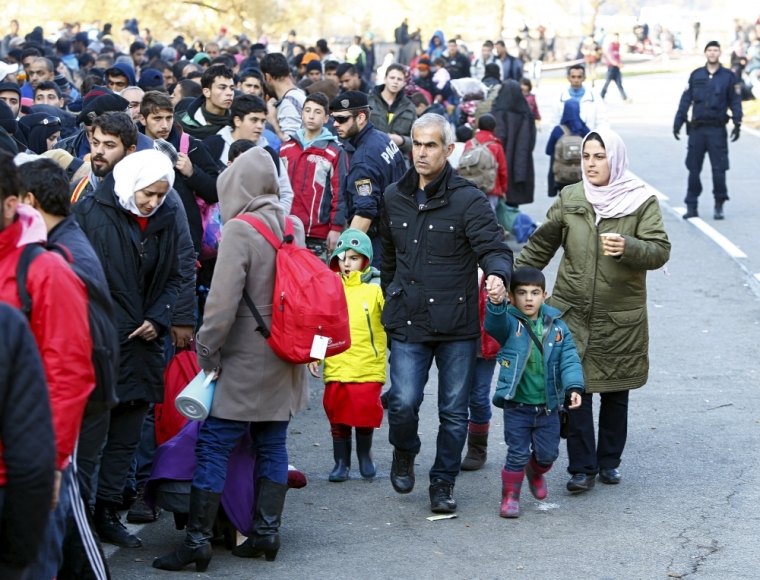 Syrian migrants Zake Khalil (3rdR), his wife Nagwa (R) and their four children Joan, Torin, Ellen and newborn Hevin arrive at the Austrian-German border in Achleiten near Passau, Germany, October 27, 2015. The premier of the state of Bavaria Premier Horst Seehofer criticised Austria on Tuesday for failing to coordinate the flow of migrants into southern Germany even as he renewed a challenge to Chancellor Angela Merkel over her management of the refugee crisis. Germany is taking in more migrants than any other EU state. It expects 800,000 to 1 million people, many from war zones in the Middle East, Africa and Afghanistan, to arrive this year. | (Photo: Reuters/Michaela Rehle) 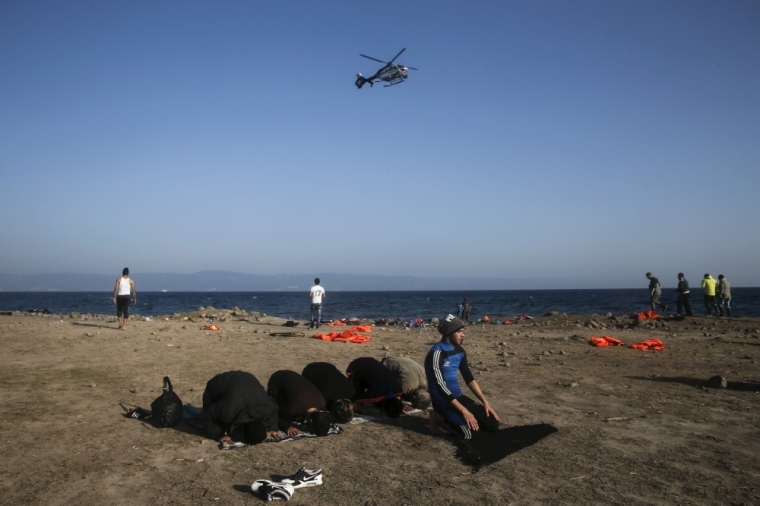 A Frontex helicopter flies over as Syrian refugees pray after arriving on a boat on the Greek island of Lesbos, November 6, 2015. Since the start of the year, over 590,000 people have crossed into Greece, the frontline of a massive westward population shift from war-ravaged Syria and beyond. | (Photo: Reuters/Alkis Konstantinidis) 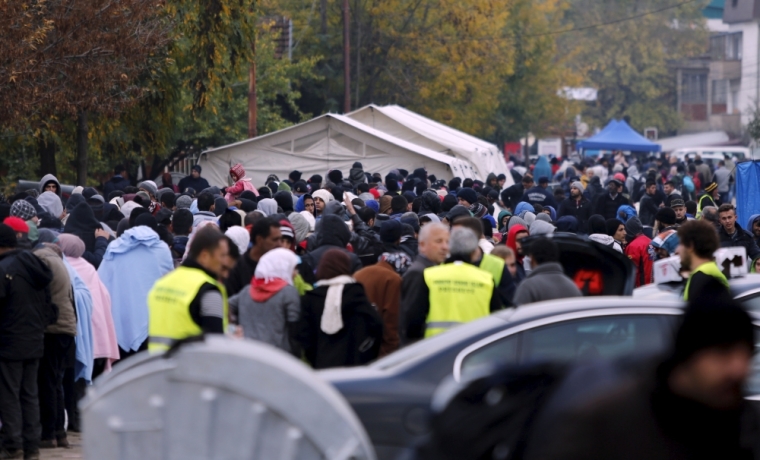 Migrants wait to enter a registration camp in Preshevo, Serbia, October 24, 2015. European Commission President Jean-Claude Juncker has called an extraordinary meeting of several European leaders on Sunday to tackle the migrant crisis in the western Balkans as thousands trying to reach Germany are trapped in deteriorating conditions. The Commission said in a statement on Wednesday that Juncker had invited the heads of state or government of Austria, Bulgaria, Croatia, Macedonia, Germany, Greece, Hungary, Romania, Serbia and Slovenia, plus key organisations involved. | (Photo: Reuters/Ognen Teofilovski) 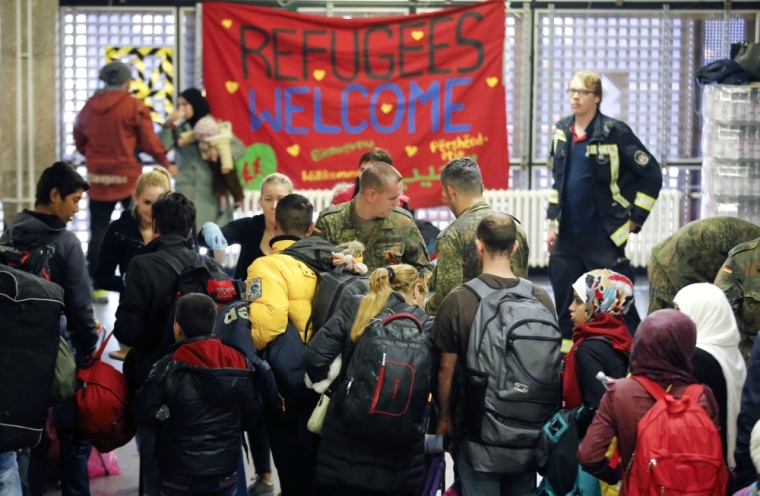 Volunteers and German Bundeswehr, armed forces soldiers, distrubute food to migrants before they are transported by bus to a refugee camp in the capital after arriving by train from Salzburg, Austria, at Schoenefeld railway station in Berlin, Germany, October 5, 2015. | (Photo: Reuters/Fabrizio Bensch) 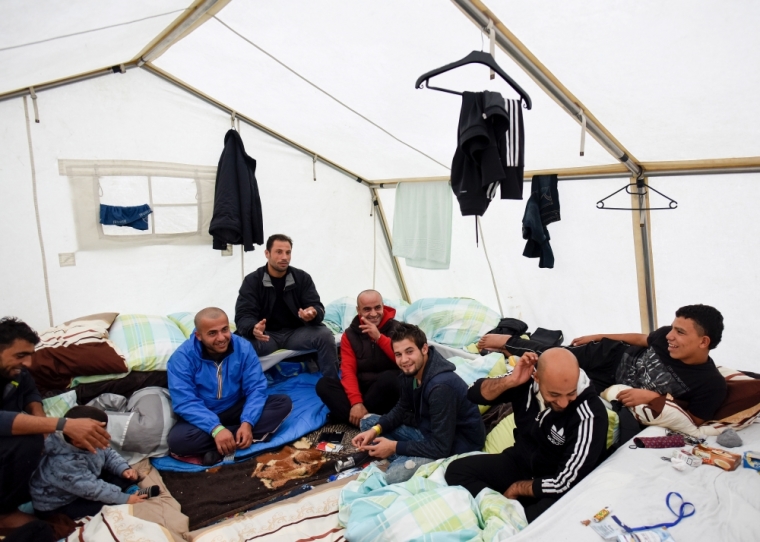 Migrants from Syria sit in their tent in a refugee camp in Celle, Lower-Saxony, Germany, October 15, 2015. With the approach of winter, authorities are scrambling to find warm places to stay for the thousands of refugees streaming into Germany every day. In desperation, they have turned to sports halls, youth hostels and empty office buildings. But as these options dry up, tent cities have become the fall-back plan: despite falling temperatures, a survey by German newspaper Die Welt showed at least 42,000 refugees were still living in tents. | (Photo: Reuters/Fabian Bimmer)
View Photos

The U.S. Conference of Catholic Bishops has vowed that church outreach programs to refugees will continue operating despite politicians, mainly Republicans, calling for America's borders to be closed off.

"We at the United States Conference of Catholic Bishops and Catholic Charities, we are always open to helping families who come into the United States in need of help," said Archbishop Joseph E. Kurtz of Louisville, who is president of the USCCB, according to Catholic News Service.

"We have that tradition of doing it and we're going to contribute."

Kurtz made the remarks at the bishops' annual fall general assembly, taking place this week in Baltimore.

He clarified, however, that any church assistance for refugees will be carried out under government contracts, meaning the refugees will have been vetoed by government agencies before the churches get involved.

"Our efforts are going to be to reach out to people and to serve them," the archbishop said.

"My hope would be that the church would continue to be able, within the law, to help those families."

Kurtz added that USCCB representatives met with President Barack Obama last week to discuss outreach to refugees and immigration issues, but as it was a private meeting, did not want to disclose details about what was said.

Obama has separately said that the U.S. will continue welcoming in Syrian refugees despite the terror attacks in Paris on Friday, and slammed suggestions that only Christian newcomers should be welcomed.

"When I hear folks say that, well, maybe we should just admit the Christians but not the Muslims, when I hear political leaders suggesting that there would be a religious test for which person who's fleeing from a war-torn country is admitted, when some of those folks themselves come from families who benefited from protection when they were fleeing political persecution, that's shameful," Obama said at the G-20 summit in Turkey on Monday.

Over half of the nation's governors have said they are against plans to relocate thousands of Syrian refugees across the country, however, citing security concerns. GOP presidential candidates, including Dr. Ben Carson, Donald Trump, Sen. Marco Rubio, Gov. Chris Christie and Sen. Ted Cruz have all also spoken out on their concerns.

"There is currently no ability to vet these people. By letting refugees into our country without vetting we are putting America at risk. If our president cannot see the risk, then we must rise to the challenge and protect our country," Carson said in a statement.

Rubio added: "You can have a thousand people come in and 999 of them are just poor people fleeing oppression and violence. But one of them is an ISIS fighter. If that's the case, you have a problem."

The terror attacks on Paris have prompted various responses from American Evangelicals as well.

The Rev. Franklin Graham called on Christians to pray for victims of the violence, but said that unchecked Muslim immigration to the U.S. could open the door to a repeat of such violence in America.

"I've said this before, and many people criticized me for saying it. We must reform our immigration policies in the United States. We cannot allow Muslim immigrants to come across our borders unchecked while we are fighting this war on terror. If we continue to allow Muslim immigration, we'll see much more of what happened in Paris — it's on our doorstep," Graham said on Sunday.

But Evangelical refugee relief organizations, such as World Relief, have insisted that it is wrong to presume that accepting refugees will make the country more vulnerable to terror attacks.

"I have been traveling the country quite a bit in the last few months and I have been to a lot of churches and a lot of good people and definitely the fear factor on the radical elements of Islam coming into our country through the refugee program is certainly out there," said Stephen Bauman, the president and CEO of World Relief.

"But if you look at the 35 years of refugee resettlement in our nation, over 3 million since the mid to late '70s, and there has been no one from that group of people that are terrorists or have carried out a terrorist attack," he added.