A protester holds a placard during a rally by hundreds of Christians against recent attacks on churches nationwide, in Mumbai, February 9, 2015. Five churches in the Indian capital New Delhi have reported incidents of arson, vandalism and burglary. The latest was reported last week when an individual stole ceremonial items. | (Photo: Reuters/Danish Siddiqui) 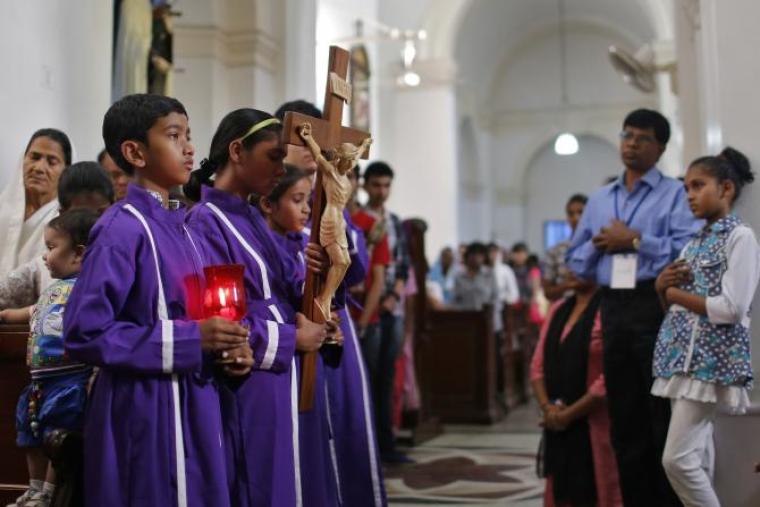 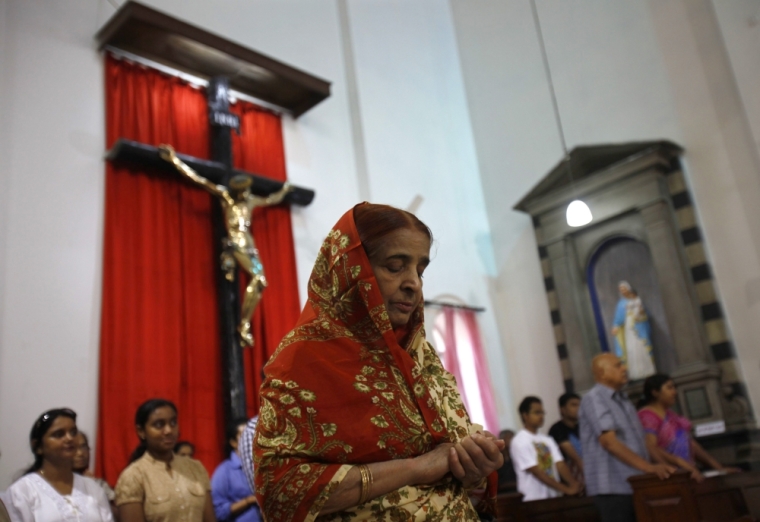 A woman attends a mass inside a church on Easter Day in New Delhi March 31, 2013. Holy Week is celebrated in many Christian traditions during the week before Easter. | (Photo: Reuters/Mansi Thapliyal)
View Photos

As the number of Christians in India continues to rise, there have been diverging opinions on whether the government of Prime Minister Narendra Modi is standing by as radical Hindus attack believers, or whether it is listening to their concerns and working alongside Christians to help the poor and the deprived.

Several reports in the past few years have highlighted the stories of Christians in villages across India who are being attacked by Hindu radicals for their faith, especially those who have recently converted to Christianity.

One such attack occurred in August in the village of Katholi where 29 Christians were tortured and beaten for refusing to deny their faith in Jesus Christ, which was reported by a number of persecution watchdog groups, including Open Doors.

Some organizations, such as Christian Aid Mission, a foreign mission board that assists native missionaries in carrying out their work helping believers who live in poverty or face persecution, argue that Modi's government coalition led by the Bharatiya Janata Party, which came to power in May 2014, has facilitated a Hindu nationalist atmosphere that encourages violence against Christians and fails to adequately punish those responsible.

The Evangelical Fellowship of India's Religious Liberty Commission said there were at least 134 reported attacks against followers of Christ in the first half of 2016 alone, compared with 147 in all of 2014 and 177 in 2015.

The Christian Post interviewed a ministry leader in India working with CAM who has accused Modi's government not only of failing to punish attackers, but also of opposing Christian missionaries and imposing tight restrictions when it comes to preaching.

The ministry leader, who chose to remain anonymous, told CP that such restrictions apply to all foreign Christian missionaries, though there are some exceptions for Nepali Christians who live or move around through the Tarai regions, because they have families and relatives on both sides.

He said Christians are "not perceived as favorable as others," by most Indian citizens.

"They only prefer the pure social works of the Christians. If the Gospel is attached or made part of it, they object and do anything to stop it," he added.

The ministry leader said the Christian population, which makes up an estimated 62.3 million people in the country, continues to grow despite ongoing persecution, due to the power of prayer.

"One prays, and supports a Gospel worker, who is sent out and God uses him or her and causes the growth," he said.

"Also we have witnessed more zeal and passion of the Gospel workers whom the Lord has been using. These workers are natives, to whom or through whom God's does His miracles."

Christian persecution watchdog group Open Doors has listed India at No. 17 on its World Watch List of countries where Christians are targeted for their faith, and noted that radical Hinduism has "increased steadily" under the government of Modi.

Open Doors explains: "While intolerance has risen, and minorities are constantly attacked, the central government has refused to speak out against the atrocities — thus further encouraging the radical Hindus to step up their actions."

Some prominent Christian leaders in India, such as Bishop Joseph D'souza, a human rights activist and the president of the All India Christian Council, who has been working to cultivate understanding between Christians and Hindus to fight poverty and injustice, has offered a different point of view, noting that he and other advocates have had opportunities to speak with the government and make the case for a path forward together.

D'souza told CP in a separate interview that he and over 700 national Christian leaders were present at an Oct. 14 meeting with Rajnath Singh, the home minister of India in New Delhi, where he made the point that Christians and Hindus have been friends for 2000 years, ever since Thomas the Apostle came to the country.

D'souza also said that "Indian Christians support and will work with the Modi government on the development of India and his many initiatives aimed at the poor, the deprived and women."

The bishop said that he told the home minister that Christians will continue to practice their faith, and directly requested the government to protect churches that are attacked by extremist groups.

At the same time, however, he conceded that there could be some instances of Christians exploiting or manipulating poor people and engaging in "forced and fraudulent conversions," and said the problem with a number of evangelical groups is "their language in evangelism which is derogatory of other faiths."

D'souza accused such groups of "serious non compliance of regulatory requirements on finance" and of making "triumphalist statements about the whole of India turning to Christ," none of which help their visa renewal applications.

He revealed that the home minister assured the Christian leaders publicly that the government "will protect us from any attacks by fringe groups." What is more, there was recognition that some radical groups feel like they can take the law in their own hands due to Modi's government coming to power.

"To the home minister's credit, every time I have reached him on behalf of the Christian Council he has responded to our request. He assured us that religious freedom will continue in India," D'Souza said.

The All India Christian Council president insisted that "if and when" Christian leaders do see the government launch a frontal attack on religious freedom, they will speak out.

"Right now, like the early Church, we must be in conversation with those who do not understand what God is doing in India and why Jesus and the Church is good for the nation," he explained.

D'souza concluded by expressing his optimism that there is a "genuine God breathed revival going on in India across all castes and groups."

"There are signs and wonders and miracles and visions. This is God blessing India and reaching out to the poor and needy," he said.