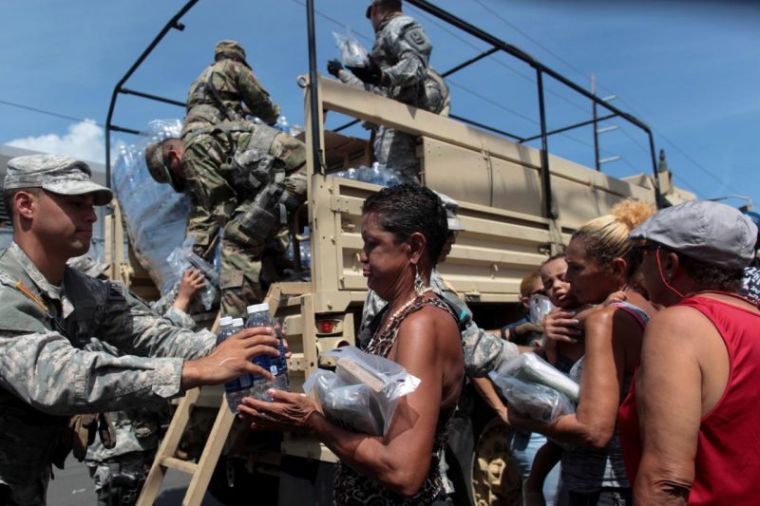 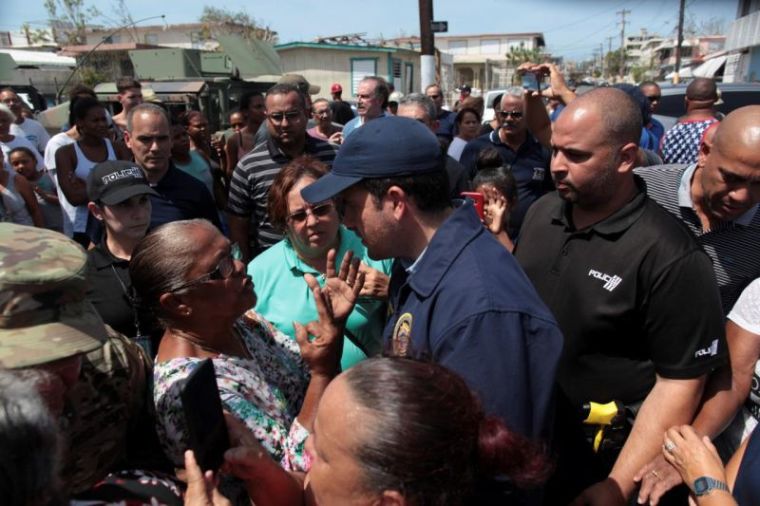 Puerto Rico's Governor Ricardo Rossello (C) talks to a woman during a distribution of relief items, after the area was hit by Hurricane Maria in San Juan, Puerto Rico, September 24, 2017. | (Photo: Reuters/Alvin Baez) 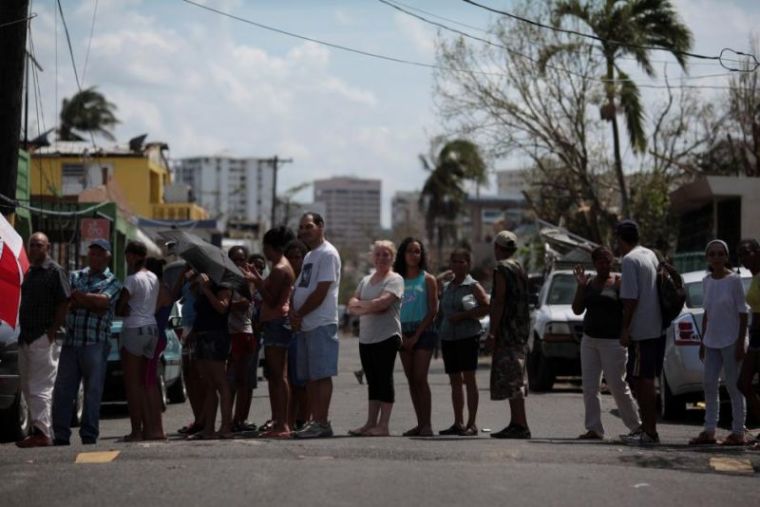 People stand in line for relief items to be distributed, after the area was hit by Hurricane Maria in San Juan, Puerto Rico, September 24, 2017. | (Photo: Reuters/Alvin Baez) 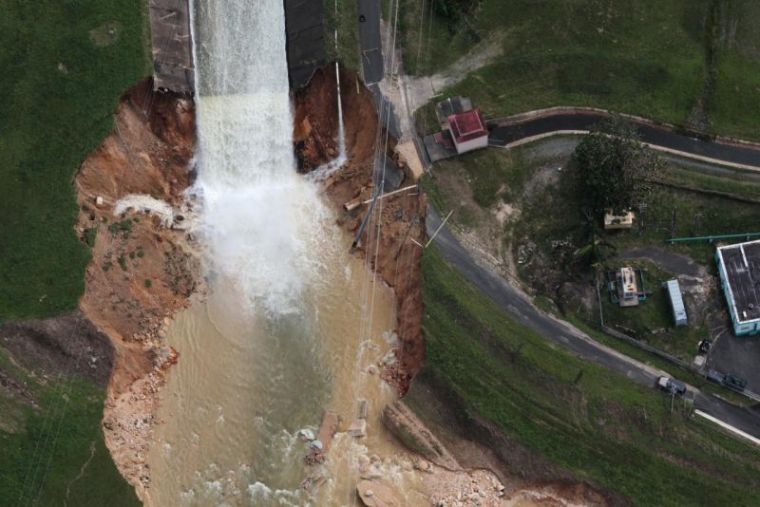 An aerial view shows the damage to the Guajataca dam in the aftermath of Hurricane Maria, in Quebradillas, Puerto Rico, September 23, 2017. | (Photo: Reuters/Alvin Baez) 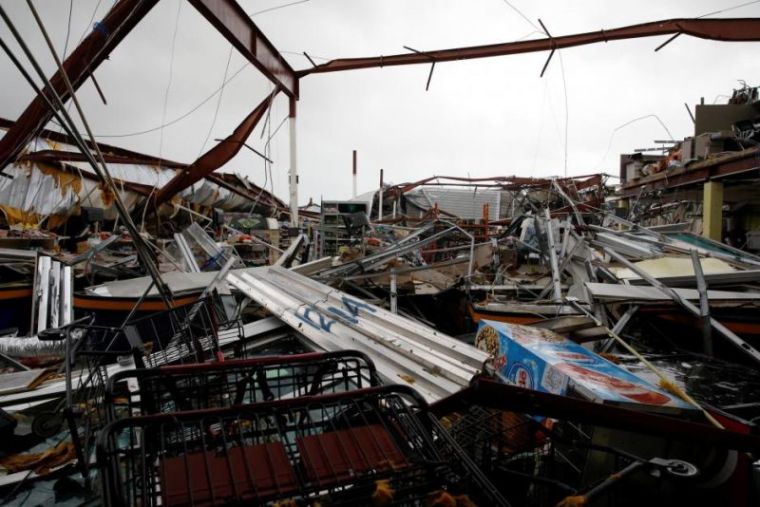 Damages are seen in a supermarket after the area was hit by Hurricane Maria in Guayama, Puerto Rico, September 20, 2017. | (Photo: REUTERS/Carlos Garcia Rawlins)
View Photos

Churches are an essential part of the recovery process for Puerto Rico and Mexico, say representatives from the National Hispanic Christian Leadership Conference and Convoy of Hope regarding reconstruction efforts in the two countries following this month's earthquakes and Hurricane Maria.

On a teleconference held Wednesday afternoon, NHCLC President, the Rev. Samuel Rodriguez, spoke about the launch of a charity effort called "Puerto Rico and Mexico Rise Up," which seeks to equip churches to help communities in Mexico and Puerto Rico recover from the recent natural disasters.

In an interview with The Christian Post, Rodriguez explained that the newly launched campaign was working through churches because they are an important channel for relief.

"We believe these are the institutions ordained by God to bring Good News to the poor and to quench the thirsty and feed the hungry."

Convoy of Hope spokesperson Jeff Nene, who was also on the call to describe some of his group's experiences on the ground in Puerto Rico, agreed about the essential value of local congregations in helping relief efforts.

"We have found that the local church is the best source for volunteers. They can marshal a team together on a moment's notice," said Nene to CP.

"And what that allows us to do is come in with a very small team from Convoy of Hope, like in Puerto Rico right now we have four people, and in Mexico we have two that are arriving today, and they're there to give guidance and direction and organization. But the local church does the work."

Rodriguez's and Nene's comments came as part of a teleconference call in which they provided updates on the relief efforts in Mexico City and Puerto Rico.

On Sept. 19, Mexico City experienced a severe earthquake that has thus far resulted in hundreds of deaths and caused dozens of buildings to collapse.

"Nearly 4,000 buildings were damaged by the quake, and residents of high-rises wonder if their buildings may fall before they can make their way downstairs," The New York Times reported on Monday.

"And over the weekend, the trauma of last Tuesday was brought to the surface again as light tremors from an earthquake in southern Mexico on Saturday lightly rocked the capital, sending residents fleeing into the streets barefoot and in sleepwear."

Around the same time as the Mexico earthquake, Hurricane Maria struck the island of Puerto Rico, resulting in widespread destruction and power outages.

"About 97 percent of the island's 3.4 million residents are still in the dark Wednesday," CNN reported on Wednesday. "About half of the residents do not have running water."

Nene told those on the call about the things that Convoy of Hope was doing in Puerto Rico, having just returned from the island, where a team arrived on Monday.

"They already started on pulling together warehousing. They've already purchased 20,000 pounds of rice, have another 20,000 pounds coming. Tomorrow we have a C-130 full of supplies that's going to be landing and also another private plane with supplies and people," explained Nene.

"And then on top of that, three containers that will be leaving via ship this week to head down there will be there in just a couple of weeks. So we've got a great head start in Puerto Rico already."

When asked by CP about any cooperation with the Trump administration, Rodriguez responded that he had gotten "very significant reports" from the White House about the number of federal first responders and FEMA workers on the ground.

"I'm grateful for the Trump administration as it pertains to helping the island recover. They have had some logistical issues. That's how horrific this has been — that our federal government has had issues even in distribution and other areas," Rodriguez added.

"I have received very good cooperation from this administration in addressing the concerns and needs. And they likewise stand committed to working with the faith community in Puerto Rico for rebuilding Puerto Rico."