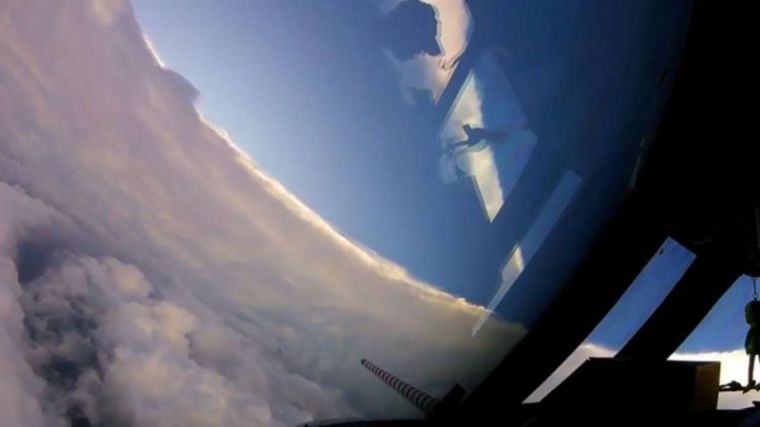 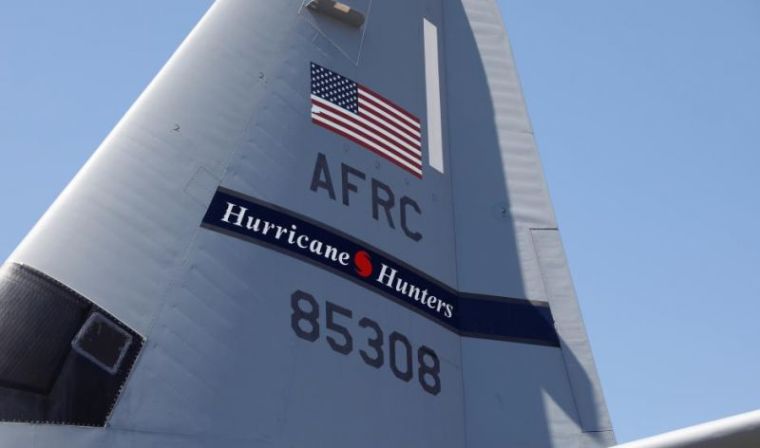 A tail of the WC-130J Super Hercules from the Air Force's 53rd Weather Reconnaissance Squadron bears the name "Hurricane Hunters" as the plane awaits its departure from Keesler Air Force Base in Biloxi, Mississippi, to fly into the eye of Hurricane Irma off the coast of southern Florida, U.S., September 8, 2017. | (Photo: Reuters/Kevin Lamarque) 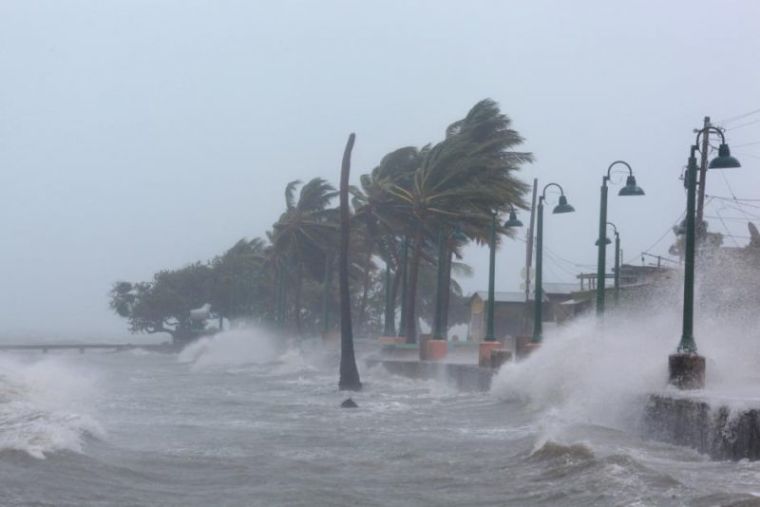 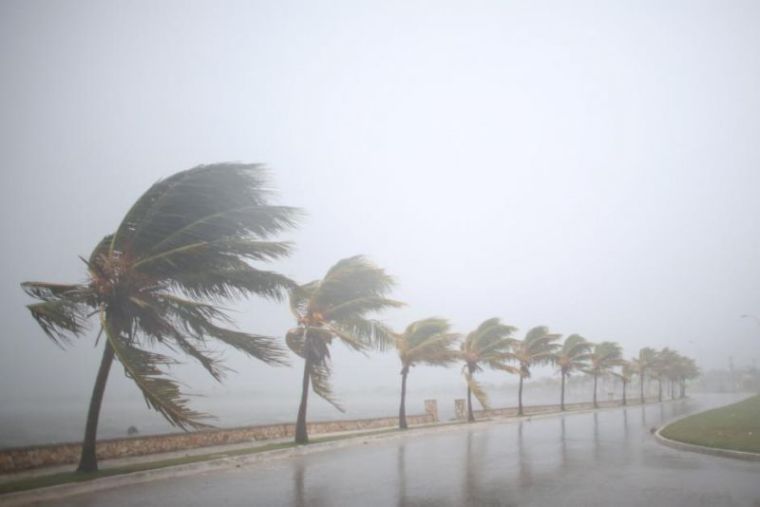 Palm trees sway in the wind prior to the arrival of the Hurricane Irma in Caibarien, Cuba, September 8, 2017. | (Photo: Reuters/Alexandre Meneghini) 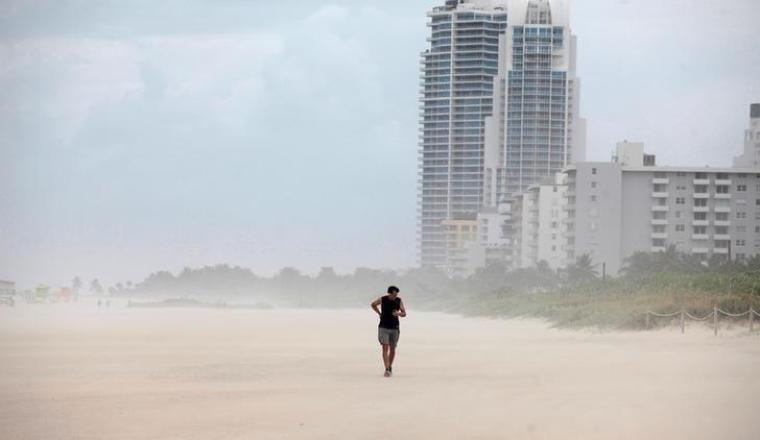 A person walks along the beach prior to the arrival of Hurricane Matthew in Miami Beach, Florida, U.S. October 6, 2016. | (Photo: Reuters/Javier Galeano)
View Photos

THE EYE OF HURRICANE IRMA — The sky darkened, lightning flashed and a jolt of turbulence shook the cabin of the hulking Air Force turbo-prop aircraft as it plied its way toward the eye of Hurricane Irma, one of the strongest Atlantic storms ever recorded.

Piloting the four-engine, WC-130J aircraft was Air Force Reserve Lieutenant Colonel Jim Hitterman, who over the past 22 years has flown into 40 to 50 hurricanes.

Every storm is different but he likens the experience to driving through a car wash — with one big difference.

"As you're driving through that car wash, a bunch of gorillas start jumping on top of your car," Hitterman said, adding that sometimes shaking gets so bad, he cannot see his instruments.

On Friday and Saturday, Reuters accompanied the Air Force Reserves' "Hurricane Hunters," whose hard-won data taken directly from the center of storms like Hurricane Irma are critical to U.S. forecasts that save lives.

"We can estimate by satellite what the strength and size of a hurricane is. But only if you go into the hurricane can you really get an accurate measure of its exact center location, the structure, the maximum winds," said Rick Knabb, a hurricane expert at the Weather Channel and a former director the National Hurricane Center.

The 53rd Weather Reconnaissance Squadron's "Hurricane Hunters" are based at Keesler Air Force Base in Biloxi, Mississippi. Its members trace the origin of hurricane hunting to a 1943 barroom dare by two then-Army Air Corps pilots to fly through a hurricane off Texas.

Today, the missions are carried out largely by Air Force reservists who, after a few days or weeks of chasing storms, return to their jobs in the civilian world.

Hitterman, 49, flies for Delta Airlines most of the time and, as a hobby, races motorcycles.

The flight meteorologist, Major Nicole Mitchell, is an experienced television news meteorologist and mother of an 8-month-old baby boy. She normally lives in Minnesota.

"It's a fact that we make a difference," she said.

Mitchell's plane would make four passes in total through Irma's eye during that mission, some entries and exits more turbulent than others. Its final pass came on Saturday, as Hurricane Irma walloped Cuba's northern coast.

Irma's interaction with Cuba's terrain weakened the storm from a Category 5 to a Category 4 hurricane but U.S. National Hurricane Center warned the storm was anticipated to strengthen again.

Irma was expected to hit Florida on Sunday morning, bringing massive damage from wind and flooding to America's fourth-largest state by population. Millions of Florida residents have been ordered to evacuate.

Despite the severity of storms like Irma and the undeniable danger on the ground, these U.S. flights into hurricanes have an incredible safety record — not one aircraft has been lost in more than four decades. The last time was in 1974.

But they are not without risk. Some six hurricane or typhoon hunting aircraft have been lost in total, costing 53 lives, according to the Weather Underground website.

Jeff Masters, director of meteorology of The Weather Underground, recalled an extremely close call during a flight into Hurricane Hugo in 1989 organized by the National Oceanic and Atmospheric Administration (NOAA), which also fields its own turbo-prop aircraft.

The pilot lost control of the aircraft, one of the engines caught on fire, and the aircraft descended rapidly, all because satellite data had given his crew the sense they were flying into a Category 3 storm. It turned out to be a Category 5.

They were flying much too low for a storm that potent.

"We went in at 1,500 feet, which is a no-no in a Category 5 and we got clobbered," recounted Masters. The pilot was able to recover control after entering Hugo's eye.

But then, suddenly, everything in the plane settled down.

It was safe enough to take off seat belts. The flying was smooth.

Inside the eye, the sky opened up. The dark "eyewall" — the surrounding ring of clouds — could be seen outside the cockpit window.

Masters says someday drones might be able to do the risky job now done by experienced air crews.

But, from the cockpit of this Hurricane Hunter flight, that possibility still seems distant.

This aircraft, like all of the 53rd's 10 WC-130J planes, are specially equipped to gather meteorological data and send it to the U.S. National Hurricane Center. Some of that equipment is operated manually.

That includes releasing sensors through the belly of the aircraft that, as they fall, transmit storm data including Irma's pressure, wind speed and direction.

As the mission got underway, the sensors - known as dropsondes — appeared to be malfunctioning.

Technical Sergeant Karen Moore, the loadmaster who releases the dropsondes from the aircraft, among many other duties, said she could not get its GPS signal as it fell into Irma's winds.

So, Moore took out a screwdriver and literally started fixing them on the fly, one by one. That is something a drone would not be able to do.

Hitterman said he also could see a future where pilotless planes fly into hurricanes to get the data Americans need.