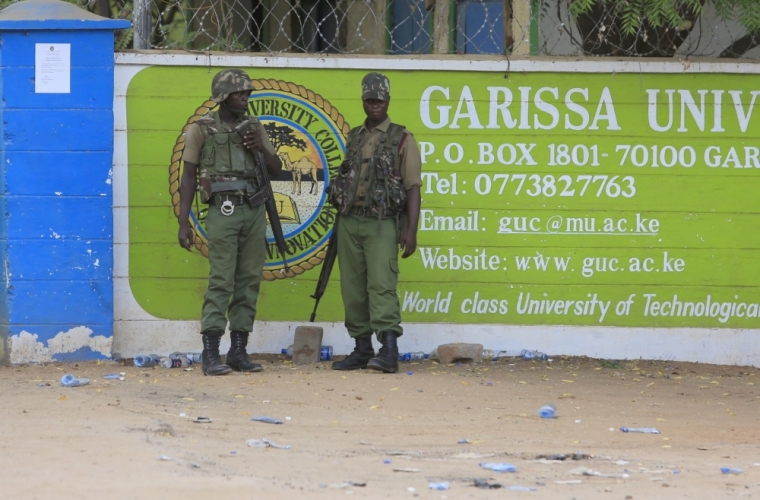 Kenya Administration policemen stand in front of Garissa University College in Garissa April 4, 2015. The death toll in an assault by Somali militants on Garissa University College is likely to climb above 147, a government source and media said on Friday, as anger grew among local residents over what they say as a government failure to prevent bloodshed. | (Photo: Reuters/Noor Khamis) 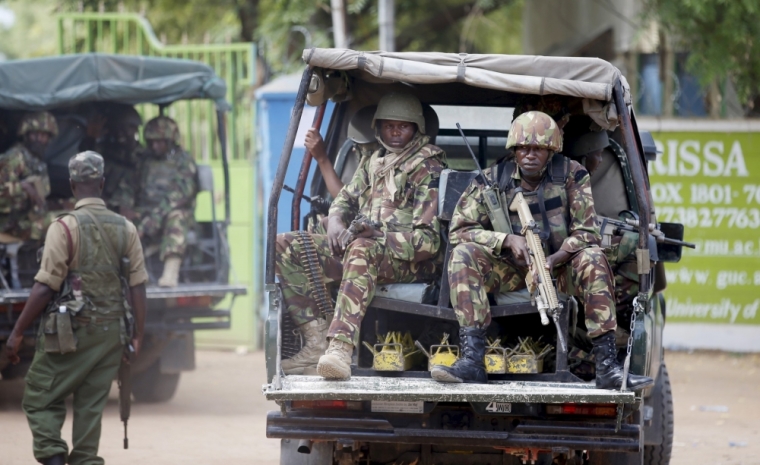 Kenya Defence Force soldiers arrive in Garissa University College in Garissa, April 4, 2015. The death toll in an assault by Somali militants on Garissa University College is likely to climb above 147, a government source and media said on Friday, as anger grew among local residents over what they say as a government failure to prevent bloodshed. | (Photo: Reuters/Goran Tomasevic) 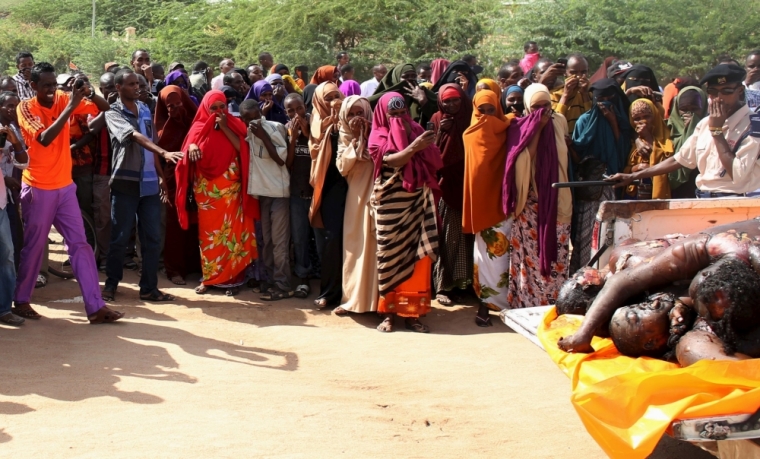 A crowd looks at bodies of suspected Garissa University College attackers in a school compound in Garissa, April 4, 2015. The death toll in an assault by Somali militants on Garissa University College is likely to climb above 147, a government source and media said on Friday, as anger grew among local residents over what they say as a government failure to prevent bloodshed. | (Photo: Reuters/Goran Tomasevic) 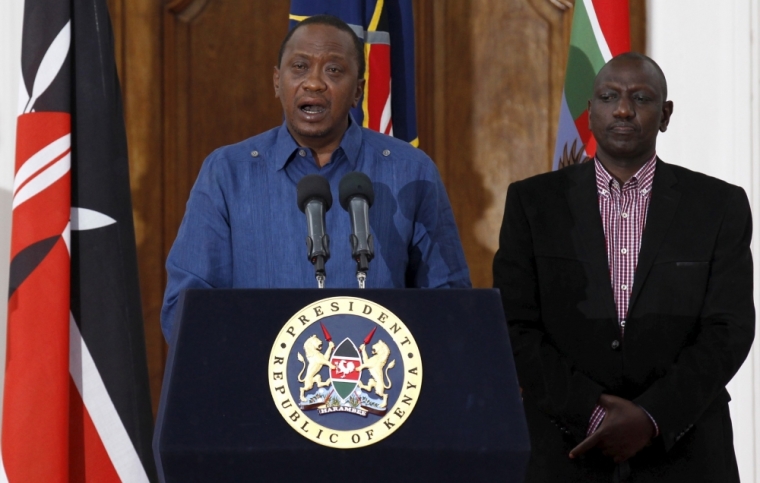 Kenyan President Uhuru Kenyatta (L), flanked by his Deputy William Ruto, addresses a news conference at the State House in the capital Nairobi, April 4, 2015. Kenyatta said on Saturday that those behind an attack in which al-Shabaab Islamist militants killed 148 people at a university were "deeply embedded" in Kenya, and called on Kenyan Muslims to help prevent radicalization. | (Photo: Reuters/Thomas Mukoya) 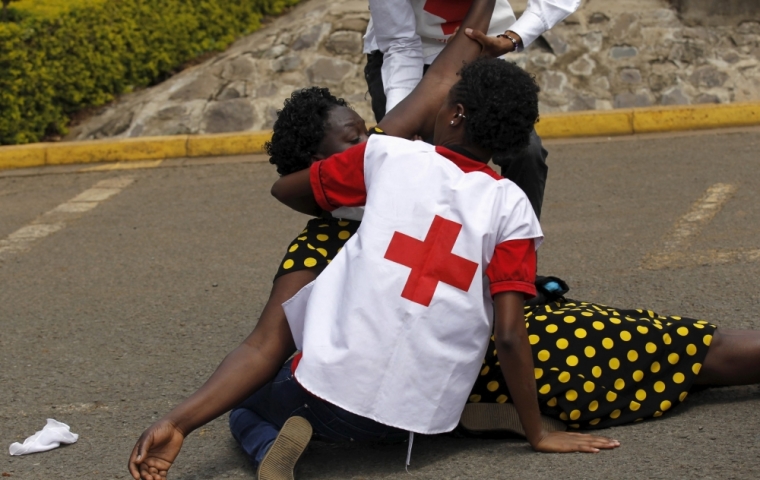 A relative falls while she is assisted by Kenya Red Cross staff where bodies of the students killed in Thursday's attack by gunmen, are preserved at the Chiromo Mortuary in the capital Nairobi, April 4, 2015. Somali militants vowed on Saturday to wage a long war against Kenya and run its cities "red with blood" after the group's fighters killed nearly 150 people during an assault on a Kenyan university. | (Photo: Reuters/Thomas Mukoya)
View Photos

A police source has said that despite the alarm sounding last week of the massacre taking place at Garissa University College in Kenya, where close to 150 Christian students were killed, authorities took hours to respond, and ever arrived at the scene after politicians and journalists.

The source, who wasn't named, told CNN on Monday that the government's rapid response team was held up in the capital of Nairobi for hours, apparently arranging for transport, before it finally made its way to Garissa.

The authorities arrived even after some politicians and Nairobi-based journalists, but were able to gun down the four terrorists carrying out the slaughter 10 hours after the attack began.

Terror group al-Shabaab has taken responsibility for the attack, where the gunmen reportedly separated Christian students from Muslim students before killing the Christians.

Some, such as Kenyan activist Boniface Mwangi, blamed corruption among the security forces for allowing al-Shabaab to carry out such attacks.

"Entrenched corruption in the security system allows al-Shabaab to move freely in and out of Kenya and carry out such attacks with ease," Mwangi said in a statement online.

Manoa Esipisu, a spokesman for Kenya's president and deputy president, said, however, that the authorities did all that they can.

"With the benefit of hindsight you can always say things could have been done better," Esipisu said, and argued that Kenyan authorities saved a lot of students and "got the job done."

The government has meanwhile identified radical Islamic jihadist Mohamed Mohamud as the mastermind behind the Garissa attack, and posted a reward of 20 million Kenyan shillings, or close to $215,000, for his capture.

Mohamud, a senior leader in al-Shabaab, is "credited with having an extensive terrorist network within Kenya," according to a Kenyan ministry document shared by CNN.

The militant has been accused of leading external operations against Kenya, and has been identified as the regional commander within al-Shabaab in charge of the Juba region.

Separately, investigators revealed that one of the attackers killed on Thursday was Abdirahim Mohammed Abdullahi, the law-school-educated son of a Kenyan government official who had been reported missing in 2014.

Kenyan President Uhuru Kenyatta warned that his administration will "respond in the severest ways possible" to the slaughter, and will "fight terrorism to the end."

The country's "security forces are pursuing the remaining accomplices. We will bring all of them to justice. … We are also in active pursuit of the mastermind and have placed a reward for his capture," he added.

Christians in Kenya and around the world have been mourning the slain students, and honored them in their Easter prayers.

Archbishop of Canterbury Justin Welby, the leader of the Anglican Communion, said in his Easter message: "There have been so many martyrs in the last year. On Maundy Thursday, three days ago, around 150 Kenyans were killed because of being Christian. They are witnesses, unwilling, unjustly, wickedly, and they are martyrs in both senses of the word."