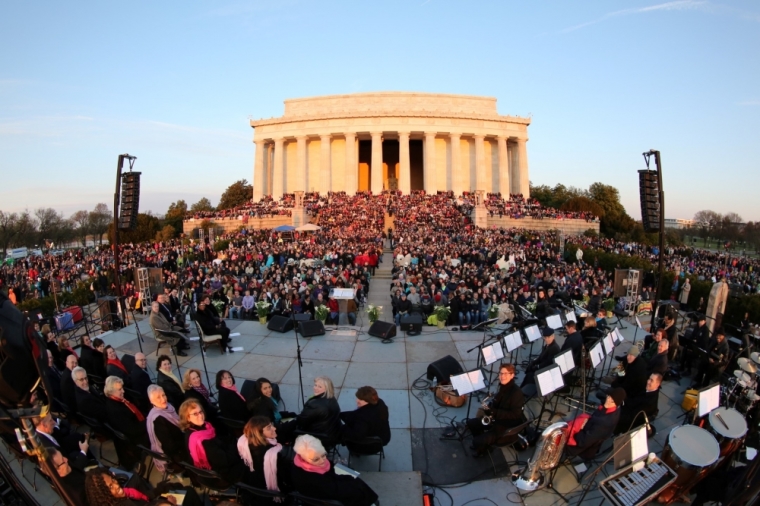 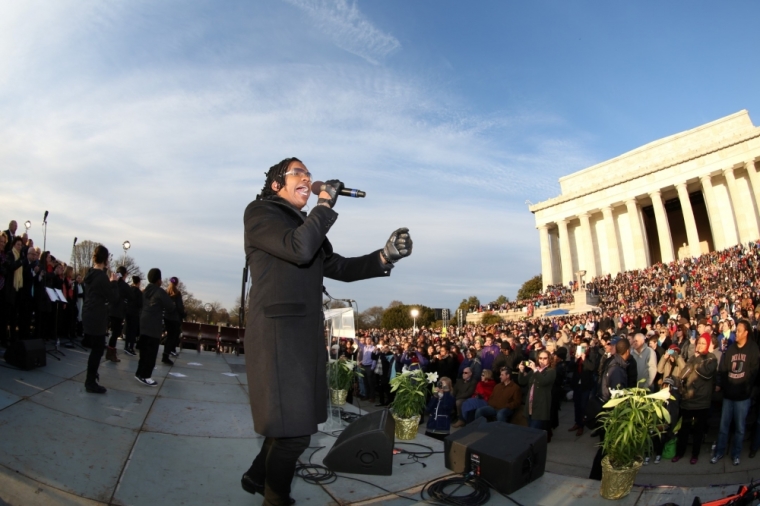 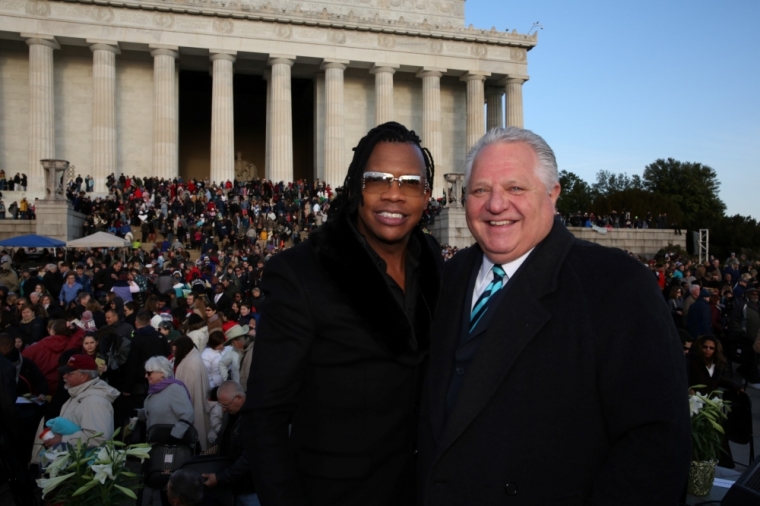 Approximately 7,000 worshiping Christians gathered on the steps of the Lincoln Memorial on Easter morning to celebrate the resurrection of Jesus Christ at the 37th-annual Easter sunrise service, which featured Newsboys lead singer Michael Tait and the song "We Believe."

The event was hosted and organized by Capital Church, an interdenominational congregation in the Washington suburb of Vienna, Virginia. The service began at 6:30 a.m. and the hour-and-a-half music-filled ceremony featured not only Tait but a choir, orchestra, band and a brief sermon from the congregation's lead pastor Amos Dodge.

"Washington, D.C. is arguably the one most influential cities in the world and I do believe it is important in the heart of the most influential city of the world to declare on Easter morning our faith in the risen Lord," Dodge told The Christian Post. "I think it is important to reclaim some of our own spiritual heritage and we do that from the steps of the Lincoln Memorial and declare our faith and trust in Jesus Christ, who died and rose again."

In his 15-minute sermon, Dodge told the crowd that Easter is about celebrating the certainty in knowing that not only did Jesus die for our sins but he also rose again from His death, which no other religion can claim to be true about their Messiah or messenger.

"Christianity is unique in that we know that Muhammad may have said some wonderful things and done some wonderful things, but he is in a tomb. Confucius was noted for wise sayings but nobody has heard from him in a long, long time," Dodge declared. "When you compare the claims of Jesus Christ to all the religions in the world, no other religion has a risen savior, the one who came back from the dead."

"You can trust a man who died for you," Dodge continued. "Jesus died for us and then came back from the grave."

Going into the morning, Dodge expected to have a larger crowd than any of the previous 37 Easter services held at the Lincoln Memorial because of Tait's expected performance.

"The Lincoln Memorial is just eight blocks from where I grew up," the 48-year-old Tait said in a press release. "To be there at sunrise on Easter, singing 'We Believe'… it's going to be incredible!"

Dodge added that Tait was not invited solely because he's a member of a world-famous Christian rock band who could draw a crowd. Dodge said Tait was invite because of the special Easter message that he wanted to share through his song.

"We don't have musical guests or any guests just to draw crowds, we have them, especially musical guests, because they have something to sing that says and declares the power of the resurrection," Dodge told CP. "This song, 'We Believe,' that Newsboys are singing now is just incredible."

"I was walking on the mall on a spring day in 1979 and I went past the Lincoln reflecting pool and I thought, what a great place for a sunrise service," Dodge said. "I thought it was a thought, now I know it was a whisper of the Holy Spirit. I made some arrangements with the park service and got the permits and that first Sunday we had about 150 perhaps."

Although the sunrise service is now enjoyed every year by thousands of Christians from all 50 states, the service requires the dedication and sacrifice of many of the Capital Church congregation members, who work all Easter weekend long to set up for the service.

"Our entire congregation is mobilized to do this service. So basically, our church gives up [leisurely] going to worship on Easter morning," Dodge explained. "Basically, our church becomes servants to our city, to the nation and to the world to present the service to celebrate Christ's love and power and grace and forgiveness and mercy. We're all involved and heavily engaged in making it happen." 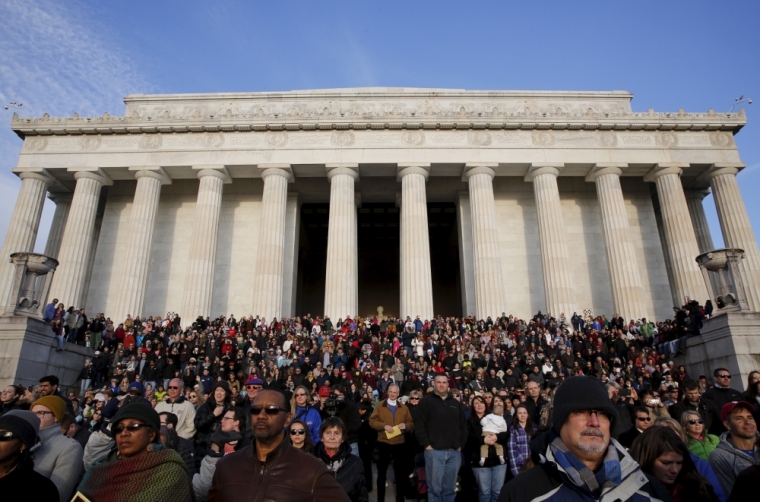 Participants in an Easter Sunday sunrise Christian religious service stand on the steps of the Lincoln Memorial in Washington, April 5, 2015. Organizers said a record crowd estimated at 8,900 attended the annual service in its 37th year. | (Photo: Reuters/Jim Bourg) 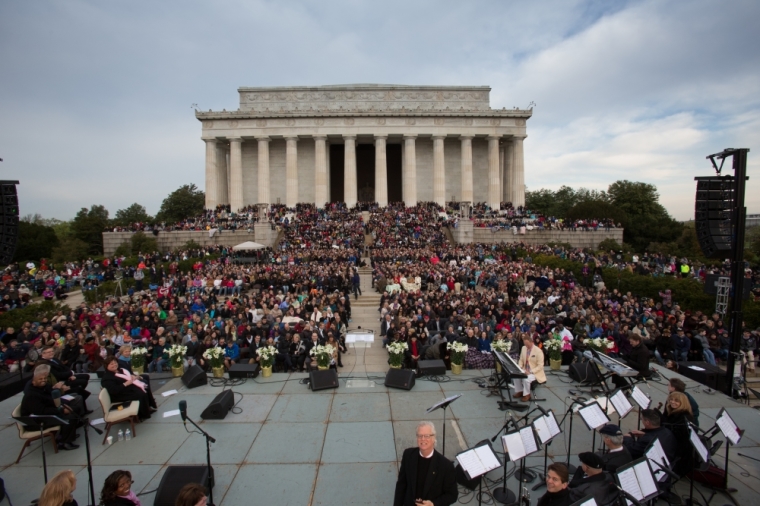 Thousands of worshipers gather to celebrate the resurrection of Jesus Christ at the 2014 Lincoln Memorial Easter sunrise service in Washington, D.C., which is hosted every year by Capital Church of Vienna, Virginia. | (Photo: Capital Church) 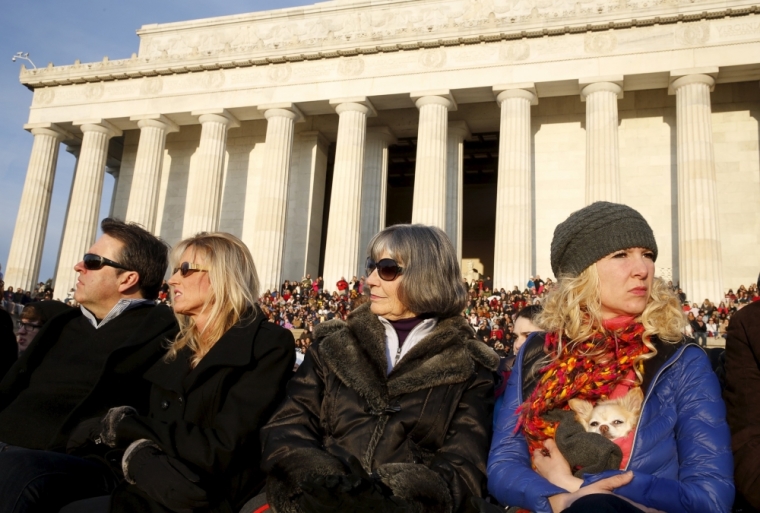 Participants in an Easter Sunday sunrise Christian religious service sit on the steps of the Lincoln Memorial in Washington, April 5, 2015. Organizers said a record crowd estimated at 8,900 attended the annual service in its 37th year. | (Photo: Reuters/Jim Bourg)
View Photos