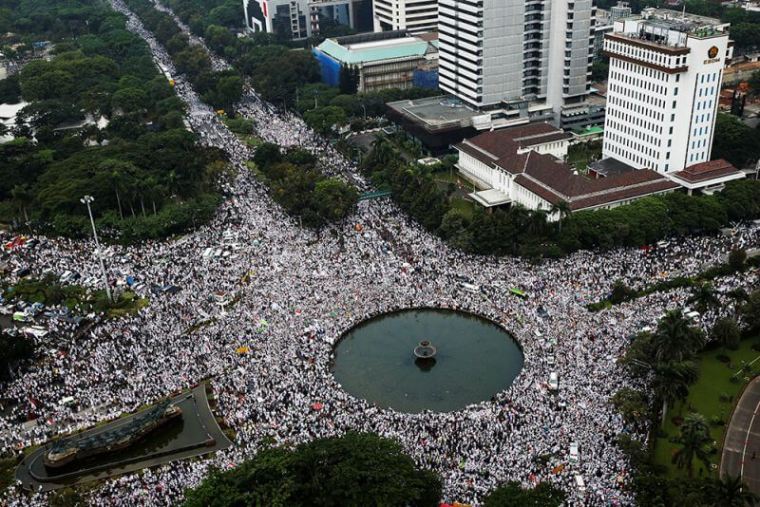 An aerial view shows members of hardline Muslim groups attending a protest against Jakarta's incumbent governor. The protesters, led by a group called the Islamic Defenders Front, chanted "God is greatest" and waved placards calling for Purnama, popularly known as Ahok, to be jailed for blasphemy. | (Photo: Reuters/Beawiharta) 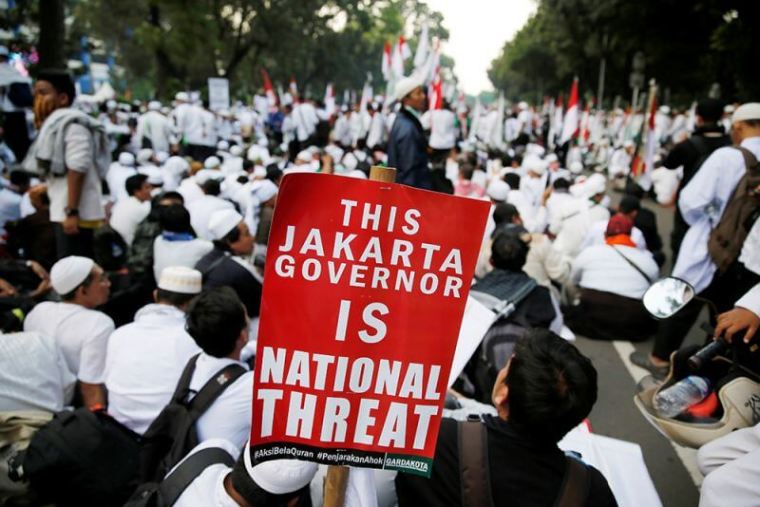 Members of hardline Muslim groups attend a protest against Jakarta's incumbent governor. Indonesia is the world's most populous Muslim country, where many people follow a moderate form of Islam. While hardliners have launched occasional agitation in the past, protests on such a large scale have been rare. | (Photo: Reuters/Beawiharta) 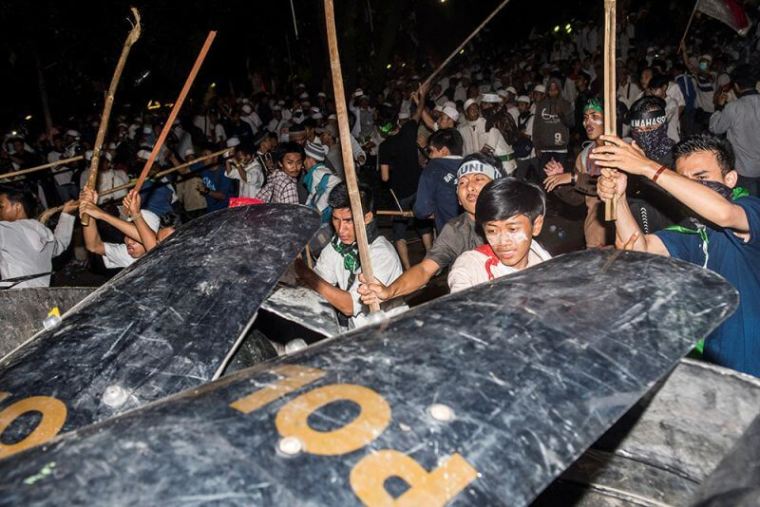 Jakarta's Christian governor was interrogated by police on Monday after tens of thousands of angry Muslims took to the streets on Friday to demand that he be jailed for allegedly insulting Islam's holy book, the Quran.

Basuki Tjahaja Purnama, the first Christian in over 50 years to be elected governor of the world's most populous Muslim nation's capital, spent nearly nine hours being questioned by authorities after thousands of Muslim demonstrators filled city streets to accuse the governor of committing the criminal offense of blasphemy.

The accusation stems from comments that Purnama, who is commonly known as "Ahok," made during a trip to the Thousand Islands in September, where he said the Quran is lying to Muslims when it tells them they can't vote for non-Muslims.

After Purnama's comment made its rounds on social media, Muslim radicals were quick to accuse the Protestant governor of blasphemy and call for him to pull out of the hotly contested 2017 election.

Although he has apologized for his remarks and said that he did not mean to offend anyone, he has refused to drop his re-election bid.

The Sydney Morning Herald reports that protests against the governor were largely peaceful during the day. But the demonstrations turned violent at night after clashes between police and demonstrators forced police to use tear gas to disperse the demonstrators.

Reports indicate that several people were injured, while one person died as a result of an asthma attack that occurred after police fired tear gas into the crowd. As many as 100,000 people participated in the protest, while as many as 12 police officers were injured.

Some protesters called for authorities to "Hang Ahok, hang the traitor," while others chanted "Cut off a hand and foot and deport him," The New York Times reports.

As blasphemy is punishable by up to five years imprisonment in Indonesia, Purnama, who is part of the ethnic Chinese minority, responded to the police summons on Monday. His lawyer, Sirra Prayuna, told media after almost nine hours of questioning that his client answered 22 questions from National Police agents. Monday's questioning of Purnama comes after he was previously interrogated on Oct. 24.

"Pak Ahok answered the questions readily," Sirra said, according to the Jakarta Post.

After the extensive questioning, the governor offered little comment to the media about his case.

"If you want to ask another question, just ask the police," Ahok was quoted as saying. "I want to go home. I'm hungry."

The protest and questioning comes as Ahok is in the midst of a three-way gubernatorial election. According to Sky News, National Police spokesman Boy Amar said the police were investigating the claims of Indonesian President Joko Widodo, who said "political actors" were behind the violence of Friday's protest.

"I really regretted the unruly situation later in the evening because the public who were supposed to disperse themselves turned violent," Widodo said, according to Jakarta Post. "Political actors are taking advantage of the situation."

Because of the riots, Widodo was forced to postpone his official visit to Australia that was scheduled for last weekend.

This is not the first time that Purnama has faced protests. After he was elected in 2014 and before he was sworn in, he faced protests over the fact that he is a Christian. Radical Muslims even threatened to storm into his office, The New York Times reports.

According to Open Doors USA's World Watch List, Indonesia ranks as the 43rd worst country in the world when it comes to the persecution of Christians. Muslims make up over 87 percent of the country's population, while Christians make up about 8.8 percent of the total population.