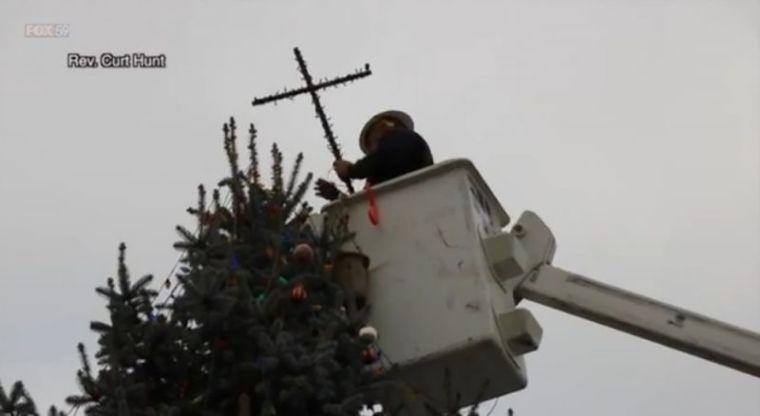 A city employee removes a cross from atop a Christmas tree in Knightstown, Indiana, on December 12, 2016. | (Photo: Screencap/Fox59) 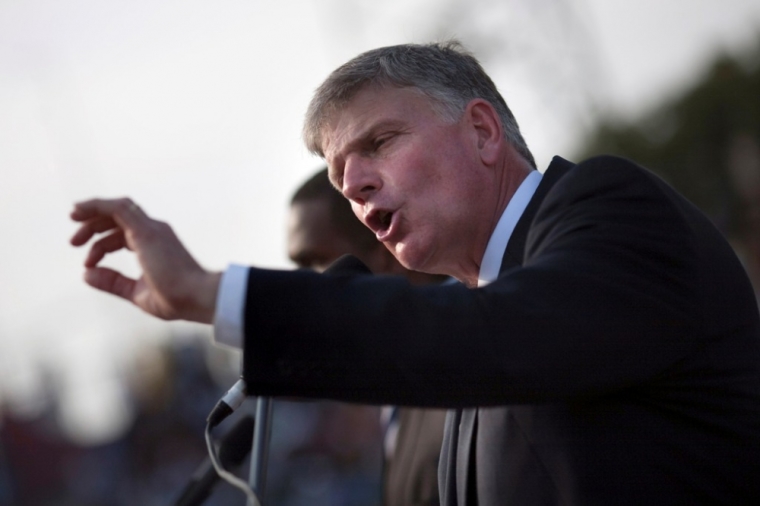 Evangelist Franklin Graham is decrying the ACLU's lawsuit against a small Indiana town for putting a cross atop a Christmas tree on government property as part of an ongoing "war on Christmas."

The state chapter of the ACLU recently filed the lawsuit on behalf of Knightstown, Indiana, resident Joseph Tompkins, who objected to seeing the cross as he drove through town. Knightstown, which is about 40 miles east of Indianapolis and has a population of approximately 2,200 people, has placed an illuminated crucifix at the top of the Christmas tree in their town square for years but had never before received any complaints.

"The war on Christmas is still on!" said Graham in a post on his Facebook page on Monday. "Because of one person's 'objection,' the ACLU is suing an Indiana town for having a lit cross atop their Christmas tree just as they have had for years."

CBS News reported on Sunday that the lawsuit documents state that each day, Tompkins "is forced to come into direct and unwelcome contact" with the cross on top of the Christmas tree and that it has caused him "irreparable harm." Such an offense can only be addressed adequately by removing the cross and paying Tompkins monetary damages, the suit argues.

"Give me a break. We shouldn't really be surprised by this," Graham continued. "The Bible says Jesus Christ would be a 'stone of stumbling, and a rock of offense' to many. 'For the message of the cross is foolishness to those who are perishing, but to us who are being saved it is the power of God,' (1 Cor. 1:18)."

"I hope this town will stand strong and not let one man's objection override their celebration of the true meaning of Christmas. The ACLU wants to remove God from everything — our Constitution doesn't require that. Jesus Christ came to Earth to pay the penalty of sin for mankind on the cross. That's what CHRISTmas is all about!" he concluded.

Local news reports indicate that Graham's words have come too late as town officials decided to remove the cross on Monday and do not plan to reverse course.

"We could not win the court case brought by the ACLU. We would have been required to pay the legal fees of the ACLU lawyer and monetary damage to the plaintiff, Mr. Joseph Tompkins, as set by the court. This is our statement based on advice from our legal counsel."

Ken Faulk, legal director of ACLU-Indiana, said in a statement: "We can put crosses in our yards, we can have creches in our yards. But obviously governments cannot do that. That's why we have an Establishment Clause."

"The cross is not a Christmas symbol. The cross is the preeminent symbol of Christianity and it reminds Christians not of the secular trappings of Christmas, but of the crucifixion and the resurrection of Jesus," he added.