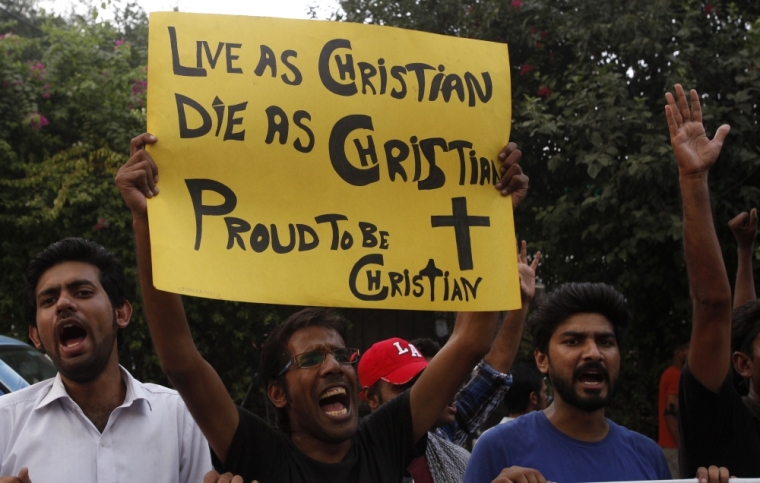 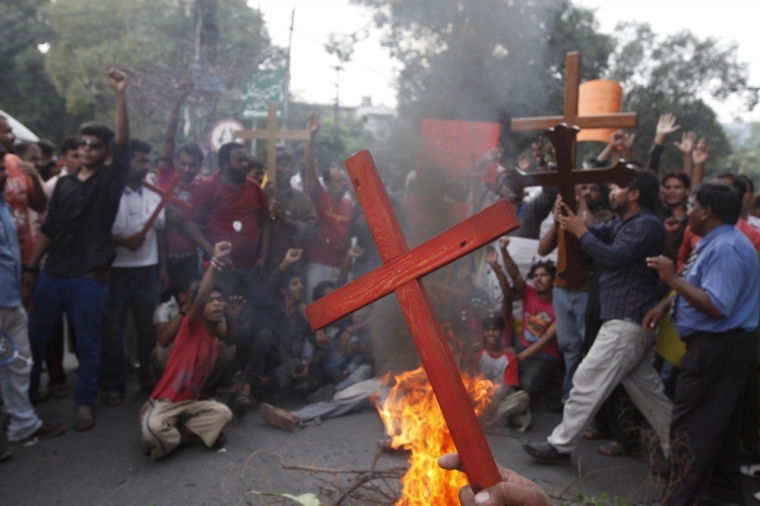 Members of the Pakistani Christian community hold crosses in front of a fire during a protest rally to condemn Sunday's suicide attack in Peshawar on a church, with others in Lahore September 23, 2013. A pair of suicide bombers blew themselves up outside the 130-year-old Anglican church in Pakistan after Sunday mass, killing at least 78 people in the deadliest attack on Christians in the predominantly Muslim country. | (Photo: Reuters/Mohsin Raza) 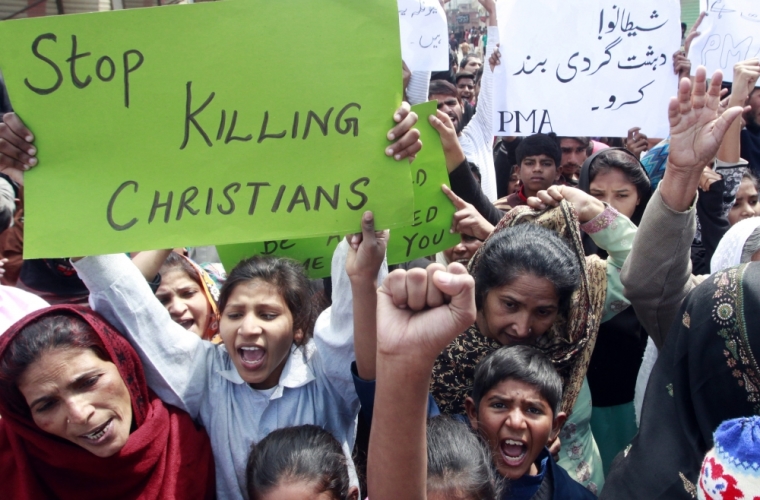 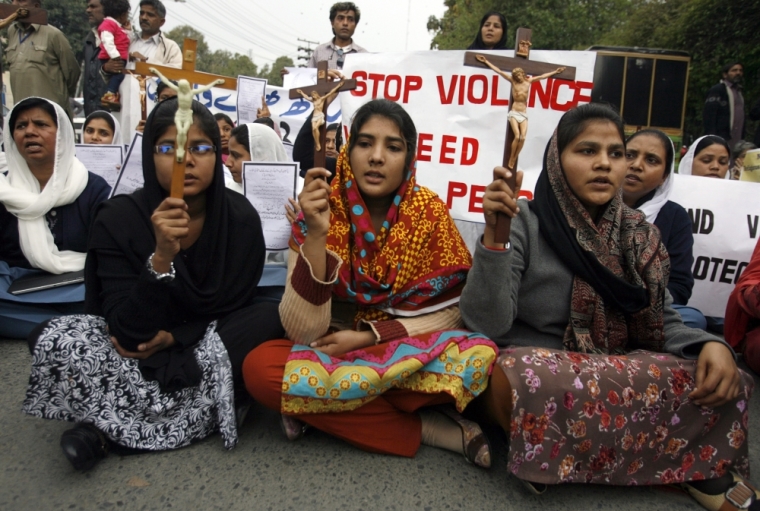 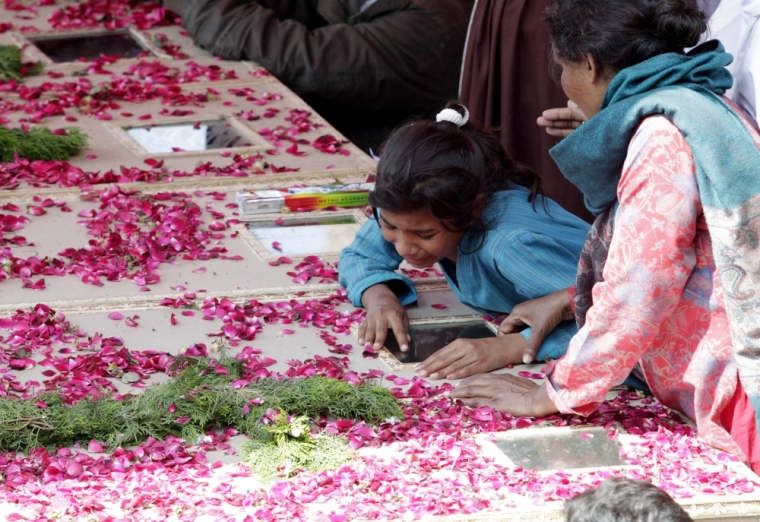 A girl from the Christian community mourns over the coffin of her brother, who was one of the victims killed by a suicide attack on a church, during his funeral in Lahore, Pakistan, March 17, 2015. Suicide bombings outside two churches in Lahore killed 14 people and wounded nearly 80 others during services on Sunday in attacks claimed by a faction of the Pakistani Taliban. | (Photo: Reuters/Mohsin Raza)
View Photos

A mob of radicals in the capital city of Pakistan torched the home of a Christian family and attempted to burn them alive by locking them inside before setting it on fire, a Christian aid group is reporting.

Earlier this month, a large group of radicals in Islamabad arrived at the home of 38-year-old Christian Boota Masih and began banging on the door, shouting for him to come outside.

Masih told the British Pakistani Christian Association that when he answered the door, the mob's leader demanded that he and his family either give up their home, leaving all of their belongings behind, or suffer the consequences.

Masih believes that the mob went to his house because they wanted to take his family's property. The mob told Masih that he and his family were trespassers in their own home.

Despite the fact that Masih could see that the mob came equipped with weapons, he did not comply and refused to leave his home.

"I was terror stricken, the mob was threatening to kill me and my family. They had weapons in their hands and started to brandish them before me. I thought they would kill all of us," Masih explained. "I refused to leave my home — I had paid for it fairly and they had no right to ask me to leave."

After Masih's refusal, the mob began to beat him with metal rods and sticks. Some of the members of the mob locked Masih and his family inside a room and set the house on fire.

Although the house was destroyed in the fire, Masih was able to rescue his family, which consists of his wife and six children, from the inferno.

"I broke the door down using all my strength, desperate to live and to save my family," Masih explained. "Soon other local Christians came to rescue us. They put out the flames and called the fire brigade."

Masih stated that he paid a million Pakistani rupees (about $9,500) in an oral agreement to purchase the house from a man named Ghulam Ali.

The family had only lived in the home for a couple months when the mob arrived on Sept. 10. Masih believes the leader of the mob was Ali's wife.

The BPCA reports that local police have thus far refused to register a case against mob participants, even though there were eyewitnesses and a written report was submitted to authorities. Additionally, Masih was arrested after Ali filed a FIR against him for allegedly attacking a woman who came to collect rent.

The BPCA noted that a donation campaign has been started to help support the Masih family.

The plight of the Masihs, and the police department's reluctance to hold violent perpetrators accountable, is yet another example of how the rights of Christians are being trampled upon in Pakistan — a country that ranks as the eighth most difficult nation to live in as a Christian, according to the Open Doors USA 2015 World Watch List.

Earlier this year, The Christian Post reported on a 15-year-old Pakistani Christian who died after being beaten and set on fire by two Muslim men because he answered truthfully that he was a Christian when they asked him.

According to prominent Pakistani human rights attorney Sardar Mushtaq Gill, the young boy, Nouman Masih, was walking on his way to a cloth stitching job when he was approached by two Muslim men.

After answering when asked by the men whether he was a Muslim or Christian, the men beat him, chased him down, doused him in kerosene and set him on fire when he told them that he was a Christian. Doctors ruled that Masih's body was 55 percent burned.

CP has also extensively reported on Christian mother of five Asia Bibi who's been held captive in a Pakistani prison and placed on death row on charges of blasphemy after a group of Muslim women accused her of drinking from the same water supply back in 2009.

A U.K. Christian group reports that some attempts are being made to reform sections of the country's controversial blasphemy laws that punish religious minorities. The group also believes that Britain and the U.S. must rethink the way they provide financial aid to Pakistan if they want to see reforms in the country.

"The proposed changes will ostensibly make it more difficult for blasphemy charges to be laid, focusing on proving that any blasphemy was intentional under a legal concept termed Mens Rea translated as 'guilty mind,'" Wilson Chowdhry, president of the British Pakistani Christian Association, told CP back in June.

"However the large number of extra-judicial killings and insouciance from local police to get involved in blasphemy charges or a pattern of local police authorities cowing under pressure from mobs led by local imams, suggest this law change will have little effect."