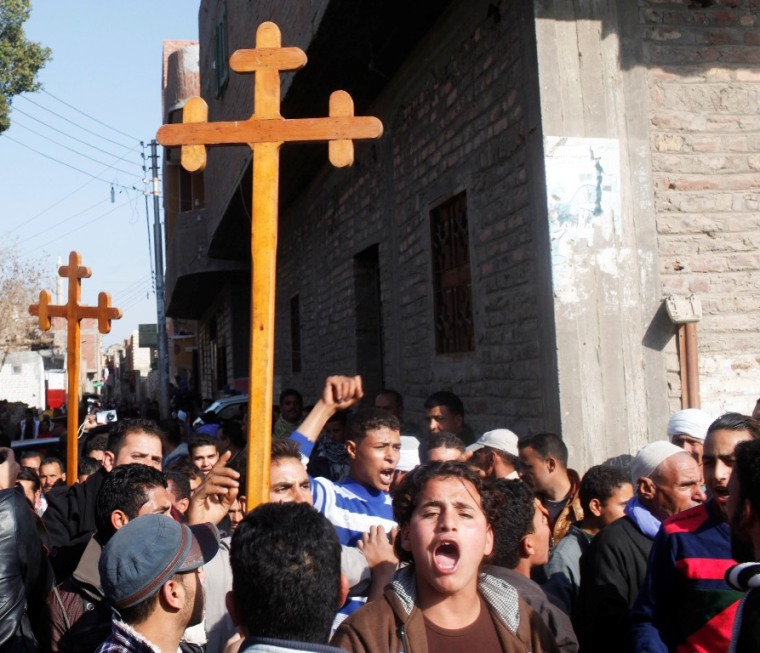 Relatives and neighbours of Egyptian Coptic men killed in Libya chant pro-army slogans during a protest while carrying crosses in al-Our village, in Minya governorate, south of Cairo, February 16, 2015. Thousands of traumatized mourners gathered on Monday at the Coptic church in al-Our village south of Cairo, struggling to come to terms with the fate of compatriots who paid a gruesome price for simply seeking work in Libya. Thirteen of 21 Egyptians beheaded by Islamic State came from the impoverished dirt lanes of al-Our, violence that prompted the Egyptian military to launch an air strike on Islamic State militant targets in Libya. | (Photo: Reuters/Asmaa Waguih) 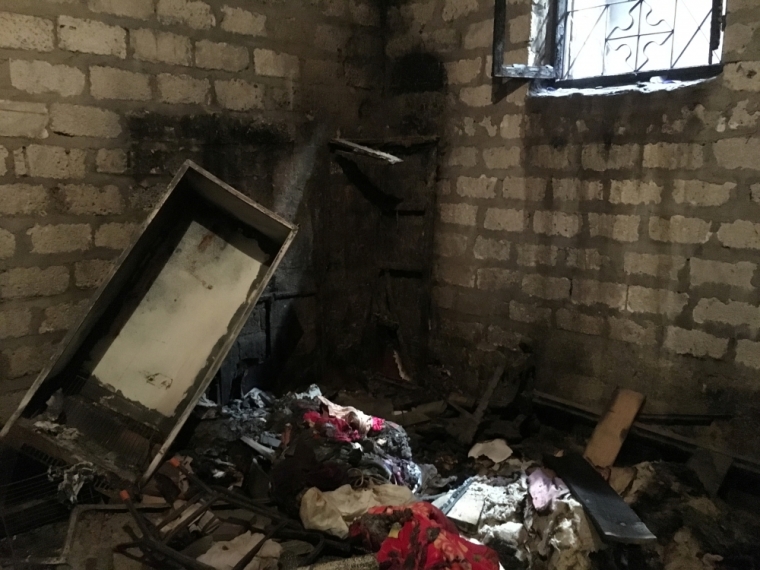 A damaged home belonging to one of seven Christian families, whose houses were looted and set on fire by Muslim men, is seen at Al-Karm village in the southern province of Minya, Egypt, May 27, 2016. | (Photo: Reuters/Ahmed Aboulenein) 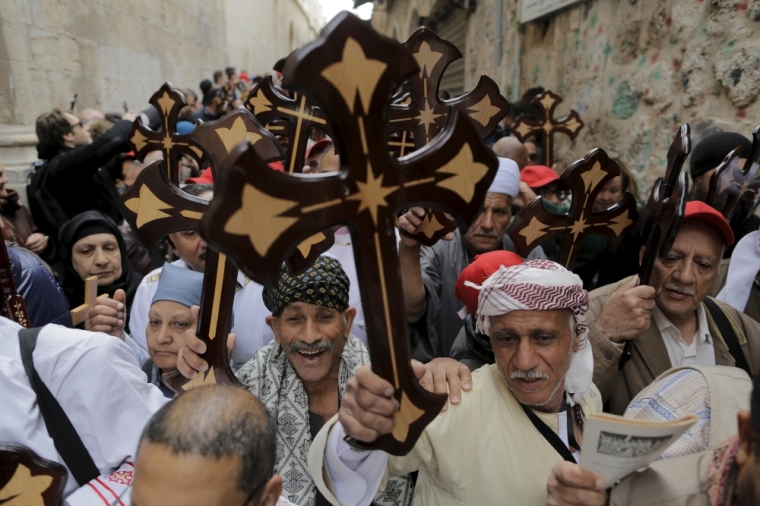 Egyptian Coptic Christian worshippers carry crosses during a procession along the Via Dolorosa on Good Friday during Holy Week in Jerusalem's Old City April 10, 2015. Christian worshippers on Friday retraced the route Jesus took along Via Dolorosa to his crucifixion in the Church of the Holy Sepulchre. Holy Week is celebrated in many Christian traditions during the week before Easter. | (Photo: Reuters/Ammar Awad) 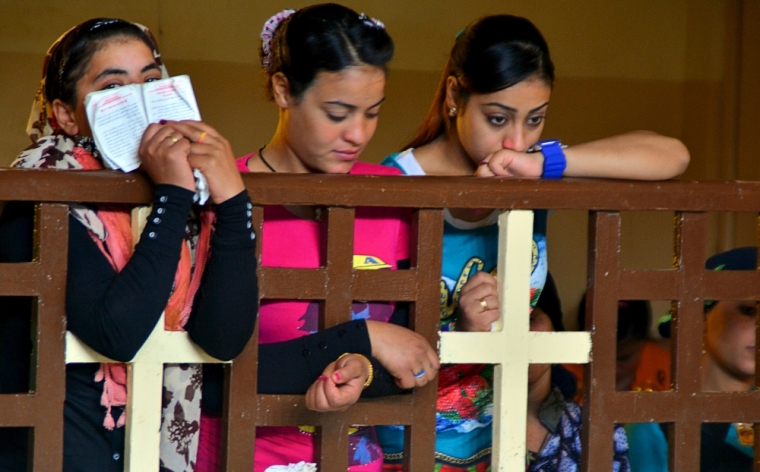 Christians attend Sunday service in the Virgin Mary Church at Samalout Diocese in Al-Our village, in Minya governorate, south of Cairo, May 3, 2015. Copts have long complained of discrimination under successive Egyptian leaders and Sisi's actions suggested he would deliver on promises of being an inclusive president who could unite the country after years of political turmoil. However, striking out at extremists abroad might prove easier than reining in radicals at home. Orthodox Copts, the Middle East's biggest Christian community, are a test of Sisi's commitment to tolerance, a theme he often stresses in calling for an ideological assault on Islamist militants threatening Egypt's security. | (Photo: Reuters/Stringer) 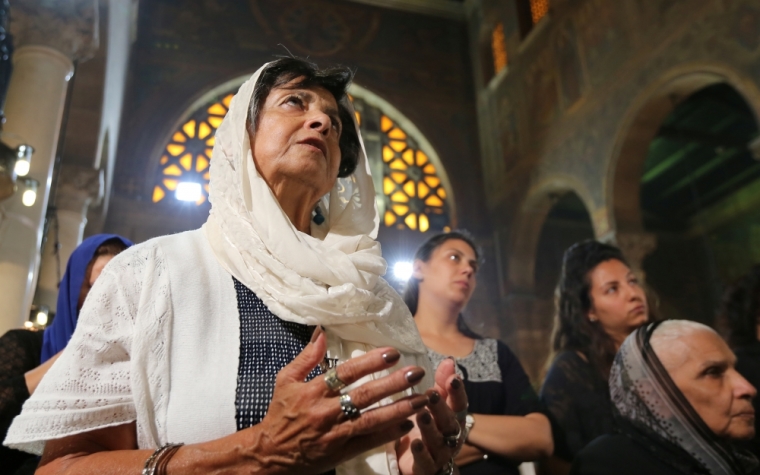 A mob of 300 Muslims has torched at least four Coptic Christian houses in the Kom El Loofy village in Samalout, Upper Egypt, because the Christians wanted to build a church on their land.

"The torching of Coptic homes in Kom El Loofy underscores once more the urgent need for Egypt's House of Representatives to enact a law regulating the construction and renovation of houses of worship in a manner that guarantees the right of Christians to worship in community with others," said Christian Solidarity Worldwide Senior Press Officer Kiri Kankhwende.

"We echo the Bishophric of Samaloot in condemning the imposition of reconciliation meetings as a replacement for the rule of law because they impose ad-hoc, unjust and often un-constitutional conditions on the victims of sectarian violence and perpetuate impunity for the perpetrators. Rule of law must be upheld, and must include security services nationwide serving every community without discrimination on the grounds of religion."

Ashraf Khalaaf, the Coptic man who was accused of wanting to build a church on his land, had reportedly been summoned prior to the arson to the local police station to sign papers promising that he will not use his property for a place of worship. Despite this declaration, the massive mob of Muslims set fire to Christians' homes shortly after.

As CSW noted, the Bishophric of Samalout has said the rule of law must first be applied before any reconciliation meeting can occur.

Coptic Christians in Egypt have faced persecution for their faith for years, both at the hands of some in the local Muslim majority, but also with the rise of the Islamic State terror group, which has spread into the country.

Back in February, Christians marked the one year anniversary of the infamous IS "nation of the cross" video, in which 21 Copts were beheaded.

"One profound result and gift of this horrific act is that it brought people together," Bishop Amba Angaelos, General Bishop of the Coptic Orthodox Church, said at the time.

"These men paid the ultimate price, but gave us a cause to advocate for all those persecuted; they also showed us that there was a level of evil that we must all stand in solidarity against, and a level of courage, faithfulness and defiance that we must all aspire to," Angelos added.

The attacks haven't stopped there, however, and just last week the IS affiliate in Egypt took responsibility for the shooting and killing of 46-year-old Coptic Priest Raphael Mousa in the town of El-Arish.

The terror group later explained that it targeted and killed Mousa for "combating Islam."

Kankhwende added: "We are deeply shocked and saddened to hear of the murder of Father Mousa, and our thoughts and prayers are very much with his family, friends and congregation."