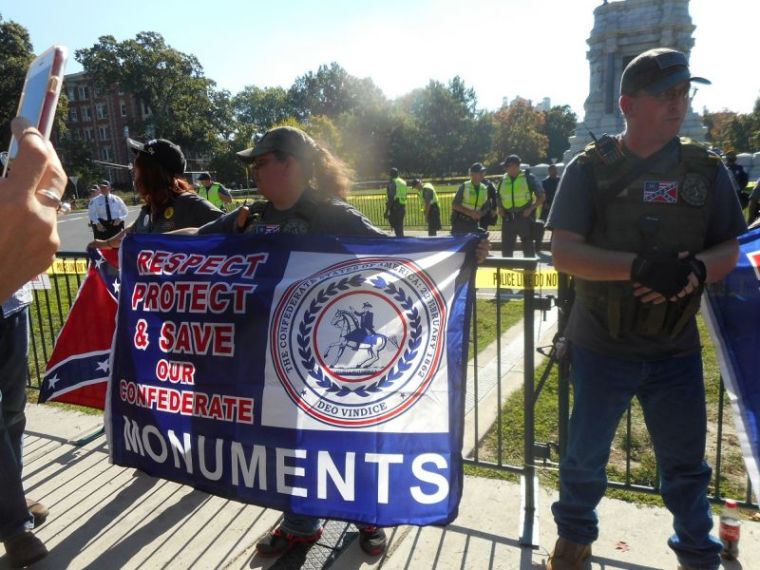 The Tennessee-based group CSA II: The New Confederate States of America held a rally at the Robert E. Lee statue off Monument Avenue in Richmond, Virginia, on September 16, 2017. | (Photo: The Christian Post) 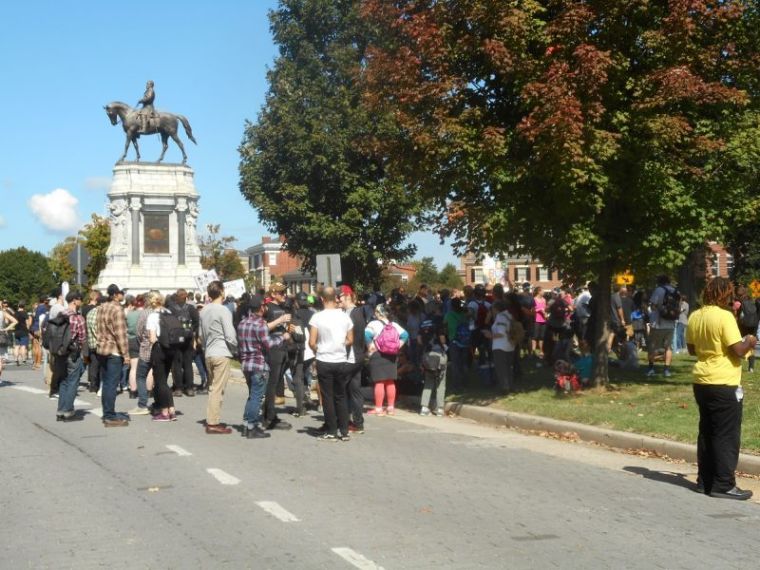 Hundreds gather near the Robert E. Lee statue off Monument Avenue in Richmond, Virginia, to counter a rally by a pro-Confederate statue group from Tennessee on September 16, 2017. | (Photo: The Christian Post) 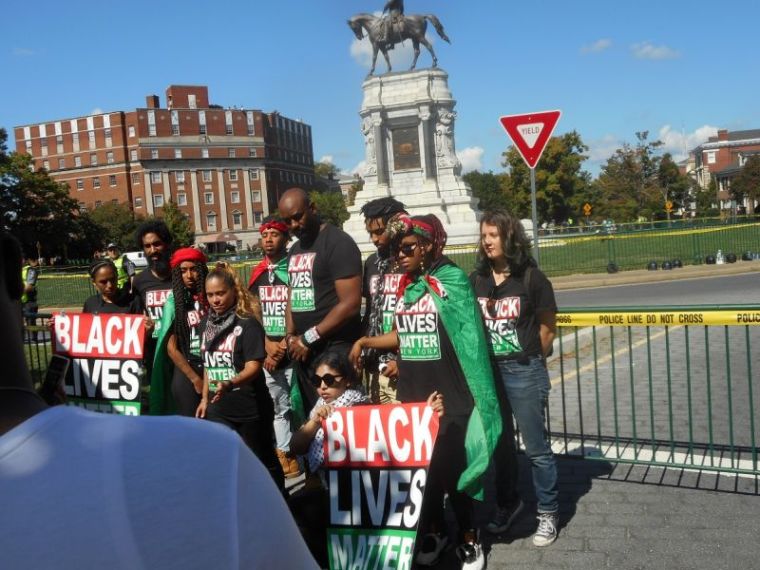 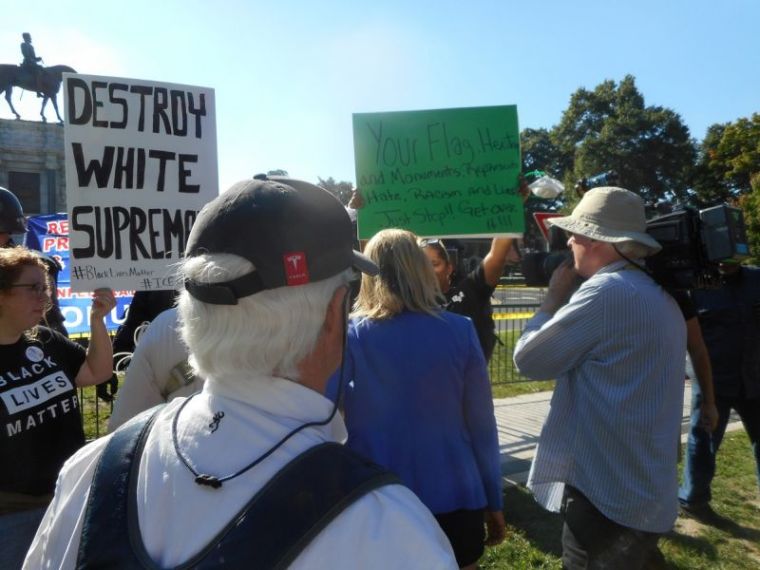 A group of counter-protesters gather in Richmond, Virginia against a Tennessee-based Confederate heritage group holding a rally in support of a Robert E. Lee statue on Monument Avenue. | (Photo: The Christian Post)
View Photos

RICHMOND, Va. — A Confederate heritage group rallying in support of a statue of Robert E. Lee in the former capital of the Confederacy found itself greatly outnumbered by counter-protesters.

The Tennessee-based group CSA II: The New Confederate States of America held a rally Saturday morning at the Lee statue off Monument Avenue in Richmond.

Although the event was scheduled to go until 6 p.m. and was expected to have a large number of attendees, barely a dozen supporters arrived. By noon, the group had already left the area in front of the statue.

In response to the small demonstration, a large number of people came out in opposition, including local residents, students from the nearby Virginia Commonwealth University, a theatre company, and a Black Lives Matter chapter from New York.

Members of an organization called the White Rose Society were present at the event to give out white paper flowers to those in attendance.

Katy Johnson of the Richmond chapter of the White Rose Society told The Christian Post that they wanted to protest the CSA group "in a peaceful manner."

"We figured passing out white flowers, the symbolism from Nazi Germany where protesters would put white roses in the guns of the Nazi soldiers, as a peaceful protest," said Johnson.

Johnson said that while the CSA group was "definitely outnumbered," she was disappointed that more did not turn out to oppose their message.

Calvin, another attendee of the event, told CP that he was in Richmond from out of state for business and felt that there was "a tremendous amount of anger on both sides."

One of the counter-demonstrations was held earlier Saturday morning elsewhere in Richmond at a statue of Maggie Walker located off of West Broad Street and Adams.

The event was chiefly sponsored by the Richmond Peace Education Center, Virginia Interfaith Center for Public Policy, and the First Unitarian Universalist Church of Richmond.

"We embrace and celebrate our rich diversity as a community," read the event's online description. "We stand united in the former capital of the Confederacy in rejecting false 'Lost Cause' myths of the past. ... We stand committed to building a city and a region free of white supremacy."

In response to Richmond's ongoing debate over whether to remove the statues of Confederate soldiers on Monument Avenue, the Tennesse-based CSA II announced that they were holding a rally at the Lee statue in support of keeping the monuments.

The rally came a month after a so-called "Unite the Right" event was held in Charlottesville that was attended by white supremascist groups to protest the removal of a Robert E. Lee statue. That event descended into violence resulting in one counter-protester being killed by a driver who rammed his car into a crowd and injuring several others.

In response to Charlottesville, Virginia Gov. Terry McAuliffe issued an executive order on Aug. 18 banning permits for events at the Lee monument in Richmond, pending a regulations review expected to be completed in November.

However, the suspension of permitted events only applied to the grassy area surrounding the monument and not the street, allowing for demonstrations in certain cordoned off sections.

On the Facebook page for their event, which on Saturday became unavailable, the CSA II stressed that they wanted to hold a peaceful demonstration in support of the Lee statue.

"This rally is a heritage ~ not hate rally and any hate will NOT be stood for on our side whatsoever," stated the details section of the event page.

"We have no intentions of bringing hate or violence to the great city of Richmond in any way. Also, we are NOT RESPONSIBLE for any other group's actions in relation to them utilizing their constitutionally protected First Amendment rights."

The small number of CSA II members were protected by a large police presence, which had cordoned off large sections of the area surrounding the Lee statue.

While the protesters and counter-protesters had the occasional intense verbal exchanges, local police reported that only one arrest had been made, which was for disorderly conduct.

The CSA II event lacked support from other Confederate heritage groups. CP reached out to the Sons of Confederate Veterans about the event, to which they replied that their leadership told their members not to attend Saturday's rally.

SCV's Virginia Division directed CP to a statement on their Facebook page telling members to not attend the Saturday rally, as it was an unauthorized event.

"We cannot afford to have our legal and legislative efforts jeopardized by any actions that could result in a situation like the rally and protests by [extremists] in Charlottesville," stated the SCV.

"The Virginia Division Sons of Confederate Veterans is not and never was a part of this rally and all members are to stay away from this event."