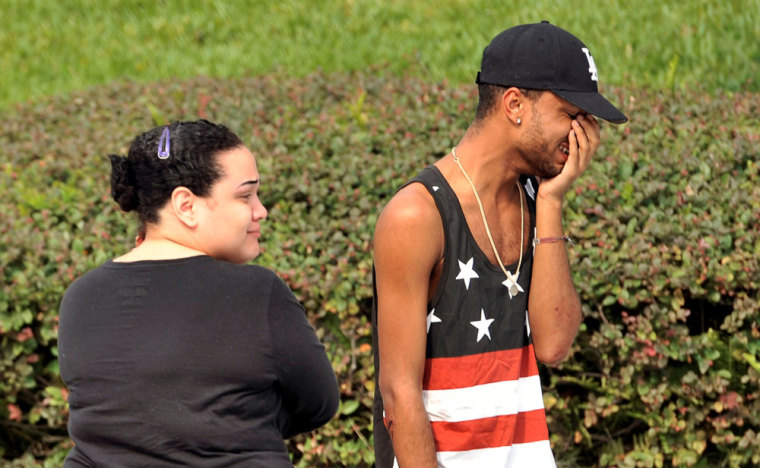 Friends and family members embrace outside the Orlando Police Headquarters during the investigation of a shooting at the Pulse nightclub, where people were killed by a gunman, in Orlando, Florida, U.S June 12, 2016. | (Photo: Reuters/Steve Nesius) 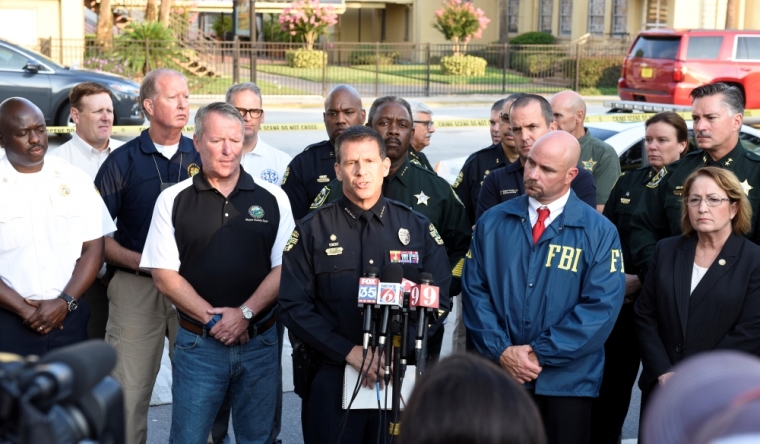 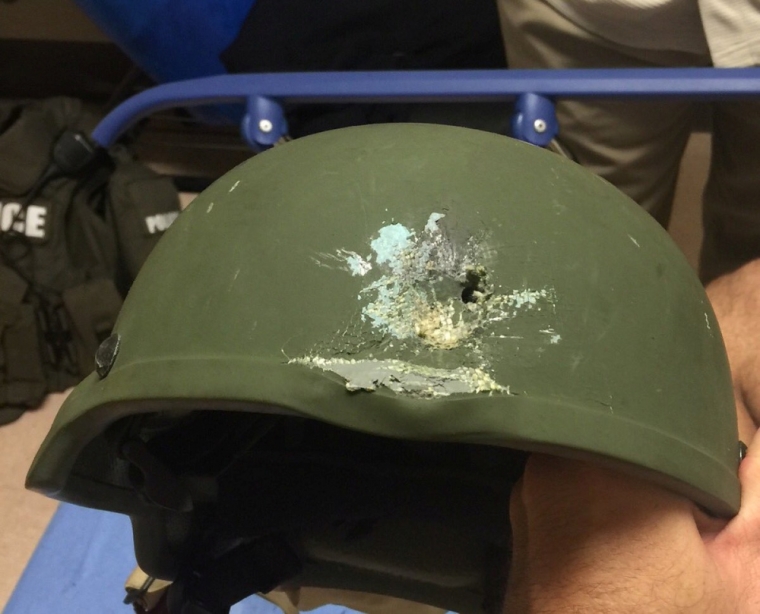 A handout photograph posted by the Orlando Police Department on Twitter with the words, "Pulse shooting: In hail of gunfire in which suspect was killed, OPD officer was hit. Kevlar helmet saved his life", in reference to the operation against a gun man inside Pulse night club in Orlando, Florida, June 12, 2016. | (Photo: Orlando Police Department/Handout via Reuters) 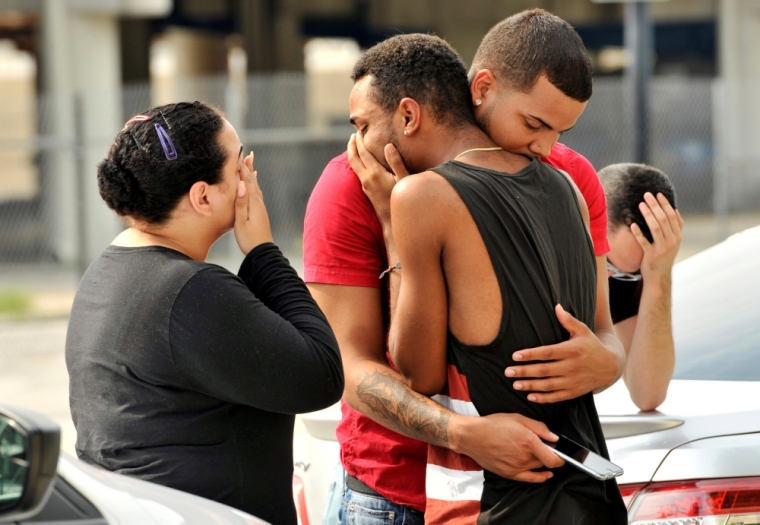 Friends and family members embrace outside the Orlando Police Headquarters during the investigation of a shooting at the Pulse night club, where as many as 20 people have been injured after a gunman opened fire, in Orlando, Florida, U.S June 12, 2016. | (Photo: Reuters/Steve Nesius) 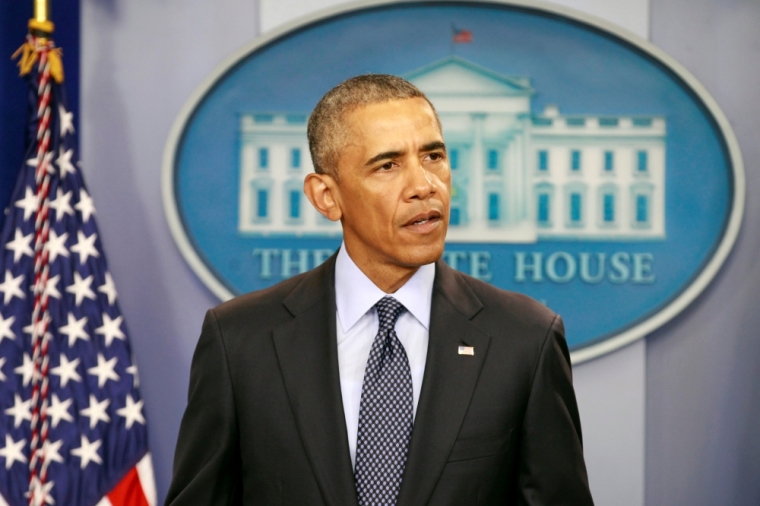 ORLANDO, Fla. — President Barack Obama on Sunday described the worst mass shooting in U.S. history as "an act of terror" and "an act of hate," saying the massacre of 50 people at a packed gay nightclub by gunman Omar Mateen of Ft. Pierce, Florida, was an attack on all Americans.

Islamic State's Amaq news agency said on Sunday that the Islamist militant group was responsible for the massacre.

"The armed attack that targeted a gay night club in the city of Orlando in the American state of Florida which left over 100 people dead or injured was carried out by an Islamic State fighter," Amaq said.

"Today we're dealing with something that we never imagined and is unimaginable," Dyer said, more than doubling an earlier estimate that about 20 bodies were found in the Pulse nightclub.

A police officer working as a security guard inside the club, which has operated in downtown Orlando since 2004, exchanged fire with the suspect at about 2 a.m. (0600 GMT), police officials said.

A hostage situation quickly developed, and three hours later SWAT team officers used armoured cars to storm the club before shooting dead the gunman. It was unclear when the gunman killed the victims.

One officer was injured after he was hit in his helmet while exchanging fire with the gunman, police said.

"Do we consider this an act of terrorism? Absolutely," said Danny Banks, special agent in charge of the Florida Department of Law Enforcement. "Whether that is domestic terrorist activity or an international one, that is something we will certainly get to the bottom of."

Asked if the FBI suspected the gunman might have had inclinations toward militant Islam, including a possible sympathy for Islamic State, Ronald Hopper, an assistant FBI agent in charge, told reporters: "We do have suggestions that the individual may have leanings toward that particular ideology. But right now we can't say definitively."

The FBI said it was still trying to pin down whether the mass shooting was a hate crime against gays or a terrorist act.

U.S. Senator Marco Rubio of Florida told CNN he understood that the gunman had worked for a security company and so would have undergone some background checks.

"Over the next couple of days they're going to be looking to see where this individual was inspired to carry out this horrifying act of terrorism," Rubio said. "I think we're going to be talking about a very different kind of case here soon."

President Barack Obama ordered the federal government to provide any assistance needed to Florida police investigating the shooting, the White House said in a statement.

Javer Antonetti, 53, told the Orlando Sentinel newspaper he was near the back of the dance club when he heard gunfire. "There were so many (shots), at least 40 ... it was constant, like 'pow, pow, pow,'," he said.

Video footage showed police officers and civilians carrying some injured people away from the club and bending over others on the ground. Dozens of police cruisers, ambulances and other emergency vehicles could be seen in the area.

Pulse, which was crowded for a Latin music night, describes itself on its website as more than "just another gay club." One of the founders and owners, Barbara Poma, opened it more than a decade ago in an effort to keep alive the spirit of her brother, who died after battling HIV.

The choice of target was especially heart-wrenching for members of the U.S. lesbian, gay, bisexual and transgender community, LGBT advocacy group Equality Florida said in a statement.

"Gay clubs hold a significant place in LGBTQ history. They were often the only safe gathering place and this horrific act strikes directly at our sense of safety," the group said. "We will await the details in tears of sadness and anger."

Orlando has a population of 270,930 and is the home of the famed Disney World amusement park and many other tourist attractions that attracted 62 million visitors in 2014.

It was the second deadly shooting at an Orlando night spot in as many nights. Late Friday, a man thought to be a deranged fan fatally shot singer Christina Grimmie, a former contestant on "The Voice", as she was signing autographs after a concert. [L1N1930E6]