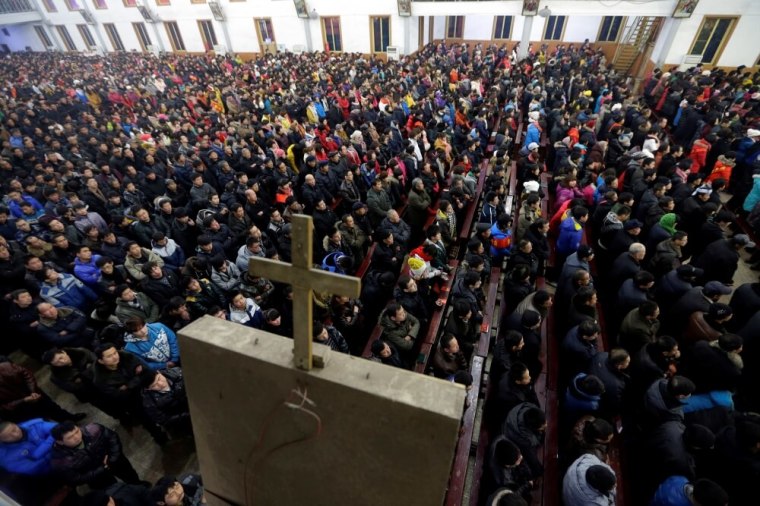 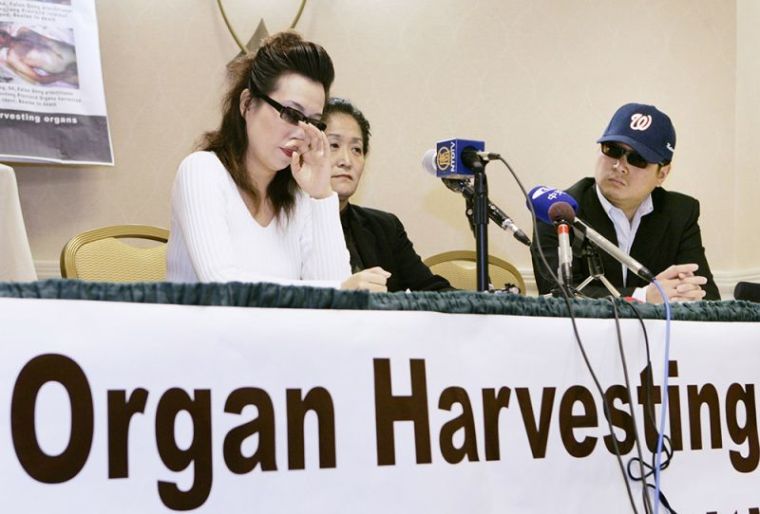 Protester Wang Wenyi (C) sits with unidentified Chinese citizens during a news conference about why she screamed out last week at a White House arrival ceremony hosted by U.S. President George W. Bush for Chinese President Hu Jintao on the South Lawn, in Arlington, Virginia, April 26, 2006. Wang called out to Hu and Bush during the ceremony to stop what she said was organ harvesting from live Falun Gong practitioners in China's labor camps. | (Photo: Reuters/Larry Downing) 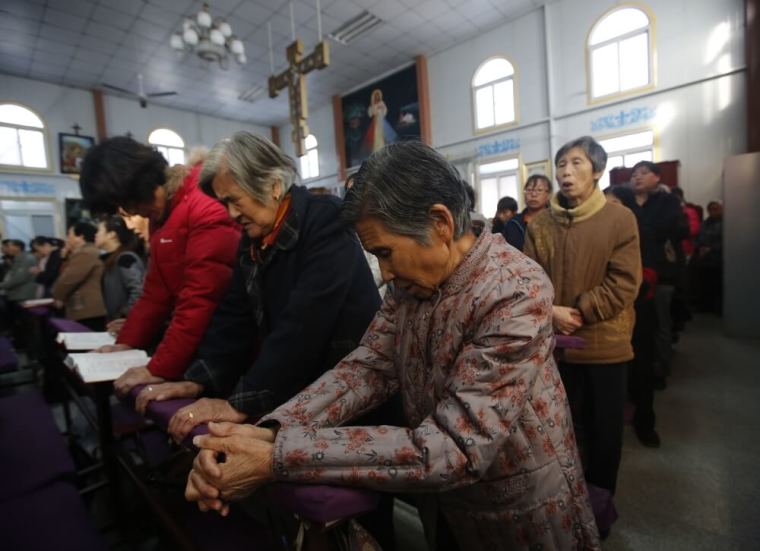 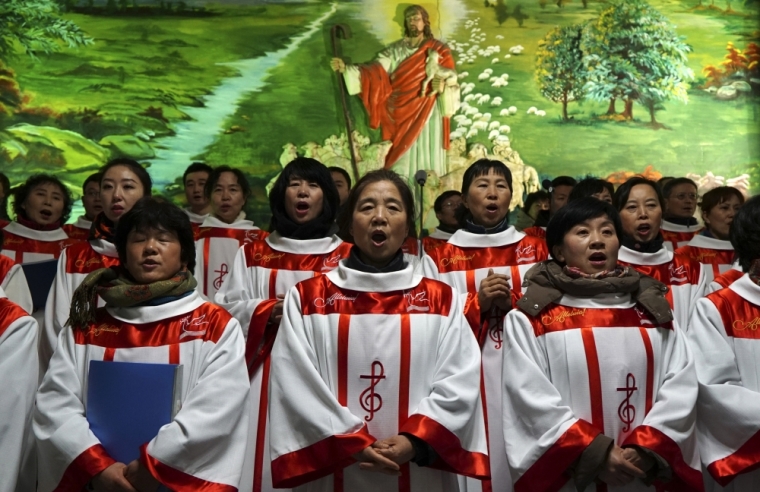 Choristers sing Christmas carols in front of a figure of Jesus Christ, during a mass at a catholic church in Shenyang, Liaoning province, China, December 24, 2014. | (Photo: Reuters/Stringer) 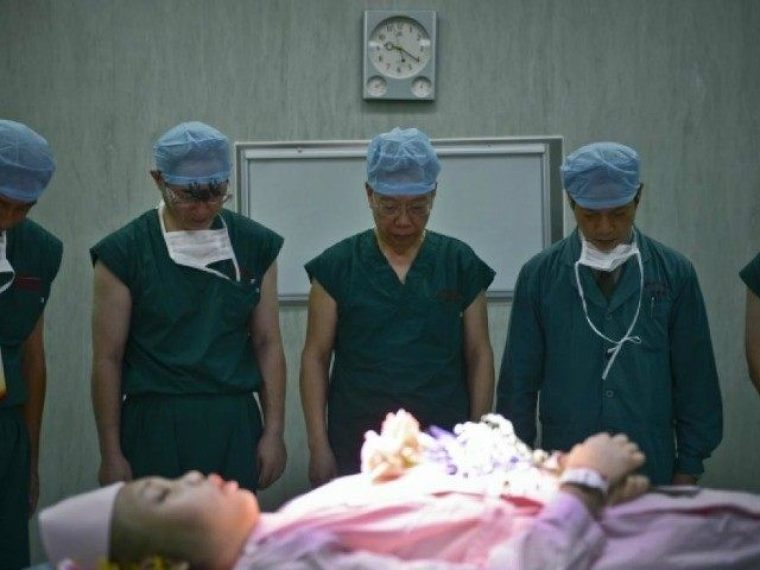 Forced organ-harvesting is a horrendous reality that continues in China, a Christian human rights organization has said in response to a new report on the work of two Canadian lawyers who are exposing the practice.

Bob Fu, founder and president of China Aid, told The Christian Post in an interview on Tuesday that he doesn't have systematic evidence that Christian prisoners are specifically being targeted in the Chinese organ-harvesting scheme, but called for an independent investigation to look into the shocking claims, which Chinese authorities deny.

"This barbaric practice of organs harvesting continues in China. I applaud the enormous work to highlight this issue by the two Canadian friends," Fu told CP, commenting on a report in The Associated Press this week.

The report said that David Kilgour, a former prosecutor and Canadian secretary of state for Asia-Pacific, and David Matas, a human rights lawyer, claim that around 60,000 to 100,000 organ transplants take place in China every year.

The Canadian lawyers, who are urging Australian lawmakers to pass a motion demanding that China ends the controversial practice, have said that the only "plausible explanation" for the sourcing of the organs is that they come from prisoners of conscience, such as Falun Gong practitioners, Muslim Uighurs, Tibetan Buddhists, and Christians.

AP noted that China's legal system makes it hard for such claims to be independently verified. What is more, China has insisted that it has reformed its controversial system and that it no longer harvests organs from executed prisoners.

Huang Jiefu, the director of the China Organ Donation and Transplantation Committee, said in October that the Chinese government has "zero tolerance" for non-voluntary organ transplants, Reuters reported.

"Since 2015, I can guarantee that in our system 100 percent are voluntary citizen donors," Huang told reporters at a conference on organ donation at the time.

"Because China is a big country with 1.3 billion people and regional development is uneven, occasional legal violations are unavoidable," he added, admitting that corruption might still exist in the system.

Kilgour and Matas's work has been highlighted by a number of publications, including Voice of America, and they have published several reports on the issue, including one titled "Bloody Harvest: Revised Report into Allegations of Organ Harvesting of Falun Gong Practitioners in China," which attracted international attention.

"We look at individual hospitals that do transplants through their websites, their publications, their newsletters, their back calendars and patient volume and so on, and at a variety of indicators going hospital by hospital," Matas told VOA in June about their work.

"There are around 900 hospitals that do transplants. We don't give a specific figure but we can say it is much larger than the 10,000 a year — at minimum 60,000 a year and probably more than that," he claimed.

CNN reports that much of the attention has fallen on Falung Gong practitioners, which China brands as a "cult" and accuses of "anti-China political activities" — something which Christians and other religious minorities are regularly accused of as well.

"The Chinese government has been trafficking in organs for profit for far too long and we have strong evidence that Falun Gong practitioners were singled out for organ harvesting," Rep. Chris Smith, R-N.J., who co-chairs the committee, has said.

Some, such as Australian Department of Foreign Affairs and Trade First Assistant Secretary Graham Fletcher, have disputed the work of the Canadian lawyers, however, and argued that "they are not given credence by serious human rights activists," as there is an alleged lack of evidence for their claims.

Fu told CP that the Canadian lawyers are "looking for an explanation" for where the harvested organs are coming from when they report on the possible plight of Christians and other minorities, and pointed to a number of recent news stories of forced organ harvesting.

"Although I do not have systematic evidence showing this is massively practiced toward Christian prisoners of conscience yet, the fact [that] one more high profile prisoner Mr Jia Jinglong's organs were bluntly harvested before he was executed unjustly without any consent from his lawyers nor any of his family members last week should certainly and absolutely warrant an independent investigation by a credible international panel," he added.

BBC News reported on Jia Jinglong's plight earlier in November, noting that the Chinese villager was executed for killing the village chief, despite a major public campaign calling on his sentence to be commuted due to extenuating circumstances.

The China Aid President, whose U.S.–based organization investigates the ongoing government crackdown of Christians in China, said that such an independent investigation is "long overdue," insisting that despite the Communist Party's denial, organ harvesting has not ended in China.